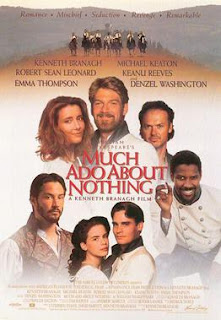 From the opening you pretty much know you are in safe hands. Branagh loves the vibrant excitement of cinema, and delights in bringing the meaning out of Shakespeare’s text. Both ideas are central to the opening of the film, with Emma Thompson’s luscious reading of “Sigh No More”, while the camera pans across a bucolically blissful Tuscan setting. This feeds straight into Beatrice’s playful banter with the messenger – and Richard Briers gives the first indication of the film’s attention to small character details with his “don’t go there” look when the messenger tries to correct Beatrice’s teasing defamation of Benedick. From there the film explodes into a triumphant Magnificent Seven style arrival of Pedro’s lords on athletic horseback (backed by Patrick Doyle’s inspiring overture), while Leonato’s household excitedly (in a typical Branagh tracking shot) prepare to greet them, before an overhead crane shot introduces the two groups meeting in a courtyard. Everything you need to know about the sort of film you are getting – and Branagh’s ability to marry the language of cinema with the language of Shakespeare – is right there.

Branagh’s setting of the play in a golden Tuscan villa is perfect for both its playful, relaxed, soldiers-back-from-the-war plot line and the heated romances and jealousies that fuel the plot. Is it any surprise feelings are running high in such a sultry and hot climate? The two worlds – the army men and the people of Leonato’s household – are immediately clear. And the setting communicates the film’s mood – fundamentally bright, sunny, cheerful. Kick back your heels, you are being taken on a high-spirited, exotic holiday. 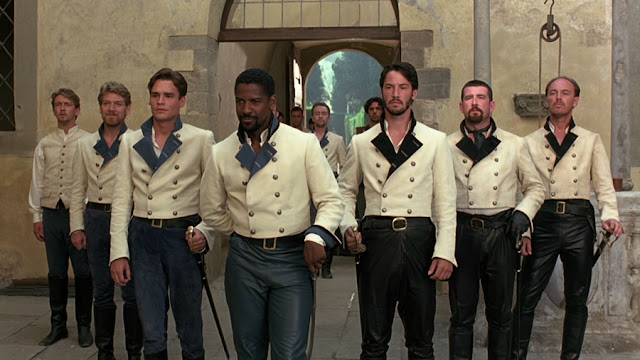 In this playful setting, Branagh invariably gets the tone just right. Shakespearean comedy is so reliant on live audience reactions, on bouncing off the audience, that creating this on film without that live element is really difficult. Trust me, watch any number of BBC Shakespeare comedies (don’t worry I’ve done it for you) and you will see immediately how hard it is to get that bounce and comedic juice out of these shows. Branagh gets it spot on here – the characters are so likeable, the delivery of the actors so assured, the spirit of the film so light yet perfectly controlled, that the comedy lands nearly every time. Above all, the actors look like they had a whale of a time making the film – and that enjoyment completely communicates to the audience.

The gulling scenes of both Beatrice and Benedick are expertly played and hugely entertaining: Branagh skilfully cuts them to fast-paced essentials, and then gets the best possible comic mileage out of them – from skilled cut-away shots for reactions to wonderful ensemble playing (Briers in particular is superb as a Leonato slightly out of his depth in trickery). It’s easy for the Beatrice gulling scene to fall a little short after the Benedick one – but, largely thanks to Emma Thompson’s excellent performance, that certainly doesn’t happen here.

But Branagh understands Much Ado is not just a comedy: it comes perilously close to being a tragedy. For at least an act of the play, our heroes are at loggerheads, and murder and death are almost the end results. From Claudio’s explosively violent reaction to Hero’s perceived betrayal at the wedding to Leonato’s furious denunciation, horror and danger are ever-present. This then leads us into Beatrice and Benedick’s wonderful post-wedding. Branagh sets this in a small chapel – adding an echo of marriage vows to the understanding the pair reach – and Thompson’s passion, fury and pain are met (for the first time) with quiet, mature understanding from Branagh’s Benedick. Thompson’s order for Benedick to “kill Claudio” carries a fiery conviction that chills. It’s a brilliant scene.

A lot of this works so well because of the brilliance of the acting. Branagh is charming, very funny and mixes this with a growing emotional depth and maturity as Benedick. But the film belongs to Emma Thompson who is quite simply astounding as Beatrice – surely one of the greatest performances of the role you will catch. She is the soul of the movie, at turns playful, frustrated, joyous and consumed with grief and rage. She speaks the lines (needless to say) with absolute clarity and emotion, but even more than that her intelligence dominates the movie. You can’t take your eyes off her. 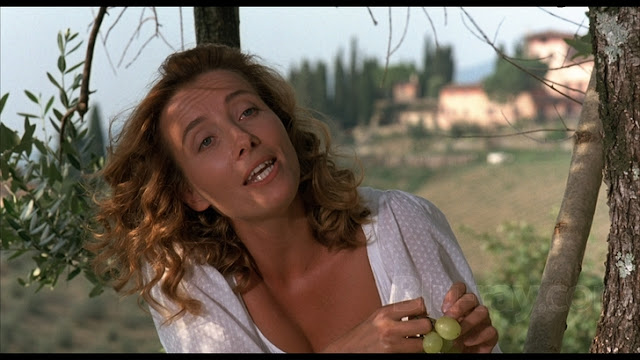 But this is a very strong cast of actors, the best mix Branagh got between Hollywood stars and his regular players. Denzel Washington is simply perfect as the noble but strangely distant Pedro (his moments of isolation at the close of the film are as touching as they are unsurprising). Richard Briers gives some of his best work in a Branagh film as a Leonato, moved to great emotion and feeling. Leonard and Beckinsale are perhaps not given huge amounts of interpretative depth, but are very lovable. Gerard Horan is very good as a swaggering Borachio.

It’s easy to knock Keanu Reeves but – aside from his untrained voice, which makes him sound duller and flatter than he actually is – his Don John is actually pretty good. As a physically very graceful actor he completely looks the part, and he glowers and fumes with all the intensity you could require – and after all, Shakespeare didn’t give Don John much more to do than that.

No the real problems with the production – and the parts that don’t work – are Dogberry and Verges. Now I can see what Branagh is trying to do here: the malapropisms of Dogberry’s dialogue are rarely, let’s be honest, that funny, and would work even less well on film. But the decision to make Dogberry and Verges a cross between Monty Python and the Three Stooges doesn’t really work. Michael Keaton is giving it his all here to try and get some humour out of this – but his straining for every laugh, combined with gurning over delivery, bizarre accent and physical over-complications, just deaden every single Dogberry scene. These scenes largely flop.

But it doesn’t matter when every other scene in the film works so damn well. And, however much you might drift away during the Dogberry moments, the rest of the film will capture your heart and mind every time. Filmed with a luscious richness and stylish confidence, this is a ravishing and flamboyant film that will never fail to entertain. By the time the final reconciliation has happened, and the house erupts into a joyous celebration party – filmed, with astonishing chutzpah, as a single take, staggering in its complexity, that covers close-up, tracking shot and huge crane shot – while Patrick Doyle’s score gives a swelling version of Sigh No More, you’ll be in love yourself. And if not – well look to yourself.
Email ThisBlogThis!Share to TwitterShare to FacebookShare to Pinterest
Labels: 1993, Brian Blessed, Denzel Washington, Emma Thompson, Imelda Staunton, Kate Beckinsale, Keanu Reeves, Kenneth Branagh, Michael Keaton, Richard Briers, Robert Sean Leonard, Romantic comedy, Shakespeare