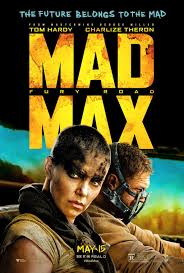 Sometimes films seem designed to give you a visceral thrill, to throw you into an experience and see whether you sink or swim. To pull off that sort of hard-edged momentum, you need a film-maker skilful enough to create an addictive energy that never slackens and never gives you a second to question the film while it’s going on. Mad Max: Fury Road has such a director in George Miller, and its demented, high-octane excess, married with a film-making style that felt modern, vibrant and grounded in reality, surprisingly made it one of the most acclaimed films of 2015.

In a post-apocalyptic future Australia, the world is a ruined desert and basic requirements like water, greenery and fuel are more valuable than anything. In a rocky outcrop, cult-leader Immortan Joe (Hugh Keays-Byrne) rules one of the few populations by controlling access to the water. “Road warrior” Max Rockatansky (Tom Hardy) is captured by Immortan Joe’s warriors and put to work as a “blood bag” to transfuse into Immortan Joe’s warriors. However, this coincides with a planned escape by Immortan Joe’s wives (the few remaining women capable of conceiving children). Led by road warrior Imperator Furiosa (Charlize Theron), the women flee to find a mysterious paradise in the wilderness. Cue an almighty chase and running battle between Furiosa’s road carrier and Immortan Joe’s forces, desperate to reclaim the wives.

Mad Max: Fury Road is a bizarre, extreme, surreal thrill ride, a high-octane road chase, crammed with action, thrills and dynamism. It’s directed with extraordinary vibrancy by George Miller, who makes it fresh and scintillating. Miller crams the action and design with an explosion of style. Everything is amped up to 11, from the look to the characterisations and motivations. But what makes this such a well-directed film is that Miller shoots much of it with careful, professional clarity: so many other films would be cut with a frantic craziness, but this has a polished traditionalism to it. Basically Miller knows the actual content of the story is “insane” enough that he doesn’t need to gild the lily with bizarre, swooping camera angles or choppy editing.

That’s partly why this film has had such a strong positive reaction. While being insanely OTT, it’s actually quite an old-fashioned piece of film-making, and it looks like a lot of it was shot for real on location, using real practical stunts. This may or may not be the case, but it certainly looks like this. And in an era where so many action films are about superheroes, and crammed with special effects, to have a world where things feel grimy and real, where the objects we are watching feel like they exist, is like a breath of fresh air. The design throughout the film accentuates this sense of reality. It makes things feel like they have depth and force. It immediately adds stakes to the action.

That action takes place in a unique looking world. The visuals in this film are crazy. The design of Immortan Joe’s half-nude soldiers, with their silver paint aerosol and petrol smeared faces, is terrifyingly cultish. The look of the many different vehicles is immediately striking, with each being clearly of the same world, but each distinctive in look, like some Wacky Races. The steampunkish mix of cobbled-together remains of technology to create the cars and trucks is brilliantly done. It’s a film that looks like nothing else, and shot with radiant streaks of yellows and blues, mixed with scenes shot in almost painterly black and white. It’s an explosion of style, but not straining too hard to force itself upon you like so many films do.

The film also has a simple structure and storyline, that allows it to focus on the action. It’s slick, steamlined and very focused. The villains are clear, and their motivations easy to understand. They are presented with a certain depth, but their essential villainy is easy to have a gut instinct against. This also helps us bond with our heroes – despite the fact that most of the wives have only the most briefly sketched of characters. But we totally understand their position, fear and desire for freedom. Just as the film is a primal explosion of “fight or flight”, so are the feelings our heroes carry. Everyone can relate to them.

It’s also great that this is an action film where the women largely drive (literally!) much of the action. The film may have the Mad Max name on it, but the true lead of the film is Furiosa. It’s her actions that drive the film, it’s her conflicts that are at its heart, the film is her journey and Max is largely along for the ride (again literally!). Charlize Theron is very impressive in the lead, a strong warrior woman, but also someone with a buried poetic soul and a clear emotional arc. Tom Hardy delivers as the grizzled Max, but this is very much Theron’s film.

Mad Max: Fury Road is an exciting and engrossing film. But it’s made with such professional inspiration on the visuals that it invites people to read into it a lot more depth than I think is actually there. It’s got such old-fashioned control and brilliance to it, while being so explosive and vibrant, that it’s tempting to read into it a thematic complexity. Let’s be honest, this is a chase movie. It’s a hell of a chase movie, but it’s a chase movie.

It may be set in a world of post-apocalyptic totalitarianism, but it’s not trying to tell us anything hugely original about what such a world may be like. It creates such a world with huge inventiveness, but it’s not an enlightening film. Similarly, this is a film that places women at the centre of its action, but I’m not sure you could call it a film that has much to say about feminism. Most of the women in this film are still defined primarily by their breeding abilities. Furiosa may be the leader, but most of the rest of the women are under her protection. The film does something different with gender, but it also does a lot of quite traditional things.

It’s really tempting to see great symbolism in such a dynamic and striking piece of film-making. But thematically there isn’t much there. Miller directs a film that is brilliant too experience, so brilliant you expect there to be more at its heart. In truth there isn’t really – it’s largely what it appears to be on the tin. There’s nothing wrong with that though. You just need to know what you are going to get. This is not some great game changer of a motion picture, that will reinvent and reposition the genre. It is a skilfully made and compelling chase movie, where a group of people run to a point, turn around and head back, being chased all the way. It’s shot with a near poetic, old-school brilliance – but it’s still just a chase movie. Accept it as that – a high-octane action thriller – and you will be swept away. Look to it for the thematic depth some have claimed it carries and you will be disappointed.
Email ThisBlogThis!Share to TwitterShare to FacebookShare to Pinterest
Labels: 2015, Action Films, Apocalyptic dramas, Charlize Theron, Dystopia, George Miller, Nicholas Hoult, Rosie Huntington-Whiteley, Science fiction, Thrillers, Tom Hardy