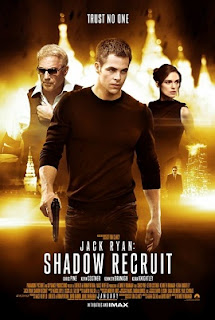 Jack Ryan is the all-American, ordinary-analyst-turned-CIA Agent at the centre of the late Tom Clancy’s books. He’s been played by a range of actors, from Alec Baldwin to Ben Affleck via Harrison Ford, but his character remains the same – a boy scout, a man of principle and simple courage, pushed to do what must be done. He’s smart and quick-witted. Jack Ryan: Shadow Recruit was meant to serve as another reboot, to restart the Jack Ryan franchise after a mixed reception to Ben Affleck’s The Sum of All Fears. Sadly, it was another false start.

An origins story, it opens with Ryan (Chris Pine) studying at the LSE, before joining the marines in the wake of 9/11. He is critically injured in a helicopter crash, where he hauls two men from the wreckage while suffering from a broken back. Learning to walk again, he falls in love with Dr Cathy Muller (Kiera Knightley) and is recruited as a financial analyst by Thomas Harper (an effectively gruff but charismatic Kevin Costner) from the CIA’s Department of Making-Sure-We-Don’t-Get-Hit-Again (catchy name). Collecting financial intelligence while working as an auditor at a Wall Street firm, he notices some worrying financial deals from funds controlled by Russian tycoon Viktor Cherevin (Kenneth Branagh). Going to Moscow under the guise of auditing Cherevin, he and Cathy quickly find themselves embroiled in a dangerous terrorist conspiracy.

Jack Ryan: Shadow Recruit is decent fun. It’s also a rather impersonal and safe piece of film-making, that structurally and creatively feels like a 1990s action film reset in the 2010s. In a world of Jason Bourne, it genuinely feels a little old-fashioned and uninspired. It takes recognisable elements from dozens of action films and remixes them with a certain flair, but not a lot of imagination. It feels like the least “Branagh” film Branagh has directed, the camerawork being surprisingly restrained and contained considering his love of sweeping opera and dynamic, showy visuals.

But Jack Ryan is not a bad film, it’s just an enjoyably average one. It puts Ryan front-and-centre of the film, and Chris Pine really delivers in establishing Ryan’s old-fashioned principles of right and wrong, his sense of duty and his willingness to do what needs to be done when called. Pine also does a great job of demonstrating Ryan’s fear and panic as he finds himself increasingly out of his comfort zone – not least in a terrifying hotel bathroom brawl with an under-used Nonso Anonzie – in the aftermath of which he drops his mobile while trying to call for backup, and then can’t remember where the hell “Location Gamma” is when told to report there to meet a contact.

Of course, this incarnation of Ryan as an analyst rushed into the field doesn’t last, and the film succumbs from there to turning Ryan into an old-school action man, the sort of guy who drives cars at 85 mph through Moscow streets with ease, jumps on a motorbike and roars off in pursuit of a bomb with maverick self-assurance and takes on a trained assassin with a Die Hard-ish confidence. It’s a shame that the interesting character work of the first 2/3rd of the movie gets lost in the final third – but it’s another sign of the film delivering what it feels an action film should be rather than finding something unique and original.

At least Pine gets some good material to work with, which is more than can be said for Kiera Knightley. For all her American accent, this is Knightley at her most British Rose, her toothy, coy grin ever-present in every scene – and that’s about all she contributes. Not that this is entirely her fault, since Cathy is a character sketched on a fag packet, a successful doctor who obsessively worries that her husband is having an affair, making her feel weaker and needier than the filmmakers perhaps realise Later she exists to be a Damsel in Distress, and is then given a spurious involvement in identifying the villain’s target – which she identifies not because it is a medical facility she is familiar with, or perhaps somewhere she visited as a child or on a professional call-out, but solely because Her Man works there. (As if these CIA geniuses couldn’t work out that a financial terror attack on the US might be targeting Wall Street). 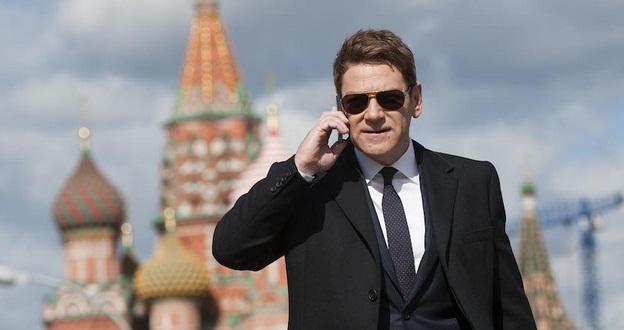 The villain’s plot is dully labyrinthine, but can be safely boiled down into having something to do with financial chicanery and a bombing attack, to destroy the US economy. Not that it really matters – it allows a suitable mix of booms, bangs and the sort of tense “breaking into the office to download the files against the clock” sequence that you’ve seen several times before. Kenneth Branagh cuts himself a bit short with Cherevin, a character who seems sinister but is really barely competent and hits every villain trope from pervy leering to executing an underling. We barely get any sense of his motivations or his background.

He’s also probably the only Russian nationalist in the world who is a Napoleon Bonaparte fan. Last time I checked, Napoleon was the enemy in the War of 1812 that redefined Russian history for the next 100 years. But then I’ve read a few Napoleonic era books, so I’m biased… This film clearly knows nothing about Bonaparte, with Ryan declaring at one point that the planned attack is “straight out of Napoleon’s playbook” – how Napoleon’s trademark fast movement and combined use of infantry and artillery, drilled to perfection, relates to a basic distraction strategy I don’t know but never mind. But then this is a dumb action film that name checks Napoleon because you’ve probably heard of him, rather than because it makes sense.

There is a lot to groan at, or say meh to, in Jack Ryan. But yet, I’ve seen it three times and it grows on me each time. Chris Pine is a very likeable screen presence, and the build-up of the film works well. Branagh directs it with a taut efficiency, even if it’s a film that lacks any real inspiration and feels like one for the money. But it presents its 1990s-style action beats with enough conviction and sense of fun that you kinda go with it. Yes it’s totally forgettable, but run with it and you’ll find yourself strangely charmed by it.
Email ThisBlogThis!Share to TwitterShare to FacebookShare to Pinterest
Labels: 2014, Action Films, Chris Pine, Colm Feore, Franchise Killers, Jack Ryan, Keira Knightley, Kenneth Branagh, Kevin Costner, Mikhail Baryshnikov, Nonso Anozie, Spy thrillers