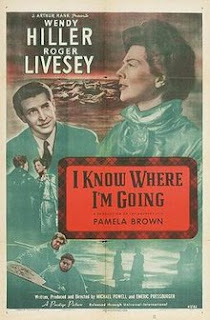 Joan Webster (Wendy Hiller) is a young middle-class woman with ambitious aims who has worked to secure a marriage to a wealthy, much older, industrialist. En route to the wedding in Scotland, she gets stranded on the Isle of Mull by a storm. There, she finds a world of very different values and principles than her own. She also finds herself thrown together with naval officer Torquil MacNeil (Roger Livesey) a man trying to return home for leave. Trapped on the island for days, Joan and Torquil find themselves romantically drawn together – however much Joan tries to avoid it.

Powell and Pressburger’s films all have a sense of filmic magic to them. They are the sort of films it’s very easy to fall in love with, and swear by. I Know Where I’m Going falls into that model extremely well – a dreamy romance in a stunning looking Scottish island, full of engaging characters and beautifully filmed. It’s a seemingly simple romance story, but it feels like a deep and engaging fable – it’s a film that shows how throwing a little uncertainty into a life can be a good thing.

Because Joan Webster categorically knows where she is going. The film’s entire build-up centres around her ambition and overwhelming focus. She literally dreams about marrying the engineering firm (yup that’s right, the firm itself not the man). She pushes her father into putting together a detailed itinerary for her entire journey. She seems to have no self-doubt whatsoever. So the magic of the film is that, deep down, it’s a about a woman realising that the place she has spent her whole life going, isn’t in fact where she wants to go. And the audience can see right away that she wants something else – much quicker than her!

This works because Powell and Pressburger get the romantic feeling of the island and its people so spot on. It’s very easy to get this Monarch of the Glen style Scottish idyll stuff feeling wearing and tedious. But somehow, it just sort of clicks. We don’t get the islanders’ charm and love of the simple life rammed down our throats, we just see how they behave and their simple contentment – and of course we have it compared all the time with Joan’s ruthless ambition. This combines really well with Powell and Pressburger’s lyrical style, their semi-magical romantic camera shots making the island seem hugely attractive (even when it is lashed with wind and rain).

By contrast our brief impression of the world outside Scotland seems cold and mechanical. It’s all offices, impersonal train booths, and besuited chaps giving stiff-collared responses. In a neat piece of cross cutting, one businessman even appears as if he has train steam puffing out of his top hat, like some human train. But we have hints that Joan has more romance under her skin than she would like to admit: as the train moves into Scotland (the film makes no real attempt at realism for its train shots) Joan dreams of the landscape they move through like some sort of tartan vision, with hills made of patchwork quilts. It’s one lovely image.

Then we have the arrival on the island – it’s got a charming, breezy openness about it. Out first introduction to Pamela Brown’s radiant Catriona is on a rainy hill with a pair of wolf hounds, before she bursts into a room (low angle cameras make her look even more romantic). Could the contrast with the mechanism of the rest of the world be more precisely made? There is a charming lack of interest in worldly affairs – the people are “not poor, they just haven’t got any money” – and what could be tiresome scenes set in ceilidhs and the like actually carry a lot of charm with them. Compare the vibrancy the islanders greet life with with the distant coldness of the wedding guests staying there – which group looks like the people you would like to spend time with?

The other thing that really works is the romantic relationship between Joan and Torquil doesn’t feel forced, or jump through too many clichéd hoops and feels organic and natural. The actors have fantastic chemistry, and the film playfully places them in a number of situations that drives this unspoken interest. It’s got more than a touch of screwball comedy about it – two people trapped together, one of them with mounting frustration – despite not really, as such, having a plot.

Wendy Hiller is superb as Joan Webster – she brings a Katherine Hepburnish quality to the role: a determined, modern woman, a control freak in a situation where she has no power at all and hating every minute of it. What really works though is her own lack of self-knowledge. It’s clear to the viewer (and most of the characters) she is developing a deep attraction to Torquil, but Hiller makes it clear that Joan is completely unaware consciously of this. It’s a marvellous performance, totally relatable and hugely endearing, despite Joan’s ruthless certainty, because it’s always subtly puncturing that certainty with doubt.

Roger Livesey makes a perfect countpoint as Torquil. It’s a perfect role for him – a twinkly people-person, old-fashioned but not a stiff-upper lip cold-fish, who has dedicated his life to service, but can still enjoy himself. He also, in a way that many men in films of the time don’t, wears his feelings close to the surface. It’s clear he is in love with Joan from an early point, and every beat of his body language indicates this. At the ceilidh he can barely take his eyes from her – while his body language subtly (but not possessively) indicates his interest. He has an old-fashioned, casual, scruffy charm to him that never gets wearing. He’s also superb.

You’ve got a beautiful romance at the centre, with two characters it’s very difficult not to end up caring a great deal for. Beautifully acted – Pamela Brown is marvellous and Finlay Currie suitably gruff – it’s a film that feels distinctive, that makes charm and playfulness never feel wearing. Not much happens, but it’s beautiful, very sweet and extremely charming. You warm to these characters, and Powell and Pressburger create a world that feels incredibly attractive. There is some fine film-making here – from imaginative dream sequences, to intelligent visual choices that quietly influenced anyone making a film about the romance of the simple life. A little known treat.
Email ThisBlogThis!Share to TwitterShare to FacebookShare to Pinterest
Labels: 1945, British Films, Emeric Pressburger, Finlay Currie, Michael Powell, Pamela Brown, Roger Livesey, Romance films, Wendy Hiller