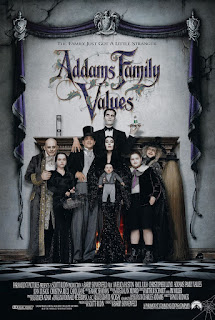 The Addams Family was a serviceable family comedy about a bizarre group of Halloween style characters, who delighted in leading lives of cartoony horror. It drifts along, and was a big hit, but its sequel Addams Family Values is several times smarter, more confident and funnier. As a comedy family saga mixed with cartoon creepiness, it’s hard to beat.

Celebrating the birth of their new child (“He has my father’s eyes” / “Take those out of his mouth”), Morticia (Anjelica Huston) and Gomez (Raúl Juliá) hire a new nanny, Debbie Jellinsky (Joan Cusack) to care for the baby. On her advice, they also decide to send the insanely jealous Wednesday (Christina Ricci) and Pugsley (Jimmy Workman) to a summer camp – needless to say they do not fit in with the All-American, Apple-Pie ideals championed there. Debbie meanwhile has wicked designs on becoming the widow of their rich Uncle Fester (Christopher Lloyd).

Addams Family Values gets a lot of comic juice out of some very witty set-ups. Everyone involved in the film feels more relaxed and happy to let the comedy breathe. Sonnenfeld lets the set-ups come naturally and allows the characters to come to the fore. Every joke in the film comes from watching the characters bounce off their circumstances. Of course, a lot of this comes from the fact the film doesn’t need to do any of the heavy lifting of introducing the world or the characters – it rightly assumes we know what we are getting from the start – but it still makes the film hugely entertaining.

A lot of the humour comes from the brilliant summer camp plotline, with its passive-aggressive, jolly-hockey-sticks owners (a very funny Peter MacNichol and Christine Baranski) and their naked favouritism for the popular kids. Placing the Addams children into a world of normal teenage politics and the forced jollity of adults who would rather still be one of the popular kids at school is a brilliant touch. This clash of values makes for no end of comic glory, culminating in a disastrous Thanksgiving play, which is a triumph of the sad and overlooked over the popular kids (because who watching any film favours the popular kids?).

Christina Ricci is brilliant in this – her deadpan sense of comic timing is spot-on. Every scene and every one-liner is stand-out. The film even finds time for a sweetly semi-romantic plotline between her and loser Joe Glicker (David Kumholtz, also very good as the kind of kid who likes to read A Brief History of Time). Ricci ends up carrying a lot of the film’s comic material, and she’s so perfect in the role that to a lot of us she will always be Wednesday Addams, never mind what she does.

The summer camp plotline is so dropdead funny and memorable, it rather overshadows the film’s actual plot about Debbie’s attempts to seduce and murder Fester. Sonnenfeld struggles to make this main plot come to life – his real delight is in the sketch-based comedy of the summer camp and the Addams’ love for the grotesque and the extreme. Having said that, Joan Cusack is wickedly sexy and funny as a heartless social climber.

Anjelica Huston and Raúl Juliá remain divinely perfect as a couple so besotted they can barely look at each other without bursting into a steamy tango, or an avalanche of flirtatious foreign language banter. Juliá rips into the dialogue with a flamboyant gusto, and he’s a perfect foil for Huston’s supercool, arch one-liners. Sonnenfeld never lets the introduction of a baby affect their comic darkness in any way, which is a perfect set-up for comedy.

Addams Family Values is terrific good fun and always keeps you laughing. It’s a load better than the original, and has some terrific comic set-pieces in. Sure it’s got a pretty basic plot, but it’s directed with a wicked dryness by Barry Sonnenfeld and its cast are now completely comfortable in their eccentric characters. The tone always seems spot-on between the surrealist darkness and the childish, cartooney horror. It’s a very entertaining film.
Email ThisBlogThis!Share to TwitterShare to FacebookShare to Pinterest
Labels: 1993, Anjelica Huston, Barry Sonnenfeld, Carol Kane, Christina Ricci, Christine Baranski, Christopher Lloyd, Comedy, David Krumholtz, Joan Cusack, Peter MacNicol, Raúl Juliá