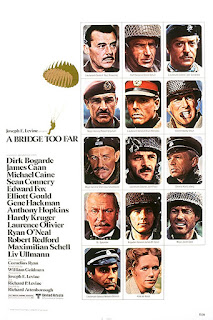 You’ve got to love a good war film. In fact, there are few things more cinematic than the old-school, star laden Hollywood war film. A Bridge Too Far is for me one of the finest examples of this genre, and it’s a film I come back to time and time again. Is it perfect? No of course it isn’t – in fact I probably love this film more than some of the people actually in it do. But it’s a damn fine piece of big-screen, big-budget film-making, and it’s got a cast of stars. And more than perhaps any other film of this genre, it’s a film about how overwhelmingly awful and gut-wrenching war is. This is a film about a defeat – and not the sort of triumphant defeat that Dunkirk feels like. It’s just a gut-punch. The Allies threw the dice big time, and they lost.

It’s quite something to make a war film about possibly the biggest military disaster on the Western Front during the Second World War. The entire plan is a misconceived tactical blunder, and the film never shies away from this, demonstrating time and again the numerous errors that led to it: from Generals ignoring reconnaissance that suggests this won’t be a cake walk, to paratroopers failing to seize bridges quickly, to tanks crawling down crowded roads, fighting every step of the way. Alongside all this, the film never loses track of the horrifying impact of war on both soldiers and civilians caught in the crossfire. It’s a huge budget, all-action, anti-war film. 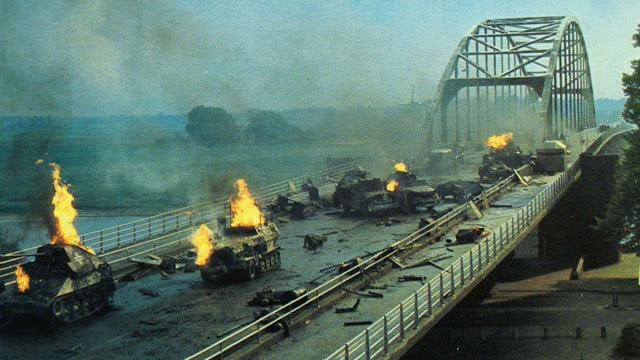 Richard Attenborough is the perfect marshal for this film. He has the experience and understanding of scope to handle the action scenes. At the time, this film was possibly the most expensive film ever made. Not only that, it was independently funded – producer Joseph E. Levine thought the film was so important he pumped millions of pounds of his own money into it. The attention to detail is extraordinary – the film consulted nearly every single surviving commander from the battle on the script – and all the stops were pulled out creating the military features of the film.

This is of course particularly striking now as we know everything in the film is real – no special effects in those days. If you see it in the film, then you know that it was really there. In the sequence showing the planes taking off to deliver the paratroopers to their destinations, there were so many planes in the air that Attenborough could literally claim to command the world’s seventh largest air force. Every military blow of the battle is carefully reconstructed. The tactics are carefully explained and followed. Attenborough can shoot compelling action.

But what makes the film so good (for me anyway) is the way the heart-breaking horror of war never gets lost. In all this action, we are always shown the cost. Attenborough will frequently cut back to the after-effects – several times we hear wounded soldiers whimpering on smoke-filled, body-littered battlefields. Many acts of courage (on both sides) by individual soldiers result only in pointless, gut-wrenching deaths. Arnhem isn’t just damaged by the battle, it’s flattened. The impact on the civilian population is terrible – in a powerful sequence, we see characters we were introduced to earlier mercilessly caught in the crossfire of the German tanks. We return continually to locations increasingly shredded by weapons fire. More and more soldiers are wounded – some horrifically.  Near the end, the remaining British paratroopers, encircled and surrendering, sing a deeply moving quiet rendition of Abide With Me. No one could come out of this wanting to go to war.

Attenborough’s humanity is key to the film’s success. It helps as well that he is a brilliant actor’s director. Want to dispel any doubt on the horrors of Arnhem –then train the camera on the Laurence Olivier’s tear-stained face as he drives through the destroyed streets. Want to understand the sacrifices and the courage? Well just let Anthony Hopkins – simply excellent as the commander of the only forces to reach the bridge at Arnhem – with calm, restrained Britishness request support and supplies late in the film as his men are butchered around him. It’s a film full of brilliant moments of acting like that, where Attenborough points the camera at them and lets them act. 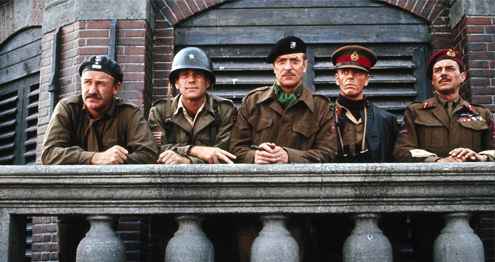 The sequences around Arnhem and the British paratroopers there are the heart of the film. Sean Connery is terrific as Major General Roy Urquhart, commander of the British paratroopers. His growing frustration as events spiral far out of his control is a great contrast with his initial professional confidence. Gene Hackman, as commander of the Polish forces (slightly odd casting but good once you tune up to it), gets the role of the “one man talking sense” who can smell disaster early on, but works harder than anyone to get the plan to work. A number of the regular soldiers in Arnhem are faces the film returns to again and again – giving us people to relate to as their numbers are increasingly decimated by the savage, desperate combat. John Addison’s score also helps a huge amount with building the emotion in these scenes.

The Arnhem sequences are so good that the other sequences around the American paratroopers feel like they come from a slightly different movie. It doesn’t help that the likes of Elliot Gould are playing slightly clichéd “Brooklyn Yankee” types, chomping cigars and ribbing the stiff-upper-lip Brits. Ryan O’Neal as General Gavin is slightly dull. The XXX Corp material is a little dry (essentially driving up a road or waiting), although Edward Fox is superb (and BAFTA-winning) as their charismatic commander Lt Gen Brian Horrocks. Attenborough puts together at least one terrific set-piece tank battle on the road – but it’s not quite enough.

The two biggest American stars are also given the feel-good, up-beat material. James Caan gets the best part in what is effectively a stand-alone story of a Staff Sergeant going to impossible lengths to save the life of his Captain (Caan had his choice of part and chose well). Robert Redford is a little too starry (bizarrely in a film full of stars!) as a Major tasked to seize the vital bridge at Nijmagen via a daylight river-crossing. This sequence feels like it’s been put in the film to (a) give us something to cheer and (b) to allow an American victory for the box office. Of course, we need the biggest star in the world at the time to play the most straight-forward heroic part!

On the other hand, the film ends up laying most of the “blame” on Dirk Bogarde’s Lt Gen Browning. Browning’s widow, Daphne du Maurier, threatened to sue the film-makers for the portrayal of Browning here (she got an apology). Browning is portrayed as the ultimate “non-boat rocker” – over-confident and arrogant, he disregards intelligence suggesting the Arnhem plan is dangerous, seems shocked and clueless once the scale of the disaster is revealed, and by the end of the film seems to be most interested in positioning himself as always opposed to the plan in the first place. Bogarde (the only actor in the film who actually served in Market Garden) was similarly angry when he saw the film – and he has a point. It’s grossly unfair.

It’s a problem with this film and it does annoy me. The parts not set in Arnhem are not as memorable or compelling as the rest. But huge chunks of the film are brilliant, and never fail to move or (sometimes) excite me. Its anti-war stance is striking. The acting from the cast is very good across the board – say what you like, cast every part with a star and you never get confused about who is who. Attenborough also draws great performances from the non-stars – Stephen Moore is a particular stand-out as a signals man unwilling to voice his doubts about the equipment (and who pays a heavy price).

I can watch A Bridge Too Far at any time. I always love it. It’s a film of great moments and performances. It carries real emotional weight. Attenborough is a very good director of actors, but also a skilled commander of scale. It’s a film that gets emotion in there. It’s a film that isn’t afraid to present a military disaster. It doesn’t demonise the Germans. Sure it plays goodies and baddies with the Allies, and parts of it to drag on a bit too much or deal with cliché. But at its best is the core of a great film. I love it. It’s a favourite. And always will be.
Email ThisBlogThis!Share to TwitterShare to FacebookShare to Pinterest
Labels: Anthony Hopkins, Dirk Bogarde, Edward Fox, Elliott Gould, Gene Hackman, James Caan, Laurence Olivier, Maximilian Schell, Michael Caine, Richard Attenborough, Robert Redford, Sean Connery, World War Two