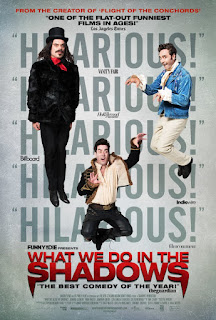 The life of a vampire – in between all the blood, what do you actually do? How do you fill the (never ending) time of immortality? Or, more mundanely, how do you find friends to live with? Jermaine Clement and Taika Watiti’s excellent flat-share comedy is a free-wheeling but very sweet vampire and buddy-movie comedy, set in a vampire flat share. It’s Being Human with more jokes, and more heart.

Opening their doors to a fly-on-the-wall mockumentary crew (whom they have taken a solemn vow not to eat), we enter the lives of four vampire friends who live in Wellington. Viagro (Taika Waititi) is a 379-year old dandy: prissy, with a hatred of clutter. Vladislav is a 862-year old former Vlad-the-Impaler style tyrant, still not completely over torturing people in the basement (though definitely ashamed of this vice). Deacon (Jonathan Brugh) is a youthful 183, the baby of the group, a self-absorbed rock-n-roll Byronite type. Petyr is 8,000 years old, and is a Nosferatu-style monster who never comes out of the basement. Their lives are turned upside down when Deacon accidentally turns boorish Nick (Cori Gonzalez-Macuer) – though this also introduces them to Stu (Stu Rutherford), a genial and immensely likeable chap whom they all take a shine to.

What We Do in the Shadows is a very funny spoof of nearly every vampire cliché you can imagine. Each vampire takes on the style and characteristics of a different sub-school of vampire dramas. It rolls along with a genial looseness, creating heart-warmingly endearing characters – despite the fact that the film doesn’t stint on watching our heroes brutally spill blood and guts as they eat various guests. Of course things like this are juxtaposed with brilliant belly laughs – something about vampires bickering about the washing up and the cleaning rota is just inherently hilarious. Watching them dress up for a night out (unable to see their own reflections) is a gem sequence.

The film shows each of its characters are frozen in time, sort of man-children, stuck in their own time periods and totally adrift in the modern world. It’s part of what makes them endearing. Throw in a couple of sweet plotlines, most notably Viagro’s romantic longing for the woman he moved to New Zealand for almost 60 years ago (and who now resides in a care home), and you’ve got a winner. The group’s interaction with Stu is wonderfully sweet – despite their initial irritance with (and hunger for) the ruddy-faced human in their midst, they quickly all bond with his straightforward calmness and his understanding of everything from the internet to working the TV.

It’s packed with plenty of hilariously inventive gags around vampire-lore. Our heroes spend every night prowling nightclubs – hampered by the fact that before they can enter anywhere, they need to be invited in (we see several snapshots of them attempting to get invitations from impassive bouncers). In confrontations they hiss and fly at each other in a way that’s just this side of silly. Viagro constantly bemoans the mess his housemates make when they eat their victims, without clearing up (he futilely attempts to get them to put towels down to protect the sofa). But there are also endearing spins – the vampires crowd around the computer to watch a youtube video of a rising sun, something they’ve obviously not seen for centuries.

The later introduction of a rival werewolf pack adds further comedy opportunities, with the werewolves headed up by an uptight control freak who enforces rules on everything from physical conduct to the use of foul language. It’s just one of many expert beats in a superb comedy.

What We Do in the Shadows is acted with such lightness and openness, it’s very easy to not notice that it’s brilliantly handled. In the hands of other groups of comedians, this could have been smug, self-satisfied and more about the actors amusing themselves than the audience. Instead this is a gleeful series of scenes, the movie like a big hilarious party we’ve been invited to join. As well as being sharply written and directed, the acting is fantastic.