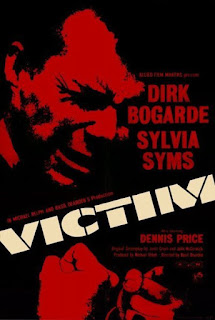 Victim is both a film of its time and hugely daring. It was released in 1961, six years before homosexuality was decriminalised. It feels slightly old-fashioned and coy in its language and style – but at the time would have been almost unbelievably daring. It not only presented gay people as normal people (and not limp-wristed comic figures) but sensitively and sympathetically argues that the law (or “blackmailer’s charter” as the Chief Inspector calls it) was morally wrong.

Melville Farr (Dirk Bogarde) is a married lawyer, about to be offered the position of Queen’s Counsel. One day he rebuffs the entreaties of a young man named Barrett (Peter McEnery). The man later hangs himself in police custody, the victim of blackmail. Farr held deep feelings for Barrett – but cut himself off from contact, having been haunted by his consciously suppressed homosexual feelings. Heartbroken and angered by Barrett’s death, Farr decides to take on the blackmailers – even if it means destroying his career and endangering his marriage to Laura (Sylvia Sims).

In 1961 Dirk Bogarde was one of the most popular actors in the country, a romantic leading man, best known for a series of light British comedies. He was also a gay man, who lived for decades with his manager and partner Anthony Forwood. It’s almost impossible to understand today how brave it was, how much of his career he put on the line, to play Farr. At a time when many people (including characters in this film) considered the very idea of homosexuality a revolting aberration, for Bogarde to play this role could have been career suicide. When even today Hollywood actors are afraid to come out for fear of damaging their careers, here in 1961 was an actor who was actually gay, playing a gay lawyer, at a time when that part of his life was a crime.

What’s particularly impressive about Bogarde’s performance is its calmness, its control. Farr rarely raises his voice, and never hectors us or the characters about the morality of the law. Only once does he show real rage – punching another man after a comment too far about a university “friend” who committed suicide. Bogarde’s Farr is a man, who (the movie implies) has constantly denied that part of himself (much to his pain and of those closest to him). His decision to take a stand is as much accepting a part of himself, as it is doing the right thing.

It’s the scenes with his wife where Bogarde excels. These are deeply, searingly painful scenes of a man struggling to express to his wife his own feelings. Farr makes it clear he ended contact with Barrett because he desired him, because he loved him – more (or rather in a different way) than he loves his wife. Bogarde allegedly wrote his own lines for this key scene, effectively Farr’s coming out. It’s a powerful scene of a man letting a burden fall from his shoulders, of finally saying something he could barely admit to himself.

The relationship with his wife is one of the central points of interest in the film, the story developing in a way that feels natural and unforced. Sylvia Sims is equally good as a woman who is sympathetic, but can’t completely comprehend the depth of Farr’s feelings. There’s no condemnation or recrimination – but there is a low-key feeling of something being broken, of the two of them realising that they have companionship and a platonic love – but not the passion that marriage should have. It’s a testament to the un-showy realism of the film, that it avoids outbursts and fury in these scenes in favour of a quietly powerful, mutually supportive uncertainty.

The rest of the film treads a fine line between polemic and procedural. It’s a well-written, heartfelt piece that wears its research lightly. It’s crazy to think this is first film to actually use the word “homosexual”. The characters are a neat snapshot of the personalities of the time. Some of the straight characters are violently opposed to the “degenerates”. Others, such as the lead Inspector, enforce the law because they must. The homosexual characters are similarly wide-ranging: some are dignified, many are deeply scared, some have a patrician smugness and arrogance (it’s telling Farr gets more angry at these than anyone else in the movie).

There are wonderful opportunities for a host of character actors. Charles Lloyd-Pack (as barber Henry) in particular suddenly unleashes a heartfelt, achingly sad speech of defiance in which he says he has been to prison twice for what he is, and will not go again. Norman Bird’s bookshop owner Harold is a mix of guilt, frustrated feeling and fear – a man deeply confused by his feelings. Nigel Stock is also marvellous as a car dealer terrified of losing out on an inheritance from his father-in-law should the truth be known.

I also loved Noel Howlett’s quiet dignity as Farr’s assistant – and his matter-of-fact statement (after learning the truth) that he has never doubted Farr’s integrity and sees no reason to do so now has a brilliant stiff-upper lip emotion to it. The film contrasts this subtly with Alan MacNaughton’s thinly veiled disgust as Farr’s brother-in-law when he learns the truth.

The film wraps its careful research into the issues of the homosexuality laws – and the dangers of blackmail they expose people to – within an engaging whodunit mystery, set in a very real-feeling London of the sixties. The film has a wonderful eye and ear for the social life of the time, and it throws enough red-herrings and police detective tropes in there to keep the film entertaining. Despite its constant references back to the laws of the time, and the criticisms it makes, it never feels like a polemic – it’s first and foremost a human story.

Yes it is a little dated – very much of its time, and it’s shot with a careful conservatism by Basil Dearden, though he has an expert control of pace and there is no doubting his passionate commitment to this film and its subject matter. That's what you need to remembe: how daringly, unbelievably controversial this film would have been to make. All the major players put their careers on the line here: and it pays off. It would be six years before the revolting laws were repealed, and this happened for many, many reasons – but this film was a genuine help for making people see the wrongheadedness of these laws.
Email ThisBlogThis!Share to TwitterShare to FacebookShare to Pinterest
Labels: 1961, Anthony Nicholls, Basil Dearden, British Films, Dennis Price, Dirk Bogarde, Nigel Stock, Peter McEnery, Social issues, Sylvia Sims