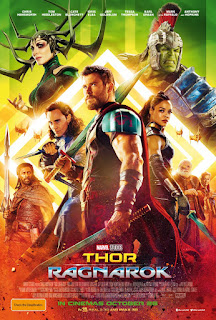 The Marvel franchise is now on to 17 films. That’s 17 films all in the same universe, with at least three more to come in the next year or so. The weight of franchise backstory has started to feel overbearing, with so many other films to tie into and characters to set up that the individual film itself is left with barely any identity or purpose. How refreshing then to have a film that cuts loose and takes a slightly different tone: a genuine action comedy. Thor: Ragnarok is so tonally different from the other Thor films (let alone the other films in the series) it actually manages to feel like its own beast – it’s as close to a director-led vision as the franchise has got.

Thor (Chris Hemsworth) has been all over the universe, working to stop Ragnarok (the prophesised end of Asgard). Returning to Asgard, he unmasks his troublesome step-brother Loki (Tom Hiddleston) who has been disguised as Odin (Anthony Hopkins). Travelling to Earth to rescue their dying father, they arrive in time to see his death. Unfortunately, this releases their elder sister Hela, Goddess of Death (Cate Blanchett). While Hela ruthlessly conquers Asgard, Thor is trapped on the planet Sakaar and forced to enter a deadly gladiatorial contest – against his Avenger ally the Hulk (Mark Ruffalo) – all while trying to escape back to Asgard to stop Hela.

Thor: Ragnarok has a plot that ambles at points rather than sprints. But this hardly matters, as its main focus is on entertaining the audience. Waititi creates a sort of punk 1980s wildness, mixed with a fun-loving wit. The result is a film with action, and high stakes – but never takes itself too seriously. It perfectly understands how to puncture grandeur or pomposity of the Asgardian gods with a neat one-liner or a bit of everyday conversational inanity (a lot of the latter comes from Waititi himself, hilariously playing chilled out rock gladiator Korg). Waititi also allows Hemsworth to let rip with his comic timing rip in a way he’s scarcely been allowed to do since Branagh’s original. It drops the faux-Shakespearean seriousness of Thor: The Dark World, and Hemsworth repositions the character in a more relaxed and charming style. From his opening introduction, undercutting the monologing of a fire demon with a dry series of puns while dangling from a ceiling in chains, he finds a neat balance between seriousness and charisma. Waititi is also (like Branagh) not afraid to let Asgard’s mightiest warrior be the butt of a few sight gags – one laugh out loud moment involving a very strong window is a stand out. Hemsworth demonstrates here he’s a far more accomplished comedian (physically and verbally) than he gets credit for.

This more relaxed Thor is perfect for the rock-and-roll feel of the film. Expertly scored (there is particularly fine use of Led Zeppelin’s Immigrant Song) it has a groovy, 1980s feel. The planet Sakaar is a primary-coloured, odd-alien filled, campy explosion of energy and vibrant punky fun. Said planet is run by the Grandmaster, played by Jeff Goldblum at his most Jeff Goldblumiest ever – if you can picture that you’ve got the tone of the whole planet. This neon lit style is reminiscent of everything from Flash Gordon to The Last Starfighter.

The film’s loose comic style also allows a series of fun match-ups, from Thor and Loki (a wonderfully weaselly, fun Tom Hiddleston – still one of the best things in this whole franchise), to Thor and Strange (a lovely cameo from Cumberbatch), Thor and Valkyrie (a neat mixture of drunken self-loathing and female Thor-ness from Tessa Thompson) and lastly Thor and Hulk. The latter provides a lot of the film’s comic gold, the Hulk finally turned into some sort of character with achildish vulnerability and swagger (though the film still finds time for a Hulk penis gag). Waititi also throws in some nice call-backs to previous films – the bunch here set themselves up as the Revengers, while there are multiple references to the mantra used to calm the Hulk in Avengers: Age of Ultron – without making it feel in-jokey.

There is so much fun in the film, you almost forget the main plot of the film is fairly heavy-going, end-of-the-world stuff. For a Marvel film there is a large body count of recurring characters (at least four bite the bullet here), while Hela’s plot encompasses mass slaughter and destruction. Scenes with Hela are kept short (structurally the film effectively strands her on Asgard to contain her invincibility), so it’s just as well the part is played with such charismatic dryness and imperious arrogance by Cate Blanchett (easily the best Marvel villain since Loki). She’s ably backed up by Karl Urban, adding a lot of complexity to reluctant cowardly turncoat Skurge. Waititi shoots Hela’s rampage of destruction with an exciting dynamism – it’s an action scene that feels different, no mean feat in a franchise that has had so many fights. 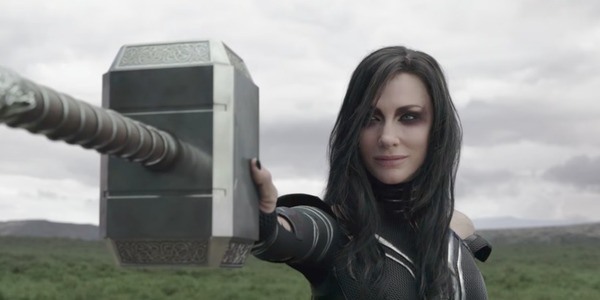 In fact most of the action feels very fresh, the fights never out-stay their welcome, and there are some brilliant visual flourishes – the final battle in particular throws in some almost painterly images as Thor and his allies take on Hela’s zombie army. The arena fight between Hulk and Thor is about a million times more interesting than the dull Hulkbuster battle between Iron Man and Hulk in the past Avengers film as Watiti keeps the focus on character rather than pummelling. The film also manages to keep the stakes high – there are always innocent people our heroes fight to protect.

Thor: Ragnarok might well be the most entertaining, fun film Marvel has produced. It’s almost certainly the best Thor film. While The Dark World failed dismally to build on the mixture of earnestness and comedy in Branagh’s original, this one feels like a natural progression of the first, amping everything up into a vibrant, 1980s styled cocktail of action and fun. It’s terrifically entertaining, well paced, anchored in characters we care about, and it just wants to entertain the viewer. You’d have to be pretty cold for it not to succeed.
Email ThisBlogThis!Share to TwitterShare to FacebookShare to Pinterest
Labels: 2017, Anthony Hopkins, Benedict Cumberbatch, Cate Blanchett, Chris Hemsworth, Comic books, Idris Elba, Jeff Goldblum, Karl Urban, Mark Ruffalo, Marvel Franchise, Taika Waititi, Tessa Thompson, Tom Hiddleston