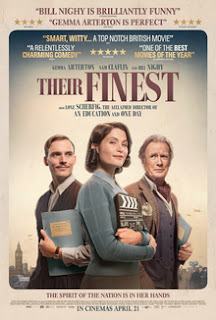 During World War Two, Catrin Cole (Gemma Arterton) is hired by the Ministry of Information to write dialogue for propaganda films – to be specific “the slop” (the women’s dialogue). She pitches the semi-true story of two young women who take a boat to Dunkirk to rescue soldiers, and is hired to work with Tom Buckley (Sam Claflin) to write a screenplay. Among the cast of this film is Ambrose Hillaird (Bill Nighy), an ageing matinee idol having trouble accepting his days of playing young heroes are behind him. Together they overcome initial difficulties to create a film that moves the nation.

Their Finest is a gently amiable piece of film-making, totally predictable but still rather entertaining for all that. You won’t exactly be gripped or compelled by it, but you certainly won’t feel cheated out of your time watching it. It doesn’t have much in the way of originality about it – and you can see most of its jokes and events coming a mile off – but it’s still got a certain charm and warmth about it. And it’s crammed full of some very fun “film-within-a-film” scenes, both seeing the film the team create and the work (and backstage politics) that go into making it. There are also some neat gags (and wry comments) about the casual sexism of the day – and the film (without dwelling on the issue) makes a number of heartwarming moments out of its lead character succeeding against the odds on her own merits.

It also has a couple of fine performances, not least from an engaging and bright Gemma Arterton, who brings a great deal of quiet depth and dignity to Catrin. Catrin has a sweet lack of self-confidence about her – a gentle doubt, that she must learn to overcome over the film. She makes an affecting and empathetic lead. It also helps that she has a great screwball comedy chemistry with Sam Claflin. Claflin’s part is far more conventional – the gruff man with the heart of gold – but he nails the part’s humanity and its comic grumpiness.

The film’s main weapon of entertainment is Bill Nighy, in a part almost certainly written for him so well does it match his strengths. Hilliard is just the sort of vain, pompous, arrogant preener that Nighy can play in his sleep – a man who needs to be flattered and praised into doing anything, who assumes when he first reads the script he’s being offered the role of the young hero not the drunk uncle. What Nighy does so well with parts like this, though, is bring them depth and pathos. Hilliard may be an egotist, but he’s gently comforting in tragedy and has a profound sadness and insecurity behind him about where his career and life is going. So, while he brings a lot of the film’s comedy, he’s also a large part of its heart, elements that emerge increasingly as the film progresses.

The sequences that follow the making of the film are very funny. Jack Lacy is wonderfully sweet and genuine as an actual war-hero, an American serving in the RAF, parachuted in by the Ministry of War to send a propaganda message to the USA. Lacy’s Carl is well-meaning and loves films (not least his hero worship of Hilliard) but a hopeless actor, who can’t help smiling at the camera after every line. It’s a neat indication of the film’s well-judged tone that he is never a butt: the crew work hard to improve him, he’s eager to learn, he’s completely lovely – and when a character does complain about the extra work he is causing, Henry Goodman’s Alexander Korda-ish producer simply states “he has done things none of us would be brave enough to do”.

Because there is a harder realism about this film. It doesn’t shy away from the dangers and brutality of war – there are bombings and people die. Some deaths are characters we know, others are on the edges of the story. “I’m a bit emotional today. My landlady was killed last night” one character states. Each of our lead characters encounters a dead body, or knows someone who has been killed. There is a genuine danger of obliteration or invasion just on the edges of the comedy. It’s a neat balance that the film keeps, between pathos and light comedy.

The film-within-a-film, The Nancy Starling, is a brilliant pastiche of 1940s British war films, instantly recognisable and affectionately amusing. But it’s also, when we finally see parts of the film, rather moving. It has a real emotional force to it - the film-makers achieve the difficult balance of giving us a pastiche we can chuckle at it, but also a pastiche that feels like it would genuinely move the people watching it in the film. 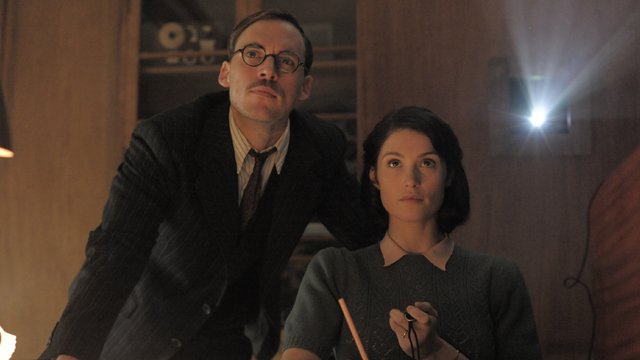 Their Finest’s main problem might be that partly because it’s so quietly unassuming and gentle, it is almost completely bogged down in predictability. Most of the character arcs can be seen coming a pile off – my wife and I were able to practically write the scenes ourselves as they happened. There is very little original here. Even the stories of actors’ pretensions and film-making disasters have a breezy air of familiarity about them – the sort of stuff we’ve seen in films about film-making hundreds of times before. In fact, what’s striking is that a film so predictable and familiar remains entertaining and endearing – which is surely some sort of testament to the acting and direction.

Their Finest is perfect for what it is: an entertaining, weekend-afternoon film that will pop a gentle smile on your face. There is nothing particularly deep or memorable about it beyond that. It has some fine performances, some good jokes and it will make you laugh. But will you remember much about it within a few hours? Probably not. Is it a film that you can imagine revisiting to discover new gems in it? Again probably not. Is it a film that will entertain you on a Sunday afternoon? Absolutely.
Email ThisBlogThis!Share to TwitterShare to FacebookShare to Pinterest
Labels: 2016, Bill Nighy, British Films, Eddie Marsan, Films about film, Gemma Arterton, Helen McCrory, Jack Huston, Jack Lacy, Jeremy Irons, Lone Scherfig, Paul Ritter, Richard E. Grant, Sam Claflin, World War Two