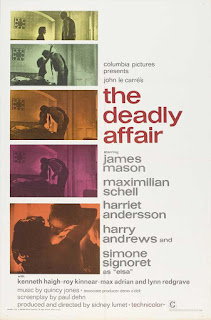 The Deadly Affair is a faithful adaptation of John Le Carré’s first novel, Call for the Dead, that first introduced to both Le Carré’s distinctive vision of espionage (a world where spying is a dirty, depressing business, miles away from Bond), and also his principal recurring hero George Smiley – although Smiley here is renamed Charles Dobbs (Paramount held the rights to several recurring Le Carré characters as it was making The Spy Who Came in From the Cold). The Deadly Affair often gets forgotten in the list of Le Carré films, which is unfair – this is a fine, gripping, character-led thriller.

Charles Dobbs (James Mason), a senior case officer in British intelligence, meets with Samuel Fennan (Robert Flemyng): a civil servant in the Ministry of Defence, who has been anonymously accused of being a Russian agent. Dobbs all but agrees to clear Fennan in a friendly meeting – only for Fennan to go home and commit suicide. Dobbs investigates, but quickly finds that the facts – and the story of Fennan’s wife Elsa (Simone Signoret) – don’t seem to tie up. Working with retired police inspector Mendel (Harry Andrews), Dobbs investigates further – against the wishes of his superiors. This also helps to distract Dobbs from his disastrous home life with his serially unfaithful wife Ann (Harriet Andersson) and her growing closeness to his old war friend Dieter Frey (Maximilian Schell).

The Deadly Affair has an old-school, unflashy, Hollywood professionalism to it, very smoothly directed by Sidney Lumet. Lumet and photographer Frederick A. Young slightly exposed each shot of the film to give the colours a drained, murky quality, which works extraordinarily well for the grimy Le Carré feeling. Lumet uses a series of careful POV and shot-reverse-shots to involve the audience neatly in the action – we are nearly always seeing events from someone’s perspective, and this helps us empathise with the characters and action. He also uses London locations expertly – everywhere is carefully chosen and shot for maximum impact, creating a world of dingy backstreets that perfectly matches the feeling of the story. 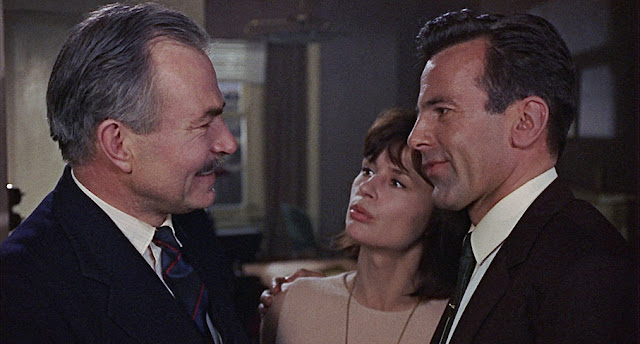 It also helps that Lumet changes very little from what was already an excellent source novel. It’s an intricate “whodunnit” puzzle, twisty and challenging enough to keep the audience guessing. What the film does really well is introduce Dobbs’ wife Ann as a central character in the storyline, and to make marital betrayal and deception a complementary subplot, alongside Dobbs’ involvement in the world of professional bluff and counter-bluff: during the day he practises the very same deception that pains him so much at home. (Le Carré would effectively lift some of the ideas of this film adaptation and reproduce them in later books, most especially Tinker, Tailor, Solider, Spy.)

This marital disharmony becomes a key theme in the movie – two people who are totally reliant on each other but can’t seem to stop hurting each other. Ann is in many ways the hellish wife – serially unfaithful and largely unrepentant – but Dobbs is equally difficult, unnervingly patient and silently (but never vocally or perhaps even consciously) judgemental. They have a complex arrangement, but also a clear understanding of each other, and their conversations sound like careful, familiar routines. Like a scab, Dobbs keeps picking at this wound of his wife’s infidelity – early in the film he returns home after a late call out to find his wife naked in bed. She rises to greet him provocatively, and they kiss, but Dobbs seemingly can’t let go of his own sense of impotence. Later Ann demands Dobbs expresses some rage and jealousy – as if looking for him to show some sort of feeling.

It’s a neat sub-plot for a film that focuses on a series of major personal and professional betrayals – I counted no fewer than five over the course of the film but there are probably more depending on how you define it – and which shows how spying can become wrapped up in personal affairs. Despite Dobbs’ apparent pride at treating his work with a determined coolness, everything is so very personal in this film. Characters react often with emotions rather than cool rational thinking – with the exception of one character who uses the emotions of others very rationally to manipulate them. Even the final confrontation of the film has a sad loss of emotional control at the centre of it – and leads to actions bitterly regretted by the survivors. 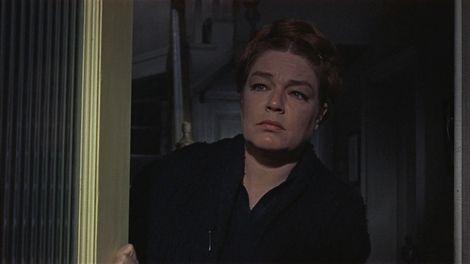 James Mason is very good as Dobbs, buttoned-up but slightly run-down, a man who presents a face of calm control and wisdom to the world, but at home is an insecure, deeply pained, impotent mess. Determined and principled in the world of espionage, he is hopelessly in love with his wife, to the extent of practically allowing her free rein to do as she wishes. Despite being in nearly every scene, it’s also a very generous performance, quiet and unshowy, that often cedes the scene to his partners. Harriet Andersson (though clearly dubbed) manages to make Ann someone who feels sympathetic and understandable – even though she is a colossal pain. 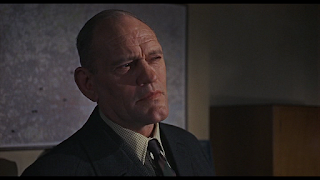 Lumet also gets some wonderful performances from the rest of the cast, not least from Harry Andrews who I think steals the movie as a narcoleptic Inspector Mendel, obsessed with facts and possessed of a dry professionalism. The film also gives a gift of a role to Simeone Signoret, a woman with a troubled past and indeterminate motives, bubbling with guilt and resentment. She is given no less than three tour-de-force scenes (one played almost in complete silence) and plays each brilliantly. There are neat cameos as well from Max Adrian (as a campy popinjay running Dobbs’ department) and Lynn Redgrave as an eager stagehand for an amateur theatre company with some vital evidence.

The film’s conclusion revolves around two masterfully done sequences: one during a performance of Edward II (by the real Royal Shakespeare Company – spot several familiar actors on stage), the second an emotional confrontation at a dock that erupts into violence. It’s a wonderful dwelling on betrayal and its impacts. It also works an absolute treat as a low-key counterpart to Bond at his Swinging Sixties height, while still packing a jazzy score from Quincy Jones (which at first seems completely incongruous but actually helps to establish the mood really well). Directed with professional assurance with a host of fine performances – it’s a little bit of an overlooked gem.
Email ThisBlogThis!Share to TwitterShare to FacebookShare to Pinterest
Labels: 1966, Harriet Andersson, Harry Andrews, James Mason, John Le Carre, Kenneth Haigh, Literary adaptations, Lynn Redgrave, Max Adrian, Maximilian Schell, Roy Kinnear, Sidney Lumet, Simeone Signoret, Spy thrillers