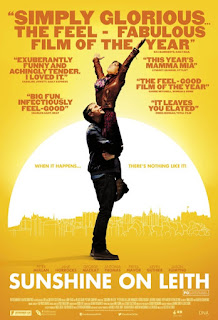 Sunshine on Leith is a jukebox musical that really works, because its story feels natural, its characters are engaging and the songs don’t feel too shoehorned in (even if, of course, we have a character called Jean to allow Oh Jean to be sung, and another moving to Florida which will of course require a Letter from America). It’s a really good reminder of how many really toe-tappingly, hummable, great songs The Proclaimers came up with. It’s not a masterpiece of course – but as a piece of solid, competent, crowd-pleasing cinema it’s hard to beat.

The plot follows two soldiers returning from Afghanistan. Davy (George MacKay) is keen to start a new life, Ally (Kevin Guthrie) wants to marry Davy’s nurse sister Liz (Freya Mavor). Davy founds himself drawn to Liz’s colleague Yvonne (Antonia Thomas), while Liz struggles to reconcile her love for Ally with her desire to spread her wings and see more of the world. Meanwhile Davy and Liz’s father Rab (Peter Mullan) discovers, on the eve of his 25th wedding anniversary to Jean (Jane Horrocks), that a brief affair in his early marriage led to the birth of a daughter (Sara Vickers) he never knew he had. Love and family problems play out to a string of Proclaimers hits.

Sweeping camera-work from Dexter Fletcher helps to create a romantic, vibrant image of Edinburgh – you’ll want to book your tickets as soon as the film ends, this is such a good advert for the city – and he draws some wonderful performances from the cast, all of whom I suspect had the time of their lives making this film. How lovely is it to see Peter Mullan moving away from gruff hardmen, to play a man as sensitive and humane as Rab – and also to hear him croon with feeling some top songs? He makes a superb partnership with Jane Horrocks, who not surprisingly is the most accomplished singer, and who channels her natural bubbly mumsiness into a genuinely moving portrayal of a wife dealing with completely unexpected betrayal.

The film keeps the humanity of its characters very much at the centre, never over-complicating the plot or overloading us with extraneous detail or drama. The quietly tense opening sequence of Davy and Ally on tour in Afghanistan (with a rendition of Sky Takes the Soul) swiftly helps us invest in their safety – and sets us up to really feel their release once they return to the safety of civilian life. Nothing hugely unexpected happens in the film at all – it can be pretty accurately predicted from the start – but the whole thing is told with genuine warmth and feeling.

There are some stand-out musical sequences. Over and Done With, told as a pub story-telling session, works really well – it’s wonderful up-beat, vibrant sequence. Jason Flemyng has a great dance cameo during a fun-filled number set in the Scottish National Gallery (Should Have Been Loved). Davy and Ally dance thrillingly down the street to I’m On My Way as they celebrate their discharge. The final number – it’s not a surprise – sees what seems like most of Edinburgh corralled into a massive rendition of a song about walking a very long distance…

George MacKay demonstrates he’s a pretty decent song and dance man – and he also has the every-day ordinariness that makes him a perfect audience surrogate. His chemistry with Antonia Thomas is also fantastic. As the secondary couple, Freya Mavor is headturningly watchable as Liz, while Kevin Guthrie gives a nice air of bemused immaturity to Ally.

Sunshine on Leith is a brilliant crowd-pleaser, and has clearly been made with love and affection for the material and the songs, which seeps off the screen. It’s a perfect advert for everything in it. I would say that I am not sure Fletcher is the perfect film director – he’s afraid to let the camera stand still for too long in the larger dance set-pieces, which means we lose the impact of some of these numbers (or the chance to really appreciate the choreography). But he totally gets the tone of the film, and delivers that in spades.