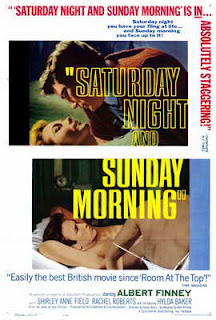 Whatever people say I am, that’s what I’m not because they don’t know a bloody thing about me! … What I’m out for is a good time – all the rest is propaganda. – Arthur Seaton

The 1960s saw a cultural shift in British cinema. Prior to this, most British films were either Ealing-style comedies or dramas focused on the middle or upper classes. When the working classes did appear, they were usually scamps or “ever so ‘umble”. This all changed in the 1960s with the emergence of “kitchen sink” dramas. The New Wave of British Cinema had arrived – films that looked at the real lives and issues of the working classes, that dared to present the working man (and it generally was men) as a living, breathing human being (warts and all) rather than some sort of latter-day Shakespearean comic turn.

Arthur Seaton (Albert Finney) is a skilled, well-paid worker in a bicycle factory in Nottingham. He’s also your quintessential “angry young man”, contemptuous of his fellow workers, adamantly opposed to being told what to do with his life and only interested in a hedonistic life where he does whatever he wants. As Arthur begins a relationship with aspirant young woman Doreen (Shirley Anne Field), his life is complicated by the wife of a fellow worker, Brenda (Rachel Roberts), whom he’s sleeping with, announcing she’s pregnant.

Saturday Night and Sunday Morning caused such a sensation when it was released. But it’s such a strong capturing of a particular time and moment that it’s hard to look at it today without seeing it as a little bit dated, or finding it hard to work out what all the fuss was about. But Arthur Seaton seemed to capture the mood of generation – and that’s a credit to Alan Sillitoe’s excellent (semi-autobiographical) script, based on his own novel.

Albert Finney gives the part a forceful, primal aggression that seems to capture the spirit of the age. He constantly bubbles with ill-directed resentment, mixed with cynicism and a beery oafishness. He isn’t a “faux” intellectual, like a Jimmy Porter, or a man striving to move up the greasy pole. He’s a chippy, arrogant, slightly lazy man with no interest in self-improvement. He’s also a horrendously selfish character, interested only in his own pleasure – I think it goes without saying his treatment of women doesn’t stand up well. Tied of being preached at about the sacrifices of the war generation (who surround him in the factory), he merely wants to do what he wants, when he wants. Despite his flaws, he seemed to capture the feelings of a post-war generation.

The film was also unique for the themes it addressed. It was pretty much unheard-of for a film to even mention the possibility of abortion. It tackled issues of adultery and pre-marital sex (it’s one of the first films to show a man and woman waking up in the morning in bed together). Its lead character drinks, swears (as much as allowed by the censors) and even takes pot shots at neighbours he doesn’t like with an air gun. All of this of course seems rather tame now – but at the time, it was radical to see someone like this, behaving like this, on screen.

The plot, such as it is, is as aimless in many ways as Arthur himself. Not a lot happens in the film, apart from Arthur constantly pushing to not “let the bastards grind you down”. Of course all the pain in the story actually comes from Arthur’s own actions, not least to Brenda, his occasional mistress. Rachael Roberts is sensational as Brenda – the finest performance in the film – a slightly faded former glamour girl, now older, lonely and whose appeal to Arthur (and his appeal to her) seems as much maternal as it does sexual. Brenda’s a tragic figure, clinging to a fantasy of a life free from her dull husband – but slowly (and sadly) learning that she is looking for something from Arthur he can never give her.

By contrast, Arthur’s other conquest, Doreen, is a far more assured, determined and ambitious woman, closer to his own age. Shirley Anne Field is playful and charming, but in her own way as much besotted with Arthur’s rootless masculinity as Brenda. Unlike Brenda though, she is a determined to get what she wants. Arthur and she eventually seem set to settle down for domesticity on a new-build council estate, a decision Arthur seems to resign himself to (he flings a stone impotently at the new houses, but barely seems to understand why). Even this relationship reinforces Arthur’s emptiness – his aimless rebellion lands him eventually in the very conventional lifestyle he spent the rest of the film pushing back against.

Karel Reisz shoots all this with a documentary realism. Freddie Francis’ brilliant photography gives a new wave, neo-realist romance to the Nottingham streets that reinforces the feeling that we are watching a real slice of life. Of course, today much of this revelatory impact of this is lost – we’ve seen these sort of dramas too many times. Arthur’s rebellion is so ill focused – and his attitudes bordering so heavily on the misogynistic – that it’s a lot harder to sympathise with him today than it would have been back then. However, it captures a moment of history, and a feeling many young people at the time had – that the world they were presented with just didn’t match up with what they wanted from life. A dated classic, but still an important piece of film making.
Email ThisBlogThis!Share to TwitterShare to FacebookShare to Pinterest
Labels: 1960, Albert Finney, British Films, Karel Reisz, Kitchen sink drama, Rachel Roberts, Shirley Anne Field