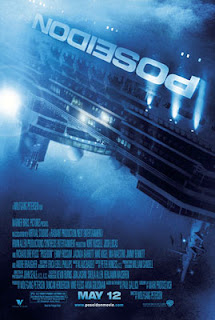 In the 1970s the big tent-pole movies were all disaster films. They were the superhero films of their day. They also followed a very clear formula: big stars, big man-made structures, big crashing natural forces sweeping away man’s pride. Lots of death and tear jerking, with sub-plots for each character that could have been pulled out of an episode of EastEnders.

Poseidon is a remake of sorts of The Poseidon Adventure – but with plot and characters changed (not for the better). There is a ship called the Poseidon. It’s hit by a tsunami. It gets overturned, trapping the survivors at the top (now the bottom) of the ship. While most wait to be rescued, our heroes decide to climb down (now up) the ship to the hull to escape. Of course, not all of them will make it!

You notice I didn’t mention any characters there. That’s because what this film laughably calls its characters are so crudely drawn, they barely qualify as human beings, let alone characters. They exist purely to get into trouble. We spend only the most rudimentary time getting to know them before they (and their loosely defined characteristics) start dropping like flies. This is an anti-actor film – literally anyone off the street could play these parts, so disinterested is the film in them.

So we’ve got Kurt Russell as an over-protective father and Emmy Rossum as his semi-rebellious daughter. Will they grow closer together over the film? You betcha. Will Russell learn to accept the place his daughter’s boyfriend has in her life? Of course. Will “I work better alone” professional gambler Josh Lucas learn that he needs other people. Nope. Just kidding of course he does. Will suicidal architect Richard Dreyfuss discover a new love of life? See where I’m going?

In fact it’s so completely predictable you can take a pretty good guess who will make it and who won’t based solely on the opening few minutes. Some of its decisions lack any form of sensitivity. Any character from a remotely racial minority? Let’s just say that their chances are not good (Dreyfuss needs to actually kick Rodriguez’s waiter down a shaft so he doesn’t drag the others down – I thought at first “there’ll be consequences to that” – but nope it’s never mentioned again). Anyway, all the surviving characters are loaded white guys. One of them does need to make “the ultimate sacrifice” to save the others but, again, their identity can be pretty much worked out in the opening minutes. The most unpleasant character in the film? Yup he dies.

In fact you watch the film and feel sorry for the actors. Not only are the characters wafer-thin, but they spend so much time silently underwater or getting soaked, they look like they are suffering a lot for nothing. The focus is entirely on the mechanical progression from set-piece to set-piece, all of which stink of familiarity. So we get the long swim under water (of course someone gets trapped!), the impassable ravine that needs crossing (of course someone is stuck on the other side), the claustrophobic tunnel (of course one of the characters has claustrophobia). There is even a bit where the terminally stupid fucking kid wanders off and needs to be rescued. Is there anything new in this? It’s a re-tread of every disaster film ever.

Wolfgang Peterson directs all this with a professional detachment and disinterest that makes you want to cry that he once made Das Boot. If there is one thing he knows, it’s shooting confined spaces (see not only Das Boot but also Air Force One) and he makes the onslaught of water look pretty good. But this is such a piece of hack work, you despair that he clearly felt he needed the money. The special effects are pretty good I guess (although the CGI ship looks totally dated), but it’s a staid, dead, predictable film.

It only really works in an “it passed the time watching it in two chunks over a couple of breakfasts” way. Because there is literally nothing new, interesting, unique, intelligent, imaginative, dynamic or individual about it, it passes in front of your eyes like a bland wall-paper. Compared to the classic disaster films of the 1970s it’s not fit to lace their explosions. Totally empty, unchallenging rubbish.
Email ThisBlogThis!Share to TwitterShare to FacebookShare to Pinterest
Labels: 2006, Andre Braugher, Disaster Films, Emmy Rossum, Jacinda Barrett, Josh Lucas, Kurt Russell, Mia Maestro, Mike Vogel, Remakes, Richard Dreyfuss, Wolfgang Peterson