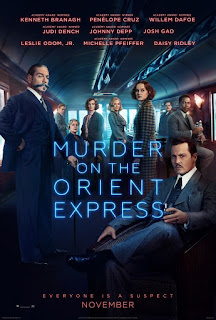 Is there a murder mystery with a more widely known resolution than Murder on the Orient Express? Possibly not – if for no other reason that film and television versions of this story are as numerous as the suspects in the actual mystery. If that wasn’t a big enough challenge for Branagh to take on, he also joins a list of umpteen actors to play Poirot himself: following in the (very precise) footsteps of the big guns: Finney, Ustinov and of course, above all, David Suchet. How does his version of this most famous detective in his most famous adventure measure up? Well, with mixed results.

For those who don’t know, Hercule Poirot (Kenneth Branagh) is “possibly the world’s greatest detective”. Here, he is travelling back from Istanbul  on the Orient Express, a berth having being secured at the last minute by his friend Bouc (Tom Bateman) the director of the line. En route he is approached by the sinister Ratchett (Johnny Depp), who asks if he can serve as his bodyguard. Poirot refuses – only for Ratchett to be murdered that night. Bouc asks Poirot to investigate – and it soon becomes clear that the dozen other passengers in Ratchett’s carriage could all have had motives to kill him. But who is the killer?

Murder on the Orient Express is on the cusp of being a very good film. But, like the train itself, it gets bogged down too often in changes from the source material that add nothing, action scenes that feel toe-curlingly out of place, and bombastic filming that goes a little bit too far. In many ways it captures some of the faults of its director, my much-loved hero Kenneth Branagh – and I do love him, but as a director he has a tendency to make things too big, to wear his love of the complex shot on his sleeve; to basically try too hard. As a director, that’s what it feels like he’s doing here.

It’s filmed with a luscious, chocolate box, old-school Hollywood grandeur. The camera swoops and zooms over some gorgeous landscape as the train puffs through snowy mountain scenery. There are some loving travelogue tracking shots of Istanbul and Jerusalem. The film lingers with a loving eye on the luxury and class of the Orient Express itself (including some egregiously clunky product placement). The costumes look lovely.  But the end result of all this lavish filming is that it sometimes goes too far towards the reassuring, Boxing-Day-afternoon treat.

Everything is a little too technicolour at points. It also means that some of Branagh’s more self-consciously tricksy camera work stands out a little too much. A “birds-eye” view of the discovery of the body (the camera above the heads of the actors looking straight down) is oddly disconnecting – it works a lot better when Poirot and Bouc examine the crime scene, giving the audience a god like view of the scene. Some overly complicated shots swoop up along the aqueduct where the train is stuck, past Poirot speaking to characters, then over the top of the train. It’s a rather too overblown and clumsy attempt to make a conversation seem cinematic – it feels a little forced.

It’s one of many points where the film feels like it is trying too hard to make the story edgier or more overtly cinematic. Not the least of these are sequences that up the action quotient. I feel very confident this is the first Poirot film you’ll ever see where the hero is involved in not one but two dynamic fights. One of these is a bizarre chase down the aqueduct with Poirot and another character. The second involves gunfire (an effective shock to be fair) and Poirot using his cane as a weapon in hand-to-hand combat.

There is nothing wrong with making Poirot more active – Branagh’s character is very much the ex-soldier and policeman, busting open the door to Ratchett’s berth to investigate, walking over the train’s roof, brow-beating the odd suspect (at one point at gun point). It’s just all too much – what audience is this playing to? Who really goes to a Poirot film expecting a goddamn fight scene? Even Count Andrenyi is introduced ninja-kickboxing photographers (I’m not joking here) – is this really what Agatha Christie would have wanted?

There are some odd choices made to deepen Poirot’s character. He is given some sort of lost romantic interest – no less than four times in the film he is given scenes where he holds a photo and bemoans “mon cher Kat-a-rean”. In the opening sequence, Poirot’s love of symmetry is introduced by him accidentally stepping in a cow pat and then stepping in it with his other foot to make each equal. Not only does a “stepping in shit” joke seem wildly out of place, but I don’t believe someone as fastidious and observant as Poirot would even step in it in the first place, let alone choose to step into it twice.

The train doesn’t just stop, it’s nearly taken out by an avalanche. A knife isn’t just discovered, it’s literally found stabbed into a character’s back. Characters have been changed to allow a more diverse cast – which I applaud – but making Arbuthnot a soldier turned doctor is a change that makes very little sense. The claustrophobia of the original is lost by having workers turn up almost immediately to dig the train out. Several scenes are filmed outside, with workers surrounding the train digging it out. Some of these undermine the original or are a little silly.

But I’m being really hard on this film because there are major flashes of promise here. Not least in Branagh’s performance as Poirot. I’m very confident in saying that, after David Suchet of course, this is the second best Poirot committed to film. The first thing anyone will notice is of course the moustache. Yes it looks absurd, but you attune to it quickly. It’s also a plot point: Poirot uses it, and his eccentricities, to lure people (Columbo style) into a false sense of security. When the film relaxes into just letting Poirot investigate (and hues closer to the original), Branagh gives Poirot a warm humanity and gentleness. His eyes are a wonder – intense disks of sadness.

Branagh gives Poirot a love of order and justice that defines his world view – and the film introduces a moral conundrum for Poirot in the solution of the crime. I would say David Suchet’s TV version did this better – stressing Poirot’s Catholicism and belief in the rule of law as major factors that conflict him when confronted with the solution. But Branagh captures a real sense of Poirot’s conflict (even if the solution reveal is overplayed and overshot – right down to a “last supper” style tableaux in a railway tunnel) and his sadness, confusion and decency are really lovely - there is even a very neat touch with him forgetting to straight and smarten his appearance, as he deals with the ramifications of his solution to the murder. He looks like cartoon character, but he makes Poirot a real man. I would definitely like to see him do the role again. 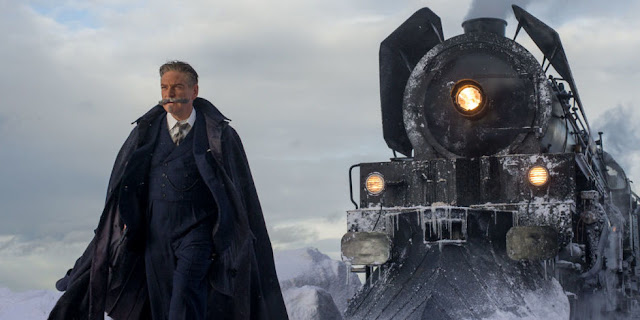 The rest of the all-star cast rather struggle for crumbs, as the focus remains solidly on Poirot (largely because the film is intended as the possible first in a series). Tom Bateman is excellent as Bouc, charming and endearing but also given a character arc that sees him develop and change. Of the stars, Depp is suitably grimy as Ratchett, Pfeiffer imperiously stylish and skittish as Hubbard and Odum Jnr affecting as Arbuthnot. I was very taken with Daisy Ridley’s Mary Debenham, a young charm hiding steel underneath. Dafoe, Dench, Colman, Jacobi and the rest are given little to do but are reliably excellent when they are. Others like Cruz feel wasted.

When the film focuses on Poirot simply investigating, it is very good. Each interrogation of the passengers is brilliantly played by Branagh – Poirot subtly adjusting his methods and approach depending on the person he is talking to. Poirot’s introduction sequence in Jerusalem has a playful Sherlock feel to it: Poirot solving a crime in seconds (having been dragged from his hotel, where he pickily demands eggs that are perfectly equal), including accurately predicting how the criminal will try and escape. There are lots of lovely moments – but just when you settle down to enjoy it, something wildly over-the-top or silly happens.

Murder on the Orient Express is by no stretch of the imagination a bad movie. In some places, it’s charming and a lot of fun. If it’s designed for watching on a bank holiday afternoon it works very well. But it’s, at best, the third best version of this story on film (after the 1974 Lumet film and the Suchet TV version). Do we really need to watch the third best version of an already familiar story? If we could transplant Branagh’s performance into Lumet’s film, now that would be something. But as it is, we’ve got a decent if flawed film that just tries too hard to do too much.
Email ThisBlogThis!Share to TwitterShare to FacebookShare to Pinterest
Labels: 2017, Crime drama, Daisy Ridley, Derek Jacobi, Johnny Depp, Josh Gad, Judi Dench, Kenneth Branagh, Leslie Odom Jnr, Michelle Pfeiffer, Murder mystery, Olivia Colman, Penélope Cruz, Tom Bateman, Willem Dafoe