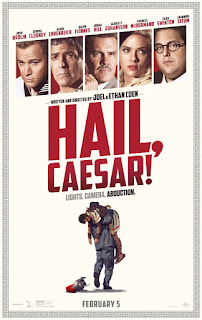 The Coen brothers’ CV is a bit of a strange thing. It’s one part thriller, one part engagingly brilliant comedy – and then there are a collection of screwball-style entertainments, off-the-wall lightweight comedies (usually about dummies or sharp-talking professionals), as if every so often they needed a palate cleanser. Hail Caesar! falls very much into that final camp.

Eddie Mannix (Josh Brolin) is a studio manager and fixer in 1950s Hollywood, whose job is to keep the stars in line and the films running smoothly. The latest fly-in-his-ointment is the kidnapping of Baird Whitlock (George Clooney), the star of the studio’s prestigious sword-and-sandals-and-Christianity epic Hail Caesar!. Mannix has to settle the ransom demand, while struggling to keep the news quiet – and manage the production of several other problems including a secretly pregnant Hollywood sweetheart (Scarlett Johansson) and a cowboy-turned-actor (Alden Ehrenreich) struggling with his latest movie requiring him to speak and act rather than just sing and ride a horse.

Hail Caesar! is a mixed bag. There are some wonderful comic sketches in here, the sort of brilliant highlights you could quite happily watch again and again. The problem is these sketches are part of a narrative framework that never really catches fire, that can’t seem to decide how much it is a surrealist comedy and how much it is a genuine Hollywood “behind-the-scenes” slice of life. So I found I delighted in the sketches, and the hilarious reconstructions of some of the studio fodder of the 1950s – while drifting through the general plot of the movie. The laughs are very tightly focused on the stand-alone sketches, and rarely develop from the plot of the movie itself.

Those sketches, though, are brilliant – and the Coens have secured what are effectively a series of stand-out cameos to deliver them. The highlight is certainly a hilarious sequence featuring Ralph Fiennes as a superior English director and Alden Ehrenreich as a cowboy-turned-actor crammed into a period drama in order to “change his image”. It’s a brilliant idea, that revolves around Fiennes’ barely concealed frustration Ehrenreich’s awkwardness in front of the camera, eagerness to please and most of all his accent which so badly affects his elocution that he simply cannot pronounce the line “Would that it were so simple”. The sequence is brilliantly funny – take a look at it down here. In fact it’s so good, it might be too good. Nothing else in the film really touches it.

There are some other good sketches in here as well. Most of them revolve around the loving recreation of Hollywood movies. The movie-within-the-movie Hail Caesar! is a perfect recreation of the Quo Vadis style of movies: large sets, hilariously over-blown dialogue, heavy-handed Christian messages (“Squint at the grandeur!” Clooney’s character is directed in one reaction shot to The Christ – as the filmmakers persist in calling him) and gaudy colour and sets. Clooney himself does a pitch perfect parody of the style and delivery of Robert Taylor.

We also get some spot-on parodies of Hollywood musical styles of the time. Scarlett Johansson plays a Esther Williams-style actress who stars in a series of swimming pool musicals (a bizarre fad of the time). Fiennes is directing a creakingly glacial Broadway-adaptation. Channing Tatum plays an actor in a Minnelli style musical. The tap-dancing sequence we see being filmed is, by the way, another brilliant sketch – a toe-tapping parody song, which also showcases Tatum’s grace and style as a dancer. It’s such a good parody that it actually sort of crosses over into being a genuinely enjoyable slice of song and dance.

I also struggled, as I tend to sometimes, with the artificiality of the Coens’ comedy – there is always an air of them (and their actors) wanting the audience to know that they are far smarter than the dummies in the film. I get this feeling a lot from Clooney in particular – while his film-within-a-film sequences are brilliant, it feels like he never feels much affection for the character outside these sequences. He wants us to know that Clooney is not as dumb or vain as Whitlock is. It’s this lack of empathy that doesn’t quite make the performance work. Empathy is why Eldenreich is the stand-out performer of the film. He plays Hobie Doyle with a real affection and warmth – he makes the character feel like a sweet and genuine person. While Hobie is always a comic spoof, he also feels like he could be a real person – making him so much easier to relate to for the audience.

Hail Caesar! is a film that works in fits and starts, not all the way through. Josh Brolin is fine as Mannix, and his fast-talking, plate juggling, problem solving throws up some funny lines – but his story never really engages the audience as much as it should, and the Catholic guilt Mannix balances in his life never really becomes clear. The Coens are reaching for some point about art and faith - of how film makers may tell themselves they are making something for art, when they actually work for faceless businessmen interested only in making money – but it never really brings this art vs. money argument into place. Does a picture have worth if we talk about worth enough? It's a question we may as well ask about Hail Caesar itself.

Because the parodies and sketches of old Hollywood movies are so brilliantly done, whenever we drift away from them to the actual plot you find yourself losing interest. It’s a film that actually works better as a few sketches extracted from YouTube – I could happily watch Fiennes and Eldenreich’s scene, or Tatum’s dance sequence, or Clooney’s Taylor spoof in isolation – I don’t really feel the need to watch the entire movie again.
Email ThisBlogThis!Share to TwitterShare to FacebookShare to Pinterest
Labels: 2016, Alden Ehrenreich, Channing Tatum, Films about film, Frances McDormand, George Clooney, Hollywood satire, Joel and Ethan Coen, Jonah Hill, Josh Brolin, Ralph Fiennes, Scarlett Johansson, Tilda Swinton