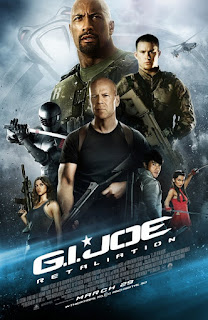 Back in 2009, Hasbro (flushed with success from its Transformers franchise) released GI Joe: a humble, straightforward nonsense actioner (almost exactly the sort of film spoofed by Team America) in which gung-ho American action heroes save the world, destroying major cities on the way. It was harmless, Stephen Sommers-directed fun. Critics hated it. Audiences saw it, but were basically meh. It left us on a cliff-hanger. The cliff-hanger led to this joyless, “by-contractual-obligation” reboot.

The villainous Zartan (Arnold Vosloo) has changed his entire DNA to make him an exact physical match for the President of the United States (Jonathan Pryce) and taken his place. Using his powers, he orders a surprise attack on the GI Joe force, wiping out their base. All the Joes, including Duke (Channing Tatum) are killed, except for Roadblock (Dwayne Johnson), Lady Jaye (Adrianne Palicki) and Flint (DJ Controne). Now they need to form a team to take revenge, defeat Zartan and prevent the plans of the newly escaped Cobra Commander.

Oh dear God this is an awful film: a truly dire comic book disaster, terribly written and practically incoherent in its plot and storyline, peopled from top to bottom with bored looking actors. It’s barely a sequel at all to the original film. In fact, it disregards most of the plot of GI Joe: Rise of Cobra altogether, barely acknowledging its existence. None of the plot threads of the first film are carried across at all, with the exception of the replacement of the President. On top of that, all the characters the first film spent time establishing as our heroes are unceremoniously dispatched (mostly off-screen) to be replaced with a trio of new heroes, none of whom make any real impact. Is it just me who feels cheated that all the characters the first film tried to build up just get wiped out like so many wasps when a pest controller comes calling?

Was it really necessary to totally dump the previous film? It wasn’t that bad. And if they were going to do that, could they not have come up with a fresher reboot than this? Who on earth thought the way to make the series fresher was to introduce Bruce Willis (at his most breezily, contemptuously disengaged) as a new hero? The film barely has time to introduce its new heroes: Lady Jaye has Daddy issues and is looking for approval (her Daddy, by the way, sounds like a sexist asshole with his “women shouldn’t serve in the military” attitudes and I was waiting for another character to point this out – they don’t of course), while Flint barely has a character beyond being a cheeky-chappie. When even Dwayne Johnson can barely be bothered to bring his C-game to a role, you know you’re in trouble: this film turns the most engaging action star of our age into a dull rent-a-muscle.

Then the plot. Yawn. Oh dear God yawn. Is there a plot? Not really. Events happen. They keep happening. Occasionally characters (like the “Blind Master”) pop up to essentially blurt out a load of plot, in between rushed character introductions. Turgid fight scenes are given extended screentime – but since they usually involve people we don’t really know fighting people we’ve barely been introduced to, it’s pretty hard to get engaged in them. Nothing really links together or carries any meaning. In fact, the film is about so little – and what plot there is, so clumsily and irritatingly spoonfed to the audience while our heroes take a frustratingly long time to catch-up – that you’ll be surprised the run time is as long as it is. I’ve already forgotten most of it and I watched it two days ago.

I say watched it, because I’m not sure “letting it pass before my eyes” on a Saturday morning over breakfast really counts. Certainly the final battle scenes – involving the storming of a bunker, something blowing up in space, world leaders in peril, and embarrassingly trite “personal rivalry” stories coming to a head – are so unimaginatively filmed, so dully predictable in their execution, that I fast forwarded through them. I just wanted the fucking thing to end. In fact I bemoaned the failure of Cobra to knock off all the Joes to start with. Not that the villains are much better themselves.

Pity poor Channing Tatum. Actually on reflection don’t: he’s well out of it. Tatum and Johnson’s double bill is the most likeable thing in the movie, the only thing that feels remotely real. Tatum was called back for reshoots (as he became more famous in between finishing filming and the planned release date, after the success of Magic Mike) and it’s a neat reminder of what an engaging, off-the-cuff performer he can be: when he kicks the bucket, the film’s most likeable, interesting character goes with it. The other actors just seem interested in picking up a cheque.

GI Joe: Retaliation isn’t a reboot. It’s an execution. It’s not even an execution you can get worked up about. In fact, I would have happily knocked off some of its characters myself. Did we create the language of cinema to come up with something as stodgy and insipid as this? Where is the magic and inspiration, where is the fun? What looking glass did we fall through, that anyone thought this pile of crapparoo was the way to restart a franchise?
Email ThisBlogThis!Share to TwitterShare to FacebookShare to Pinterest
Labels: 2013, Action Films, Adrianne Palicki, Arnold Vosloo, Bruce Willis, Byung-hun Lee, Channing Tatum, Comic books, Dwayne Johnson, John M Chu, Jonathan Pryce, Ray Stevenson, Terrible Films, Walton Goggins