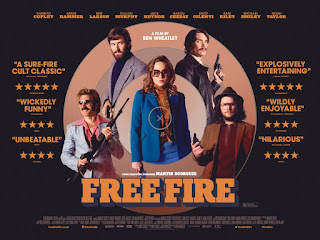 At some unspecified point in the late 1970s, IRA men Chris (Cillian Murphy) and Frank (Michael Smiley) meet with Vernon (Sharlto Copley), via an intermediary Justine (Brie Larsen), to buy a lot of guns in an abandoned New York warehouse. Unfortunately, Frank’s druggy brother-in-law Stevo (Sam Riley) the night before was badly beaten by one of Vernon’s men Harry (Jack Reynor), after Stevo had maimed Harry’s cousin. Next thing anyone knows, guns are drawn and the shooting starts…

And that shooting lasts for the course of the rest of the film. Free Fire is like some sort of slightly odd concept album. As if Wheatley and co-screenwriter Amy Jump sat down and wondered “can we make a gunfight that basically lasts the entire course of a film”? The answer was, as it turns out, yes they could. Was it actually a good idea? Well that’s less clear.

The good stuff first. The film looks terrific, and is very well shot. The mix of beige and slightly over-saturated colours capture a hilariously flashy look at the 1970s. Soundtrack choices are very well made. The sound design – surely the main focus of any film focused on gunfights – is excellent, with bullets sounding like they are ricocheting past your ear. It’s cut with intelligence and clarity – it’s always immediately clear where you are and where everyone else is (Wheatley even patiently films our characters entering the warehouse through a series of doors – and old trick but it immediately gives us the geography).

The screenplay is also pretty funny in places, and does a good job of sketching out characters incredibly quickly. It’s lucky it also has a fine cast of actors to inhabit these swiftly drawn characters. Best in show is probably Armie Hammer as a suave, cock-sure hired gun who clearly believes the whole shebang is a little beneath him. Cillian Murphy as the nominal lead makes an engaging double act with Michael Smiley. Sharlto Copley adds maverick, overblown colour as a cocky weapons dealer. Brie Larson plays the long game as the intermediary whose loyalties seem a little unclear. Sam Riley is engrossingly pathetic as the whining loser whose actions lead to the whole disaster.

The gun fight itself is a neat combination of the realistic and the comic book. Our heroes are hilariously inaccurate with their weapons (as you expect most people would be in this situation) but this doesn’t stop every single character getting shot in the arms, legs and other body parts multiple times. Adrenalin means they largely shrug these off for the first half hour of the film, but by the final third each character is unable to walk and visibly struggling with growing shock and loss of blood. I’ll admit it’s rather fun to see a gunfight conducted largely by people crawling around on the floor groaning, in between whining and complaining at each other.

Structurally there isn’t a lot to the film. There is a twist of sorts as both sides are double crossed (the identity of the double crossers should be worked out by most astute watchers) and the film occasionally throws enemies together in odd partnerships and alliances. But the plot is basically a real-life survival film – who is going to get out of this warehouse alive?

Which is what brings us back to this concept album idea. Yes this an entertaining enough film – and it’s very short – but is a single gun fight between characters we’ve only vaguely got to know in the opening 10 minutes really enough to sustain long term interest? Is this something I can imagine re-watching? It’s got some funny lines and some decent moments, but honestly no not really. It’s an inventive idea, like a challenge Wheatley has set himself. But instead of seeing what is clearly a talented director playing with toys and seeing if he can make a film centred solely around an action set-piece, imagine if he turned that creative fuel on making an actual film. We know he can – he’s got some fine material on his resume. So why make this?

Free Fire feels like a conscious attempt at making a cult film, with its 1970s aesthetic, its eclectic cast of characters, its witty moments and punchy action sequences. I’ll agree it’s very different from anything else I’ve seen. Does that necessarily mean that it’s a good film? I’m not sure. It’s a challenge and almost a joke. It’s different from action scenes in Hollywood blockbusters – but at the end of the day, for all the fact that the gun shots have consequence, it’s just an extended action set-piece without context. Very entertaining but kind of empty.
Email ThisBlogThis!Share to TwitterShare to FacebookShare to Pinterest
Labels: 2016, Action Films, Armie Hammer, Babou Ceesay, Ben Wheatley, Brie Larson, Cillian Murphy, Jack Reynor, Michael Smiley, Noah Taylor, Patrick Bergin, Sam Riley, Sharlto Copley