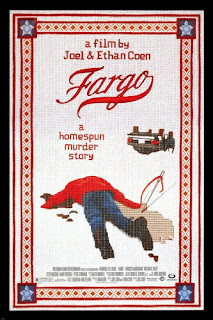 Sometimes you see a film and, for whatever reason, you expected something totally different. It can throw you when something is so different from your expectations. With Fargo I had been led to expect a comedy. A comedy with dark undertones, but a comedy never the less. Fargo is in fact such a blackly, violently, grim piece of work – with lashings of dark comedy – that I was completely turned off by it. Watching it again, understanding the quirky blackness and nihilistic optimism (yes that’s right!) it contains, I appreciated it more and more as the masterpiece it is.

In Minneapolis, Jerry Lundegaard (William H. Macy) is a down-on-his luck car dealer, heavily in debt, who arranges for two small-time criminals (Steve Buscemi and Peter Storemare) from Fargo, North Dakota, to kidnap his wife, splitting the $80,000 ransom (while telling his wealthy father-in-law the ransom is actually $1 million). However, the kidnapping quickly gets bogged down in an escalating cycle of murder and violence, and events quickly spin out-of-control. All this is investigated by heavily-pregnant and relentlessly positive police chief Marge Gunderson (Frances McDormand).

Only the Coens could have made film that is so nihilistic, in which life is so cheap and death so meaningless, but yet at the same time strangely hopeful and life-affirming. Because even after all the horror and casual murder that fills the film, its heart remains the warmth of Marge Gunderson. The film continually returns to the simple affection of her relationship with her husband (a hugely sweet John Carroll Lynch). Even her pregnancy (and their obvious, unshowy delight in it) suggests a hopeful new world, moving away from the horrors of this one. It’s a genuine, emotional heart at the centre of the story, which grounds all the violence and mayhem.

And there is a lot of violence. The film is punctured at several points by brutal and unexpected killings. The body count is extraordinarily high (seven people die during the film, which considering the cast is so small and the running time so tight is pretty darn high). The camera doesn’t shy away from the horrific after-effects of killing – the suddenness, and the cold grimness of the bodies left behind. The killing is often random and pointless, with several bystanders suffering: at one point the camera pans past a parking attendant, in the wrong place at the wrong time, slumped dead on the floor of his booth. And all of this over some money. Well, that and the fact that Peter Storemare’s thug is a psychopath. 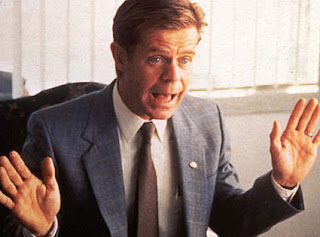 All this disaster of course spins out from the feckless vacancy of William H. Macy’s Jerry Lundergaard, a sad-sack loser and overtly “nice guy” who you feel has been an unimpressive, quietly resentful failure his entire life. Macy has never been better, not only making Jerry empty and desperate but also quietly bitter and frustrated. He’s never actually that sympathetic – there is an un-empathetic shallowness in him. David Thomson described him as “a scoundrel, and in the end amiability is as nothing.” Even when he’s being humiliated, you can’t really warm to him. There are several brilliant sequences where Lundergaard’s anger and resentfulness bubble under his “Minnesota-nice” attitudes – be that facing his over-bearing father across the dining room table, or furiously scraping at his car in the ice.

That “Minnesota-nice” accent and rhythm of speaking, its impeccable good manners, are the source of a lot of the films fun and warmth. Every character around the edges of the drama is sweetly optimistic, scrupulously polite and positive. It’s part of the Coens’ genius to set such a cold and violent drama within the confines of a world which is upbeat and positive. There is a brilliant contrasting comedy to the harshness of the world against the gentle happiness of Minnesota. It’s endlessly endearing and sweet.

The centre of this is Frances McDormand as Marge Gunderson, perhaps one of the quickest and sharpest investigators you’ll see in drama, able to compartmentalise the brutality of crime from the warmth of her home life. McDormand is simply excellent, the beating heart of the movie, despite the fact she doesn’t even appear until it is almost a third of the way in. Her gentle but astute investigation of the crime is marvellously Miss-Marple-like in its sharpness. But she extends the same shrewd and generous understanding of human nature to her personal life: there is a marvellous sequence where, having agreed to meet an old friend from college, she gently lets him down after recognising the lonely divorcee wants something very different from the meeting. That’s not surprising, considering the gentle supportiveness and love in her relationship with her husband gives the film a constant respite of humanity.

Marge may see the world of violence, she may even be able to live in it sometimes, but she doesn’t really understand it. And that’s not surprising because the Coens’ plot here revolves sort of around money, but it’s mostly around mistakes, fuck-ups and confusion. It just so happens that a number of the people involved are dangerous, proud, devoid of conscience or all three. It’s a disaster of epic proportions. But it spins out of no planning, just events going out of control. Jerry’s father in law (played excellently by Harve Presnell, a truly imposing slab of masculinity and the prototype bully) is of course far too controlling and arrogant to not take matters into his own hand by playing hardball with killers. 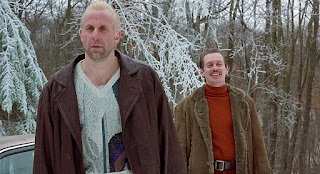 And those killers are both excellent. It’s a perfect role for Buscemi – scuzzy, fast talking, weaselly – with a look of panic behind the eyes. He’s a small-time hood, out of his depth, who makes some terrible mistakes and resorts to killing and violence. He’s a perfect match with Peter Storemare’s softly spoken, chillingly blank killer who goes about “cleaning up” any mess with a ruthless simplicity.

But that’s the thing about this film. It might be full of ruthless people and killers, but it ends with Marge and her husband, together in bed, spending time together. They have a future and it’s one of simple family values and hope. There may be mindless, terrible killing out in the world – senseless violence that goes nowhere and means nothing – but there is still the warmth of family relationships, the charm of simple home values. It’s a nihilistic film where life is cheap – but it leaves you with a warm and happy feeling. 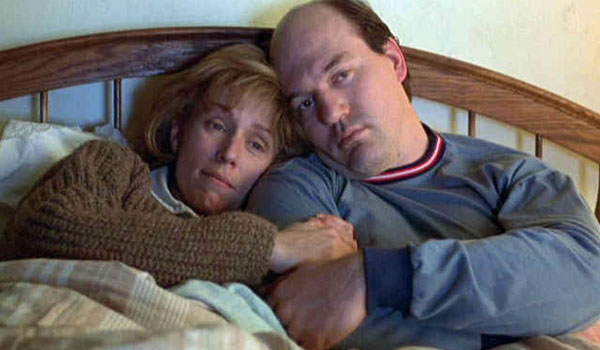 It’s also of course marvellously made – if you had any doubt about the Coens’ mastery of cinema, watch this – it’s superbly edited and brilliantly paced. It’s a perfect length, short, sharp and achingly profound. It’s also marvellously shot by Roger Deakins. I hated Fargo when I first saw it. But re-watching it twice since then, it’s a marvel. A truly unique and deeply wonderful film.
Email ThisBlogThis!Share to TwitterShare to FacebookShare to Pinterest
Labels: 1996, Crime drama, Frances McDormand, Harve Presnell, Joel and Ethan Coen, John Carroll Lynch, Peter Stormare, Steve Buscemi, Thrillers, William H. Macy