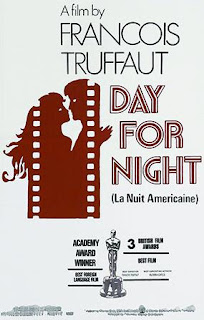 François Truffaut is perhaps the greatest example of a critic turned film maker. A noted French film expert, he made a splash when he turned to film directing and became one of the leading figures of the French New Wave. This movement was seen as a rejection of old-school, literary melodramas of French cinema, instead embracing social issues and using the techniques of cinema in new and imaginative ways. Truffaut later stated though he was not a revolutionary, but a man who wanted to make stories that were important to him, using all the tools of cinema available. And as a man who loved cinema – and worshipped the great directors of yesteryear – what story could be more important to him than the making of films themselves?

Day for Night (the term means to place a filter on the camera in order to shoot scenes set at night, during the day) is set during the production of Meet Pamela, a melodrama starring gentlemanly screen icon Alexandre (Jean-Pierre Aumont), increasingly fragile screen diva Séverine (Valentine Cortese), neurotic young star Alphone (Jean-Pierre Léaud) and British film star Julie Baker (Jacqueline Bisset) recovering from a nervous breakdown. The film is directed by Ferrand (Truffaut himself), working in close collaboration with the crew (many of them played by the real life crew of Day for Night) not least passionate cinephile script-editor Joëlle (Nathalie Baye). The film is plagued by compromise, reshoots and actor-induced difficulties, with Ferrand and his crew constantly forced to rewrite and adjust the story to compensate.

Day for Night is partly a gentle, satirical farce on movie-making (it even has a documentary camera crew, following events around), but really it’s a deeply romantic, wonderfully engaging, desperately sweet homage to cinema and movie making itself. In fact, I can’t imagine anyone who loves movies not loving this film. It’s a charming warts-and-all, behind-the-scenes look at how a movie is made, and what motivates the people who make it. The fact that it’s really funny, and has some wonderfully engaging characters in it, is the icing on the cake. 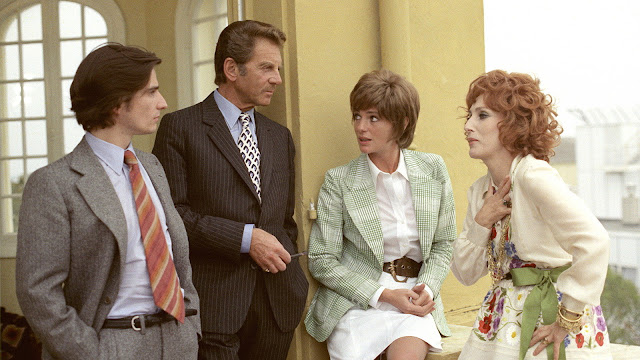 Truffaut places himself at the centre of the film in more ways than one. Obviously he’s playing the director – the still-centre of the film, who constantly must address and overcome a string of practical problems, from actors disappearing to malfunctioning props and (in one stand-out moment) a cat who refuses to lick milk from a saucer. But the film also places Truffaut the man at its heart: Ferrand’s love of cinema is Truffaut’s own. Three times we see Ferrand dreaming at night (it’s possible it’s even the same night – each set-up is the same). We see snippets of the dream before its full content is revealed: it’s a memory of the boy Ferrand (based on Truffaut’s own childhood) going to cinemas at night to steal still photos of Hollywood masterpieces (in this case Citizen Kane). Cinema is such a powerful, all-embracing part of Truffaut’s life that even as a child he had to worship at its alter, and commit theft to take a small part of it home with him.

This love of cinema runs through the whole film. Joëlle (a truly wonderful performance from Nathalie Baye: smart, sweet, engaging and sexy) can imagine leaving a man for a film but never vice-versa. The props man, Bernard, loves the tricksy solution search to overcome filming problems – and clearly carries a yearning to be on screen himself. The film is packed with longing stories of the golden age of Hollywood: at one point Ferrand drives around his set, bemoaning the loss of the era of studio-made films. It’s a film that celebrates the artisans of film, perhaps even more than artists. It’s an insight into what all those little jobs on the credits actually are, and the heroes are frequently carpenters, script editors, assistants, soundmen, extras directors... In fact all the problems of the film are caused by the actors themselves, the self-absorbed public face of an industry that is built on the love and dedication of the working people behind them. 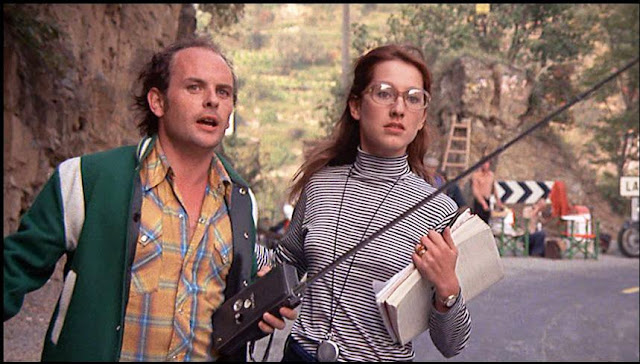 The actors in the film do, however, contribute most of its comedic and romantic elements. Neurotic, needy matinee idol Alphonse (Jean-Pierre Léaud in a neat performance of childish self-obsession), fawns possessively over his girlfriend Liliane, who he treats as part lover, part sister, part surrogate mother. Frequently he disappears or melodramatically announces that he is finished with acting. He contrasts nicely with Alexandre (a gentlemanly and endearing Jean-Pierre Aumont), who goes through the film with a professional calmness, laced with charm, who is never late and never causes any trouble, but enjoys gossip – and quietly lives with a far younger male tennis player.

Jacqueline Bisset (again hugely engaging – it’s hard not to fall in love with the people in this film) perfectly captures both the attractive likeability and vulnerability of the person who lives their whole life in the spotlight, in a thinly veiled portrait of Julie Christie. She has a natural ease with the assistants and crew – but it’s her fragile mental state that has the insurance companies worried. It’s easy to see why she might feel like that, as the film set is a hot bed of flirtation and casual one-night stands – at one point even called out as such by an outraged assistant-director’s wife. What’s “nice” about the affairs though is their relative lack of long-term drama – short term tears and tantrums are swiftly forgotten, as everyone pulls together to make the film.

The drama of film creation is the magic here. The film is bookended by elaborate set-ups for a street scene (the film even playfully doesn’t reveal at first that what we are seeing is a film-within-a-film) – one carefully rehearsed, the other reshot with the set covered in snow to help cover up the reasons for an urgent reshoot. A scene between the father and the daughter-in-law is conceived, written, rehearsed and shot in one sequence – all in response to Ferrand and Joëlle’s perceptions of the dynamics between the actors. Ferrand, behind his quietness, is ruthless in using things for the film – one character finds their heartfelt confessions about the emptiness of life pushed under their door the next day as lines integrated into the script. It’s not cruel – and that’s the best thing about this film, it’s never cruel or bitter – it’s just the way of the game, the way we struggle to create art. 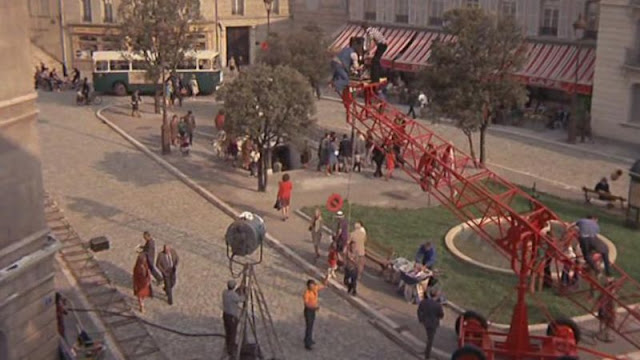 And the struggle is what is clear here. Ferrand bemoans in voiceover that every film starts with him wanting to make the best film he can, but always seems to end as a salvage job. Much time is spent setting up a complex ballroom sequence, which circumstances later require to be cut. Séverine (a winningly bright performance of diva self-parody from Valentina Cortese) frequently struggles with lines and blocking, regularly bringing the film to a halt – at one point her lines are stuck on a wall out of camera shot. It’s another example of the exposure of film magic – at one point a window and part of a wall is built on a scaffolding to give the impression of a building – only what will appear on camera is built, everything else is scaffolding.

Interestingly, the film all this effort and work is being put into looks like a pretty forgettable melodrama. It’s in many ways another piece of comedic self-parody – Truffaut’s Ferrand is filming a thinly veiled version of Truffaut’s own The Soft Skin (I’m indebted to the Criterion Collection blu-ray special features for that titbit) – but it’s also a sign of how art and compromise go hand-in-hand. The final film is hewn from the circumstances of its making: it might not be what was intended at the start, but it’s the best we can do with the marble the artist has been given. Sure Meet Pamela looks pretty average – but the important thing is the love invested in making it. If this goes into an average film, the same level (perhaps more) goes into a great one. 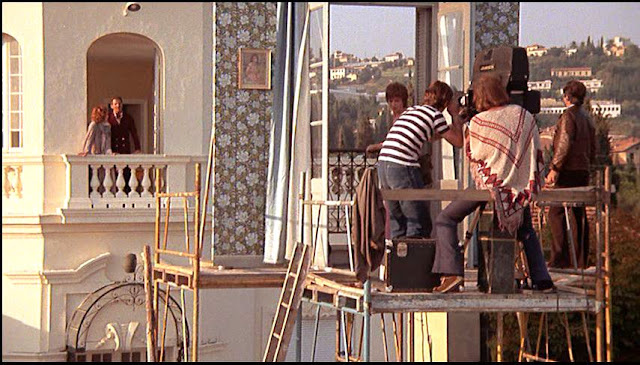