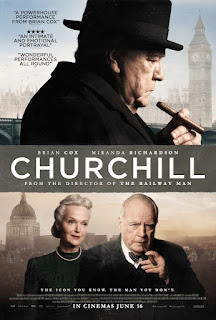 1944. Its three days before D-Day and Winston Churchill (Brian Cox) is getting cold feet. Haunted by memories of Gallipoli, he fears that the attack on Northern France will lead to disaster and oceans of blood. Against the advice of his Generals Montgomery (Julian Wadham) and Brooke (Danny Webb), he attempts to push General Eisenhower (John Slattery) to change the plans. As depression takes its grip on him, only his wife Clementine (Miranda Richardson) can get through to him.

Churchill is a bit of a mess. It’s pretty well acted but highly televisual, shot with a self-conscious flourish that only emphasises its micro-budget. Teplitzky is in love with the cross-fade (or even worse the half fade) – constantly cutting from place to place for brief moments in the middle of scenes, often for lingering shots of actors staring out to sea or walking through fields. The action is often framed oddly, in long shot with full bodies in shot framed between ground and sky. Other scenes are filmed flatly – when Montgomery addresses his army, no amount of slow pans can hide that it consists of about 20 men.

On top of that, every single scene is scored within an inch of its bloody life. Now I love the power of film music, but this goes too far. The score is bland, predictable and unimaginative and just not that interesting to listen to. When it’s dropped heavy-handedly on top of every single scene it makes you want to scream. It’s also often completely misjudged or inappropriate – as gentle romantic piano swells during a key discussion between Churchill and the King, you almost expect them to kiss.

That’s before we get started on the script, which is instantly forgettable. Alex von Tunkleman wrote a long running column in the Guardian on historical accuracy (or not) in films. Talk about a hostage to fortune, when you try to write your own film… I’ll go into historical issues in a bit, but there are lots of little things that feel wrong from Smuts (Deputy PM Of South Africa!) following Churchill around like some sort of valet too Montgomery addressing the Prime Minister to his face as “Churchill”. Stuff that just doesn’t feel quite right. The script also relies on a fictional “young secretary” who eventually speaks truth to the great man and wins his respect. Von Tunkleman is no writer of snappy dialogue, the film too often feeling like a wonky history lesson than a drama.

Historically the film does explore a different side of Churchill – enough to ruffle the feathers of the millions of Churchill fans out there. It focuses on his depression and self-doubt, within the framework of a period when he was starting to become sidelined by America. It also focuses on his little known opposition (certainly initially) to D-Day (he favoured a second front opened in Europe’s “soft underbelly” of Italy) – although it certainly expands this last-minute opposition for dramatic effect. I’m pretty sure he was on board by this point (however initially reluctant)! 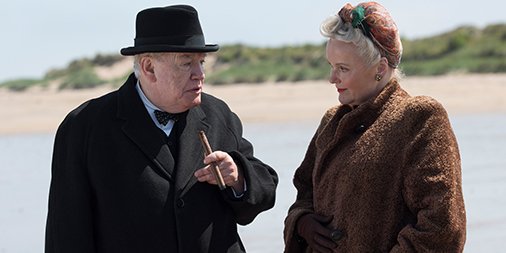 What the film looks like it might do (but never quite does) is really explore some of Churchill’s laws and vulnerabilities – to look at the negatives and see how overcoming (or dealing with these) made him a great man. It touches heavily on Churchill’s depression – the “black dog” – with a desperately worried Churchill retiring to his bed to despair, praying for bad weather to prevent the landing and bawling out his secretary. Churchill is frequently wrong or mistaken, and the film captures much of the frustration his generals had with this talented amateur. It also isn’t afraid to show that, with American muscle driving the war, Churchill was becoming more of a mascot than a major orchestrator of allied strategy.

It’s a shaded portrait, but the film is eventually seduced by Churchill’s magnestism – a King’s Speech style final radio broadcast is all swelling regard, and a coda of Churchill waving his hat on a beach towards France hammers home his legendary status – miles away from its careful look at his growing irrelevance (and his concerns about this) early in the film. For all we have characters constantly stressing to Churchill his time is passing, the film can’t help finishing with a flourish that hammers home his centrality.

Churchill is flat and unimaginative but it does have an energetic, engaging performance from Brian Cox. While not in the first rank of Churchills, he captures the charisma, without slavishly imitating the famous voice. His Churchill, with his depression and doubt, also feels different: a slightly counter-establishment actor like Cox fits nicely with this. It’s an assured, charismatic performance hampered by the material. The rest of the cast feed off scraps though Miranda Richardson is assured as a twinkly level-headed Clementine. Richard Durden also deserves mention as gruffly supportive Smuts, as does James Purefoy as a gentle George VI.

Churchill means well – but fails. It’s aiming to question some of the reverence we have for the past, but ends up falling between stools, in the end too in love with the myth, but too critical to please the die hards. Flatly filmed and woodenly written, too many scenes fade from memory too quickly. Brian Cox (and Winston) deserved better.
Email ThisBlogThis!Share to TwitterShare to FacebookShare to Pinterest
Labels: 2017, Biography, Brian Cox, Ella Purnell, James Purefoy, John Slattery, Jonathan Teplitzky, Miranda Richardson, World War Two