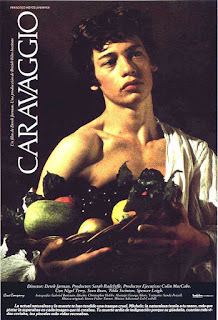 Derek Jarman started his career as a painter, before he began making his own eccentric, art-house films, shot through with a fascination with visual imagery, colliding time periods, abuse of power and homosexuality. For years, Jarman had sought funding to make a biographical film about Caravaggio – one of his (and my) favourite artists. The film he eventually produced, Caravaggio, is quite simply not like anything you’ve really seen before – partly a masterpiece of striking imagery and inventiveness, partly a groaningly semi-pretentious, self-conscious piece of art cinema. What it never is though is dull.

Told in a disjointed series of flashbacks, in which not every scene necessarily connects with the scenes preceding and following it, Caravaggio as a young boy (Dexter Fletcher) is taken under the wing of Cardinal del Monte (an imperiously controlling Michael Gough): creepy part art patron, part pervert. Caravaggio (Nigel Terry) becomes a successful painter, while never losing his taste for the wildness and violence of the streets of Rome. He becomes fascinated by street fighter Ranuccio Thomasoni (Sean Bean) and Thomasoni’s lover Lena (Tilda Swinton), the three of them forming a sensually suggestive menage-a-trois, which eventually leads to tragedy. All this is framed with the dying Caravaggio, remembering in a semi-poetic voiceover feelings and moments from his life. 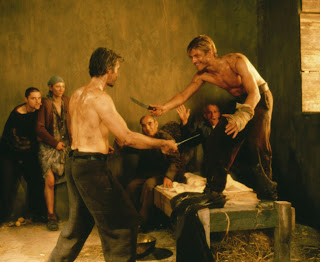 Firstly, for any fan of Caravaggio, this film is a visual treat. Every frame is lit and framed to be as reminiscent as possible of the style of the master. Many scenes are framed either in bare, stone rooms with single windows, or in sets emerging out of an inky blackness. Lighting often strikes diagonally across the frame, just as in Caravaggio’s best work. A number of scenes seem lit from a single source, such as a candle. On top of this, a number of scenes feature either the creation of, or inspiration for, a number of Caravaggio’s most memorable artworks: for those familiar with his work, it’s a delight to see these either recreated in the studio by models, or suggestively composed out of scenes. For an art lover, it’s a visual treat.

Jarman also has an intricate understanding of the creation of art, and when we watch Caravaggio at work it genuinely feels like watching a real artist, engaging with the world, recording images in his mind’s eye, and preparing his next work. The scenes watching Caravaggio create his masterpieces are fascinating in their detail and the careful build-up of paint to create an effect. The effort of models to stay still for the painter is constantly stressed. It’s a tribute to the work that goes into creation, even if the film succumbs to a few pretentious clichés (at one point Caravaggio and Ranuccio fight playfully with knives and Ranuccio cuts Caravaggio: of course Caravaggio smears the blood over Ranucci’s face. That tends to be what artists in films do). 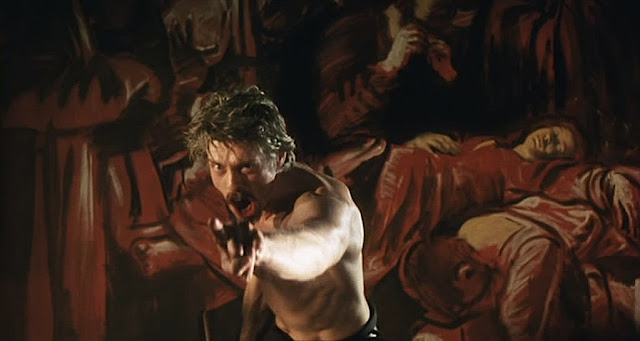 Jarman, however, makes a film that is deeper and more suggestive than that. This is a fascinating meditation on power and patronage in the world of art. Caravaggio is a genius, but also a tool of the people above him in the pecking order. One of the first things we see is the teenage Caravaggio selling first a painting, then his body, to a pervy art collector. The patrons call the shots here, and if they want to put your work on their wall, or their hands down your pants, the artist just needs to fall into line. Caravaggio himself is little different – the models he works with are treated with a certain warmth, but there is a clear hierarchy here. His relationship with Ranuccio and Lena is rooted initially in power – he can effectively buy them or their bodies, because he controls the money available to them. The renaissance was not a time of equality: everyone is in hock to someone else, and everyone is defined by what they can trade, be that their art, their body or both.

The film has a clear sensual charge to it in every frame, despite not containing a single scene of sex. There are highly suggestive moments of sexual abuse and desire throughout. It’s heavily implied Cardinal del Monte’s interest in the young Caravaggio is not completely innocent, as del Monte sits with him in bed teaching him to read. During their first modelling session, Caravaggio tosses a series of coins at Ranuccio, each of which the man inserts suggestively into his mouth. Every scene with Lena tingles with sensuality – either with Caravaggio, Ranuccio or the mysteriously powerful Cardinal Borghese (a corrupt looking Robbie Coltrane).

Perhaps the most striking feature of the film though is its highly unique look. Taking his cue from Caravaggio himself – who painted the subjects of his historical pictures in contemporary dress and locations – Jarman and costume designer Sandy Powell dress the cast in a series of shabby, 1940s-1970s clothing (with the exception of a scene in the Vatican, which is established as a fancy dress party). Caravaggio is barely seen without a cigarette in his mouth, and dresses like a bohemian from Montmartre. Plenty of modern props are introduced – a banker fiddles with a pocket calculator, the writer Baglione hammers his criticisms into a typewriter while flicking through a luscious magazine of Caravaggio prints. Ranuccio cleans a motorbike. 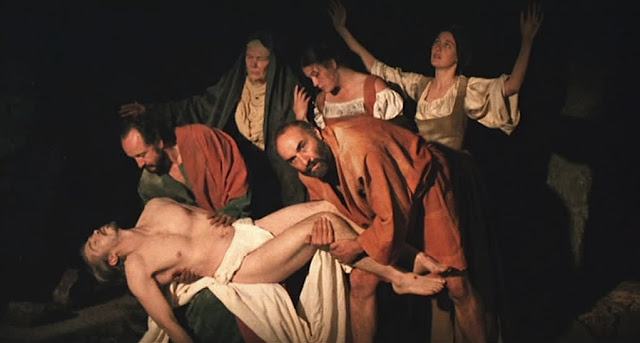 All this manages to not only make the film continually visually striking, but also playfully reminds the audience all the time that they are watching a version of a reality – not a true story but a fictionalisation of the painter’s life. It gives Jarman an artistic licence that he exploits to the full, and makes this a film that really sticks in the memory. It’s an inventiveness you wish you saw more in films rather than slavish historical recreation. 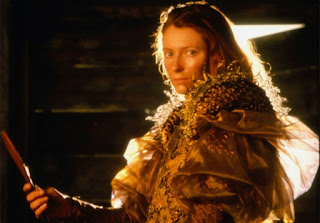 Caravaggio is not a masterpiece – it’s a little too self-consciously arty for that. It almost delights at times in being disjointed and hard to follow. Some scenes leap over what seems like years of events. There is no real narrative through-line. The poetic voiceover can start to wear you down – I searched it for meaning, but I’m not sure if there was much there. Saying that, although this is very much a director’s film, there are some fine performances. Terry does a very good job as the artist himself, capturing a sense of the creative spark behind the eyes. Bean is excellent in one of his first roles as the earthy, insecure Ranuccio. Tilda Swinton however steals the film (it’s easy to see why she became Jarman’s muse) as the beguiling and mysterious Lena.

Caravaggio is that rare thing: a film about an artist that seems to understand art, and feel like a work of art itself. It’s unique and eye-catching and memorable as well as having a neat eye for the tragic. I was strangely mesmerised by it throughout. It’s not a perfect film, but it’s a very good one.
Email ThisBlogThis!Share to TwitterShare to FacebookShare to Pinterest
Labels: 1986, Artist biography, Derek Jarman, Dexter Fletcher, Jonathan Hyde, Michael Gough, Nigel Terry, Robbie Coltrane, Sean Bean, Tilda Swinton