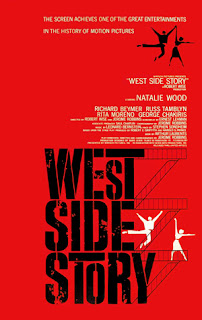 It’s strange to think now, but when it debuted on Broadway, West Side Story failed to win the Tony for Best New Musical (it went to The Music Man). Today, Bernstein and Sondheim’s masterpiece is a touchstone of musical theatre. Part of that surely must be connected to the fact that it’s so well known as a film – and that this triumphant movie production took 10 Oscars as well as holding a place in any list of Greatest Musicals on Film.

The story is of course Romeo and Juliet crossed with intricate ballet and light opera. On the streets of New York, the Jets (working-class white boys) and the Sharks (Puerto Rican immigrants) are two rival gangs fighting a street battle to control their district (via the medium of dance). But danger is about to explode when former leader of the Jets Tony (Richard Beymer) falls in love with Maria (Natalie Wood), the sister of Sharks leader Bernardo (George Chakaris). Will it end well? Surely not with these star-crossed lovers…

You can’t really begin to talk about West Side Story without first talking about the dancing. Not since Astaire and Rogers has a movie been defined so much by its physical grace and rhythmic control of movement. It’s awe-inspiring. Honestly, show-stoppingly, jaw-droppingly impressive. As the dancers defy gravity, physics and the limitations of a normal person’s body, you can’t help but want to spring to your feet and join in (don’t – I guarantee you are not as good). It’s simply amazingly good.

The opening Prologue sets the scene perfectly. It’s not easy to make a film about tough street gangs, where every fight scene is largely expressed through dance – the Prologue, however, does this perfectly, a stylised slow build of increasing musical tempo. From the simple device of clicking fingers, we build continually into an explosion of carefully controlled group choreography, where each of the twenty-odd dancers feels like an individual.

The camera choices are sublime: some shots hover in dramatic aerial shots. Tracking shots highlight the skill of the dancers. The crew dug pits into the tarmac to bury the cameras in so that they could stare straight up at the dancers at some points – during one brilliant sequence Chakiris and the Sharks seem to loom, God-like, over the viewer while moving in perfect synchronicity. It’s beyond a tour-de-force, it’s simply unlike anything else you’ve ever seen on film. The film would’ve deserved Oscars even if it had ended after ten minutes, it’s probably one of the best openings ever.

Fortunately it doesn’t, because there is more exquisite stuff to come. Moreno and Chakiris probably won their Oscars off the back of the scintillatingly “America”, a beautiful whirlygig, part debate, part argument, high-kicking joy of twirling dresses and pirouettes. It’s possibly the most exciting number in the whole film. “Cool” is an unbelievably wild and challenging dance number in a garage, that seems to throw in half a dozen different styles – the set itself seems to be struggling to survive under the rampant pace and passion of the dancers. It’s a deliriously giddy, passionate, dirty number with the actors clearly pushed way beyond their natural ease.

Famous Broadway choreographer Jerome Robbins directed the original production, and was the logical choice for the studio to choreograph the film. Robbins insisted he would only do so if he was also allowed to direct the entire film. A deal was eventually done where Robbins would direct everything involving music and dance, and seasoned professional Robert Wise would handle the rest. Robbins carries most of the credit for why this film really is unique – everything special and different about it is connected to his mastery of choreography.

As it happened, Robbins’ search for perfection was so great he ended up leaving the film running weeks behind and far over budget. After months of rehearsal, when the time came to film, Robbins would dramatically re-work the choreography to exploit locations. This was particularly expensive for the location. As take after take on expensive 65mm film mounted up, the producers eventually dismissed Robbins from the project after filming four numbers (“Prologue”, “Cool”, “America” and “I Feel Pretty”). Although the rest of the numbers used his choreography (and were directed by his assistants) they lack the inspired genius of the other four stand-out numbers. Wise, a skilled hired gun, took care of the rest of the filming. 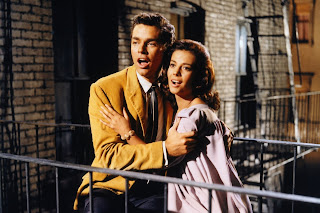 It’s the weakness of West Side Story that very few things in the rest of the film live up to the heady, exhilarating joy of those core numbers. Both Beymer and Wood are uninspiring as the two leads. Wood is not remotely convincingly Puerto Rican, while Beymer is too clean-cut and nice-guy for a kid who was running a street gang not so long ago. The scenes focusing on these two drag– and are rather flatly shot considering the dynamism around anything involving dancing. Wood’s songs are at least memorable – largely because an uncredited Marnie Nixon supplies the singing – but Beymer’s voice replacement isn’t particularly inspiring and both “Maria” and “Tonight” get a bit lost here (he’s no Michael Ball, put it like that).

The script and storyline aren’t always the strongest. It’s a difficult to really remember any of the purely dramatic sequences. Tony and Maria’s meeting on the balcony summons up very little in the way of romantic frisson, let alone any favourable comparisons to Romeo and Juliet. (Truth be told, there is very little chemistry at all between the two performers). You get the feeling the film is reaching for a big socio-political message – hey kids, why don’t we all get along? – but never really quite gets there. It’s not quite got enough thematic weight behind it for the cultural acceptance angle it’s trying to push. But heck, Romeo and Juliet is a tough act to follow, so it’s not a surprise that the film works best as just a romance.

The big exception to the rule that the dramatic moments don’t hold a candle to the dance sequences is Anita’s assault by the Jets late on in the film – an unsettlingly visceral near gang-rape, which isn’t easy to watch, but works brilliantly. In fact any dramatic scene involving Rita Moreno stands out – she burns up the screen as the fiery Anita, a woman bubbling with passion but also with an emotional intelligence and sensitivity that nearly helps our heroes avoid disaster. Moreno’s dancing and singing are first class, but her acting throughout is similarly outstanding – any scene featuring her, your eyes are immediately drawn to her. She’s well matched as well by George Chakiris, another Oscar-winner, who’s a magnetic dancer and singer but also gives Bernardo a brilliant kindly pride laced with arrogance.

All this takes places in a regular technicolour wonderland of a setting. Daniel L. Fapp’s photography is marvellous, creating a rich palette that soaks up colour. Shots of a blood red sky at night set just the right ominous tone. He makes masterful use of colour and shade throughout. I’ve already talked about how the photography brilliantly helps build the impact of the dancers. But every scene is really carefully framed and presented, with the cages and barriers of the playground the gang fights over helping to hammer home the feeling of our heroes being trapped by fate. As you’d expect from Wise (the editor of Citizen Kane) the film is also brilliantly assembled in the editing room.

Parts of West Side Story are of course a bit dated. The dancers, for all their undeniable brilliance, are a little camp for rough and tumble street kids. The film’s costumes and settings look undeniably clean to modern eyes. The casting of Wood in particular as a Puerto Rican is odd today. It’s also probably too long a film – while the musical numbers could happily go on forever, other scenes drag a little. Most of the really strong, memorable material happens in the first half of the film. And like all brilliant works of art, it’s so distinctive it’s almost a little too ripe for parody. Some of the visual flourishes used to indicate fantasy sequences look slightly dated.

But these are niggles in a way, because even if parts of the film are a little bit below par, the overall impact of the film is quite extraordinary. There has never been – and I think never will be – a musical quite like this. I simply can’t imagine such a triumph of group choreography being made, or a film-maker spending such time and money to push the envelope of what it is possible for the human body to do in dance scenes. Despite its faults, I can’t imagine a viewer not being electrified by several sequences in this movie. And at the end of the day, what else is cinema for if not to bring our emotions and feelings to life in vibrant flashes?
Email ThisBlogThis!Share to TwitterShare to FacebookShare to Pinterest
Labels: 1961, Best Picture, George Chakaris, Musicals, Natalie Wood, Richard Beymer, Rita Moreno, Robert Wise, Russ Tamblyn, Stephen Sondheim