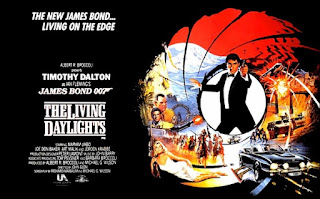 After A View to a Kill, even the Bond producers realised something had to change. Roger Moore at 60, was definitely too long in the tooth to still be the debonair super spy. The producers were quick to land their first choice – TV’s Remington Steele star, Pierce Brosnan. But a last-minute renewal of the cancelled show meant Brosnan was out – and the producers turned to one of the first choices when Connery left: Timothy Dalton. Dalton had considered himself too young in 1969, but the stars aligned now. So we had a new Bond – a younger, sleeker, meaner model. To quote that other franchise with a revolving lead: Change my dear, and it seems not a moment too soon…

James Bond (Timothy Dalton) is tasked to protect a defecting Russian general, Georgi Koskov (Jeroen Krabbé), but during the mission he refuses to take the life of Kara Milovy (Maryam D’Abo), a cello player from the Viennese orchestra turned sniper, whom he believes to be nothing but an amateur. When Koskov is snatched by mysterious forces, Bond must trace his only link to Koskov: Kara Milovy, who he quickly discovers is Koskov’s lover. Soon he questions the legitimacy of the defection – and the links to sinister American arms dealer Brad Whittaker (Joe Don Baker).

First and foremost, this is Timothy Dalton’s film. His Bond was something so radically different from Moore that, to a certain extent, the public wasn’t ready for it. Dalton went right back to Fleming’s books, and brought to the screen for the first time a Bond who actually feels like the character of the novel: world-weary, cynical, reluctant (even bitter), a man on the edge of anger with a darkness behind the charm. When Bond is threatened by being reported to M by his colleague Saunders (an excellent Thomas Wheatley), he snaps in response: “If he fires me, I’ll thank him for it”. Can anyone imagine Moore or Connery saying that?

He’s also a man capable of genuine emotion and loyalty, who forms friendships and relationships throughout the film that we haven’t really seen before. Sure some of the comic elements feel shaped more for Moore’s lips than Dalton’s, but Dalton’s Bond made everything feel more grounded than the overblown later Moore movies. To put it bluntly, Dalton makes Bond feel like a human being, not just a super-hero. There’s a reason he’s been called the best actor to take on the role. He treats it like an acting job. He might be the best Bond.

This works particularly interestingly as this film is a sort of half-way-house between a Moore film and an early Connery film. The tone of the film is kept relatively light (a key chain that works via a wolf whistle! Skiing down a slope on a cello case!), but the villains of the piece are relatively low key (they want to make a killing on drug deals) and there is a nice mix between some exciting (but not over the top) stunts and an almost Hitchcockian feel.

This Hitchcock feel is not least in the (rather sweet) romance between Bond and Kara, with its Notorious feel of a man manipulating a woman while genuinely growing to care for her. Setting most of these scenes in a romantically shot Vienna also helps enormously, with its noirish Third Man feel. Unlike many other Bonds, the relationship here between Bond and the girl feels like a genuine romance. Kara may be a bit of a damsel in distress, but she feels like a warm-hearted, decent person wrapped up in events beyond her experience. And although audiences at the time, accustomed to Moore and Connery’s unending conquests, were critical of the reduction in Bond’s sexual adventures, making him less promiscuous results in Bond feeling like much more of a jaded romantic than a casual philanderer, and makes his relationship with Kara much more resonant.

The whole film feels much more grounded in reality, without losing a sense of fun. The film does its action sequences extraordinarily well. The car chase through snowy Austria is brilliantly done (the car gets a series of stand out gadgets), with Dalton delivering each new revelation of the car with a winning dryness. This sequence develops into the brilliantly funny cello-case skiing sequence (“We’ve nothing to declare!”/”Except a cello!”). Again, the sequence works so well because it is skilfully counterbalanced with the almost Le Carre-ish piece of spycraft Bond uses first to get Kara out from the under noses of her KGB watchers.

Interestingly, one of its most striking sequences doesn’t even involve Bond: that plaudit has to go to the thrilling one-man assault by unstoppable ubermensch Necros on the MI6 house where Koskov is being held. A particular showcase here is the brutal kitchen fight between Necros and an MI6 officer, surely the greatest fight in the series not to feature Bond (and all the more exciting as you don’t know what could happen to these characters), plus it’s great to see someone in MI6 other than Bond being able to handle themselves.

The final major sequence of the film, with Necros and Bond fighting while clinging for their lives to a net, dangling out the back of a plane, is a truly striking action set-piece, a real vertigo inducing stand-out. If you can put to one side in your head the fact that Bond’s key allies during the whole Afghanistan sequence of this film are basically Al-Qaida in an earlier form (with Art Malik’s charming Kamran Shah basically exactly the sort of man who went on to become Osama Bin-Laden), and you can enjoy the sequence for its terrific excitement. 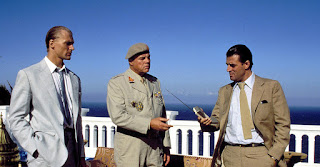 The weaknesses of the film are in its structure. Both villains (and their plot) are underwhelming. Koskov is something very different – charming, feckless, manipulative (he’s quite well played by Krabbé) – but hardly much of a threat, and he drops out of the film for a chunk in the middle. Joe Don Baker’s Whittaker is too distant from the central plot for him to earn his role as Bond’s final antagonist. It feels like the writers have split one character into two – a Koskov who hid Whittaker’s ruthlessness and bullying under a charming, foolish veneer might have really worked. Their plan is grounded in a reassuring reality, but it never feels like that big a deal. Its complexity is also probably a little too great for the narrow focus the film gives it. The final Whittaker-Bond confrontation is underwhelming considering what we’ve seen before.

But that is because this is Dalton’s film – or, if you like, a Bond film focused on Bond. From the stirring introduction on a training mission parachuting into Gibraltar, Dalton seizes the film by the scruff of the neck. Unlike nearly any other Bond film before now, this feels like one about the type of man Bond is – the killer with a well-hidden heart, the cynic who believes in his cause. He has great chemistry with his fellow actors – not least John Rhys-Davies, excellent as General Pushkin – and above all romantic chemistry with Maryam d’Abo.

The humour allows us to warm to Bond, while the darkness Dalton brings to the role helps us invest emotionally in his more tortured interpretation. All else aside, TLD is damn good fun with some excellent action sequences and a terrific score. It’s very much in the upper echelon of Bond films.
Email ThisBlogThis!Share to TwitterShare to FacebookShare to Pinterest
Labels: 1987, Action Films, Art Malik, James Bond, Jeroen Krabbé, Joe Don Baker, John Glen, John Rhys-Davies, Maryam D'Abo, Spy thrillers, Timothy Dalton