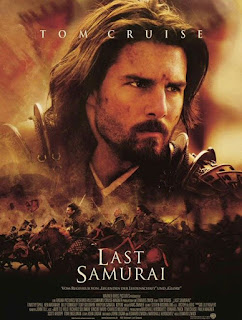 Nathan Algren (Tom Cruise) is a legendary but traumatised veteran of the US’s war against the Native Americans. In 1877 he is recruited by the Japanese government to train their new modern army. Japan is a country split between the old and the new, with the samurai leading a revolt against modernisation. After the army is defeated by the samurai, Algren is taken captive. He quickly finds himself enamoured with Samurai culture, not least because of the inspiring charisma and nobility of the samurai leader Lord Katsumoto (Ken Watanabe).

The white man in the noble warrior culture: it’s a narrative structure that never fails. The Last Samurai fits very neatly into a familiar pattern: a story about an exotic non-Western culture, with a white Western character placed at the forefront. Of course the samurai culture is portrayed with a romantic longing, with the charms of its honourable life impossible to resist for our hero, all too familiar with the corruption of our culture. It’s been a pretty standard structure ever since Dances with Wolves. And of course, the white man is left standing as the only witness to the brave sacrifices of the noble-savages-who--weren’t-as-savage-as-we-first-thought.

What this structure does is minimise the entire point of the story. This is supposedly a story about a major shift in Japanese culture – from the old feudal world of the samurai to a more mechanised, modern society. In this cultural shift, some people got left behind, unable to let go of the old ways. It’s a tragedy for that old way of life, but this film muddies that water with its redemption structure for Algren. So by the end of the film, we may be looking at the destruction of the samurai culture and the deaths of most of the characters we’ve spent the film (sort of) getting to know – but hey at least the American lead has found peace and contentment.

So the nominal “last samurai” himself, Katsumoto, becomes a supporting character in his own film, a spirit animal to guide Algren towards a better understanding of himself and of the world. Katsumoto is presented romantically, a noble, kindly, principled man who mixes a love of poetry and flowers and a wry wit with a fanatical ruthlessness in battle. It’s the quintessential “noble savage” of Hollywood lore. All of which is not a criticism of Ken Watanabe, who is excellent – a guy whom you find yourself falling in love with, totally believable as the sort of man others would follow to the death. It’s a standard Hollywood cliché, albeit one presented with commitment.

Having said all that, the film does treat Japanese culture with an immense respect, even if it does so through a romantic lens. It’s also pretty unflinching at the more brutal side of the samurai culture – its expectations of suicide on failure, its pride and unwillingness to compromise. Of course, these are also later embraced as part of its nobility, but at least they are there. The film does also touch on some points of disagreement between East and West – Algren has nothing but contempt for Custer’s ego-driven suicidal last stand, while Katsumoto finds the story enchantingly inspired – but doesn’t allow these to get in the way of the romance. And by the end of the film, there is certainly no criticism for the suicidal charge Algren and Katsumoto lead the samurai into.

The modernising Japanese forces are given far less understanding. Of course, historically, if Japan wished to engage with the modern world and trade, it needed to undergo a certain level of progression from its feudal background. Historically this shift may have been too drastic – a rejection of the past rather than a development – but needless to say, here the modernising Japanese characters are uniformly presented as cowardly, selfish and greedy. Not to be outdone, it also introduces a racist American colonel, with a career of brutal campaigns against Native Americans, to serve as Algren’s nemesis (and to provide a small, audience-pleasing victory when he is killed off in the final battle).

I’m being very hard on The Last Samurai, which, within the confines of the Hollywood predictability it inhabits, is in fact a fairly decent film. Cruise is rather good as Algren, even if his drunken self-loathing is sometimes over played. He’s perhaps not completely convincing as a bitter ex-soldier, but he nails the depression and lost-soul nature of Algren. The Japanese actors are all excellent – there is barely a weak link in the cast, with Koyuki particularly soulful as the widow of a man killed by Algren.

The film is brilliantly shot by John Toll and looks wonderful, and even if it is slightly predictable and directed with a mundane lack of imagination (Edward Zwick is a competent but uninspired director and he creates an epic here in that image) it’s still fine and entertaining viewing. Cruise and especially Watanabe create heroes you care for. The final battle sequence does move, with its final triumph of mechanisation over blind courage. Zwick does have an eye for capturing the warmth and simplicity of the samurai village life, and he and screenwriter John Logan deserve a lot of credit for their research, respect and understanding of Japanese culture (the film was well received in Japan). The Last Samurai is a clichéd and slightly flawed epic, but it has a nobility and honesty to it. With some excellent performances, it is more than entertaining enough.
Email ThisBlogThis!Share to TwitterShare to FacebookShare to Pinterest
Labels: 2003, Billy Connolly, Hiroyuki Sanada, Historical epics, Japanese cinema, Ken Watanabe, Shin Koyamada, Timothy Spall, Tom Cruise, Tony Goldwyn