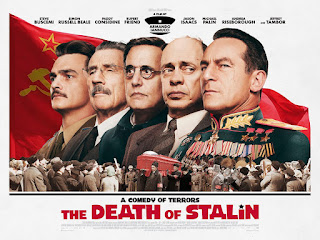 Armando Iannucci is a brilliant television satirist, who spring to wider fame with the success of foul mouthed political satire The Thick of It (re-imagined as Veep in the USA). His sweaty, sweary, fly-on-the-wall style, and characters who embody the panicked agitation of the nakedly ambitious but not-too-bright, was a perfect match for our modern world. Does the style work for the past? You betcha.

In Soviet Russia, a country near paralysed with terror, the ruthless dictator Stalin dies. This starts an immediate scramble to succeed him, with the leading candidates being weak-willed, vain and foolish deputy Malenkov (Jeffrey Tambor), vaguely principled but fiercely ambitious opportunist Khrushchev (Steve Buscemi) and sinisterly sadistic police chief Beria (Simon Russell Beale). Soviet Russia though is a pretty ruthless place for political manoeuvring, with retirement usually coming in the form of a single bullet to the back of the head.

First off the bat, The Death of Stalin is a blisteringly funny film, a real laugh-out loud riot. Why does it work so well? Because it understands that, hand-in-hand with the horror, Stalinist Russia was so completely barking mad that it lends itself completely to black comedy. Imagine The Thick of It, but with Malcolm Tucker executing rather than dismissing terrified ministers. Welcome to the madness. Events that seem crazy are pretty much true: although time has been telescoped, the struggle for the succession did more or less play out like this (with less swearing). 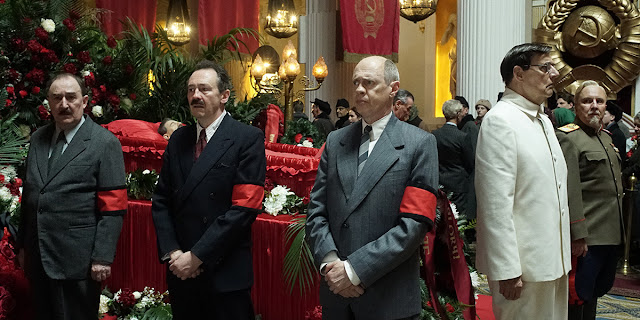 Every scene of this dark farce has a memorable, stand-out line or moment. The sweaty panic of these over-promoted yes-men is brilliantly reminiscent of the sort of panic you can imagine seeing in your office, with the exception that it probably isn’t literally life-and-death. Iannucci completely understands the wild improvisation of the fiercely ambitious in high-stress situations. If you think the ministers of The Thick of It were adrift when confronted with parliamentary enquiries, imagine how their counterparts struggle when faced with the threats of a bullet in the head.

Because that’s the great thing about this film – while still being hilariously foul-mouthed, it actually gives a pretty good idea of what it might have been like to live in Soviet Russia. The characters are constantly having to adjust to who is in favour and who isn’t, what it is permissible to think and say and what isn’t, who is “dead and who isn’t”. Iannucci totally understands human nature doesn’t change – those left alive around Stalin are just the sort of shallow, selfish, weaklings he’s been lampooning in The Thick of It. Most of the ordinary people we see are just desperate to keep their heads down – getting noticed for regular joes in this film is basically a death sentence.

The opening sequence really gets this idea across. Paddy Considine is hilariously nervy and terrified as a radio producer ordered to send a recording of the live concert they’ve just broadcast (unrecorded) to Stalin. The frantic rush to reassemble the orchestra, fill the audience up again with people from the street, replace the conductor (the original having passed out in terror at the possibility that he may have been bugged questioning Stalin’s musical knowledge) is brilliantly funny – but works because the genuine expectation that doing the slightest thing wrong could lead to immediate execution is completely clear. Especially as the scene is intercut with Beria’s heavies rounding up innocent civilians to disappear into a gulag. 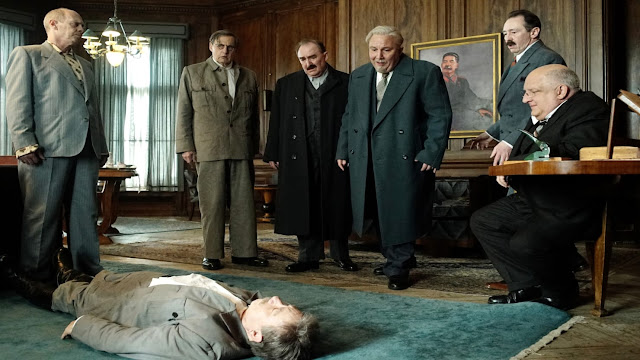 Iannucci doesn’t dodge the ruthlessness. The film is punctured throughout by executions, often carried out with a black farcical desperation. It doesn’t shy away from the brutality of Beria, whose violence, sadism and pathological rape addiction we are constantly reminded of (and which are even more effectively sinister as he’s played by the cuddly Simon Russell Beale). In turn, a frantic Beria berates the rest of the politburo for their participation in the orgy of killings and show trials Stalin organised. We see people about to be taken to their deaths hurriedly offering terrified goodbyes to their loved ones. The final sequence of the film, as the battle for the succession reaches its end-game, tones down the jokes to give us an alarmingly realistic picture of a coup. Black farce ending in death: it’s as legitimate a picture as any of living in Stalinist Russia.

All of this is presented in a razor-sharp and witty script, and the cast who deliver it are brilliant. In a fantastic touch, the actors (with the exception of Isaacs) use their own accents, which only adds to the crazy fun. The acting is, across the board, fabulous. Russell Beale gives his greatest ever film performance as a grubby, ambitious, not-quite-as-smart-as-he-thinks Beria, with bonhomie only lightly hiding his chilling sadism and cruelty. Buscemi is equally brilliant as Khrushchev, who has the ego and self-delusion to convince himself that he is the only hope for a reformed USSR, while actually being a weaselly political player with naked ambition. 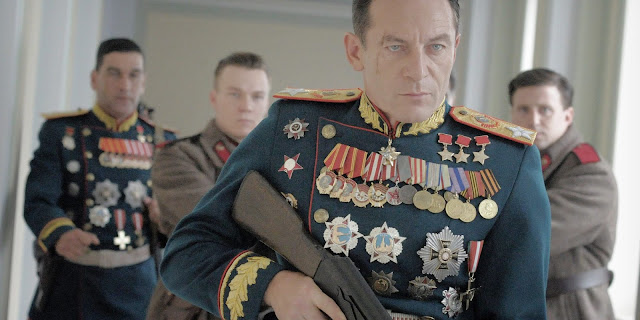 Around these two central players there is a gallery of supporting roles. Tambor gives a brilliant moral and intellectual shallowness to the hapless Malenkov. Friend is hysterical as Stalin’s drunken son, a deluded man-child barely tolerated by those around him. Palin’s cuddliness works perfectly as fanatical Stalinist Molotov. Whitehouse, Crowley and Chadihi are also excellent, while Riseborough does well with a thankless role as Stalin’s daughter. The film may be hijacked though by Isaacs as a swaggeringly blunt General Zhukov, re-imagined as a bombastic, plain spoken Yorkshireman, literally entering the film with a bang half-way through and bagging most of the best lines.

The Death of Stalin is not just a brilliantly hilarious comedy, it also feels like a film that completely understands both the terror and the confused ineptitude of dictatorship. In a world where it is death to question the supreme leader, is it any surprise that his underlings are all such clueless, ambitious idiots? Has anyone else understood the black comedy of dictatorship before? I’m not sure they have. You’ll laugh dozens and dozens of times in this film. And then you’ll remember at the end that when this shit happens, people die. This might be the best thing Iannucci has ever made.
Email ThisBlogThis!Share to TwitterShare to FacebookShare to Pinterest
Labels: 2017, Andrea Riseborough, Armando Iannucci, Comedy, Jason Isaacs, Jeffrey Tambor, Michael Palin, Olga Kurylenko, Paddy Considine, Political satire, Rupert Friend, Simon Russell Beale, Steve Buscemi