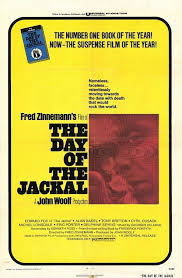 The definition of lazy criticism is to say a story doesn’t work because we know the outcome. If that was the case, no production of Hamlet would ever work, and no adaptation of a best-selling book would ever find favour with an audience. We’d be bored by films based on history and we’d be even more indifferent to the hundreds of films made every year that follow accepted narrative structures. What makes a film compelling is often not the destination, but the journey. How do we get there? What do we learn? How does it make us feel? All of these things are keenly observed throughout Fred Zinnemann’s masterful adaptation of The Day of the Jackal.

The year is 1962 and the French President Charles de Gaulle is blamed by many for weakening France by granting independence to Algeria. The Organisation Armée Secrète (OAS) hire an English professional assassin known only as The Jackal (Edward Fox) to assassinate De Gaulle. When word of the target leaks to the panicked French Government, Commissioner Claude Lebel (Michael Lonsdale) is given an impossible task – identify a man of whom the government knows nothing and stop him from carrying out a plan only he knows the details of. Meanwhile, the Jackal relentlessly goes about his meticulous planning.

So anyone with passing familiarity with history will know that de Gaulle was not assassinated in the early 60s. Watching The Day of the Jackal, you know that the Jackal will fail. But that’s not the point of the film. Instead it’s a masterful, streamlined thriller that completely understands how much we can invest in watching someone go about a job with calm, cool professionalism. It’s the ingenuity and meticulousness that makes the film compelling, the way each angle of the Jackal’s plan is carefully considered and information slowly delivered to the audience. In some areas we are a couple of steps ahead of Lebel’s search. In others we are as far behind as he is: we may know the weapon and the Jackal’s secret identities, but we know as little about his final plan as Lebel does – it’s only when it’s revealed that all the pieces we’ve seen make perfect sense.

It’s a film that has been assembled with all the grace and skill of a master clockmaker. Zinnemann’s direction and Kenneth Ross’ taut screenplay make every second count. There isn’t a single piece of flab on the bones of this movie, every scene carries a piece of vital information that contributes to the overall picture. Zinnemann sprinkles the film with careful passing shots of calendars and clocks, making the sense of a countdown towards the Jackal’s strike hang intimidatingly over the whole film. The film is gripping, right from its opening reconstruction of the almost-successful OAS assassination attempt on De Gaulle in 1962. Everything feels perfectly interlinked and connected, each scene brilliantly builds on top of the ones before.

This is quite simply an unshakeably brilliant engine of a film, a relentless ride with tension and excitement dripping from every frame. It’s not afraid to be cruel or dangerous – and some of the victims are truly blameless – and it’s not afraid to show that violence and cruelty are weapons as much for the authorities as the Jackal (the cruellest act, after all, is committed by the French Army on poor loyal Wawlinski).

A large part of the success of the film rests on Edward Fox’s performance in the lead. Fox gives the Jackal an unshakeable, public-school, confidence, an attractive resolve that sees him meet every obstacle with a cool elán, resolutely unperplexed by anything that he encounters. Fox’s superb performance succeeds in making you engage with (and even root for) a man who is a cold-blooded professional killer, who commits murder (when provoked) without hesitation. How does this happen? Again it’s his efficiency, his expertise. The film totally understands how engrossing watching talented people go about their work can be.

The film makes the minutia of setting up an operation immensely compelling. In careful detail, we see exactly how the Jackal goes about getting a false passport from the authorities. How he scopes out a potential place to conduct the assassination. His careful preparation of disguises and fake identities. In one gloriously done scene, we see him practise using his specially constructed rifle on a melon at a huge range. Carefully he takes a series of shots at the melon, adjusting the sight each time to make the weapon as accurate as possible. The scene is a showcase for the Jackal’s meticulous professionalism (you can see why the producers were outraged when the scene was cut from a TV screening in the 1980s – it’s practically a highlight of the movie).

Similar investment, however, is made in the detailed footwork involved in tracing and detecting the Jackal by the French and English police. Michael Lonsdale is a perfect foil for Fox’s urbane cool, with his dour, grey, crumpled Label, a man selected somewhat unwillingly for a mission but who slowly reveals the cool head and nerves of steel that made him perfect for the job. The police-work used to try and close the net on the Jackal is as intricate as the hitman’s own work – careful plodding through files and methodical calculation and educated guesswork. It’s as far from the rush and tumble of Hollywood as you can imagine – but somehow, because it feels so real, every discovery against the odds by the authorities becomes hard-won and exciting. The sense of a net being skilfully built also serves to make the Jackal’s skilful evasion of each trap all the more compelling.

And the tense race against time lasts for the whole of the film. The film brilliantly keeps this cat-and-mouse game alive, with the police and the Jackal constantly leap-frogging each other to stay one step ahead. Each move and counter-move has all the intricacy of a chess game. There are enough twists and turns to keep every audience member gripped. The eventual assassination attempt itself is built up to beautifully – a wordless, tense but brilliantly assembled montage of liberation day celebrations keeps both the police and the audience on their toes as to where the Jackal will strike from. The finale of the film turns on a twist of fate that is simply a brilliant coup de theatre. There is even a droll little coda that deepens the mystery of the Jackal even further.

Zinnemann’s direction throughout is flawless – calm, measured and methodical, and never allowing flash or bombast to drown out events. It’s helped as well by the wonderful cast of actors – a real who’s-who of British and French character actor talent, with Alan Badel’s smooth Interior Minister, Eric Porter’s cool but fanatic OAS leader, Cyril Cusack’s quiet gunsmith and Derek Jacobi’s eager young detective particular standouts. I also have a lot of time for Olga Georges-Picot’s quietly moving performance of a woman pushed to extreme actions by grief.

The Day of the Jackal is another of those near perfect movies. Everything it sets out to do it does perfectly, and it rewards constant viewing. It’s got some terrific unflashy performances and is a perfect demonstration of why professionalism and expertise can be so engrossing. It wraps this up into a deliciously tense confection, where every scene bubbles with undercurrents of drama and danger. There is not an off-beat – instead it’s a brilliant piece of pulp cinema that transcends itself into being something truly adept and dramatic. You can’t take your eyes off it for a second. I don’t hesitate for a second in saying it’s one my favourite thrillers.
Email ThisBlogThis!Share to TwitterShare to FacebookShare to Pinterest
Labels: 1973, Alan Badel, Cyril Cusack, Delphine Seyrig, Derek Jacobi, Edward Fox, Fred Zinnemann, Literary adaptations, Michael Lonsdale, Olga Georges-Picot, Thrillers