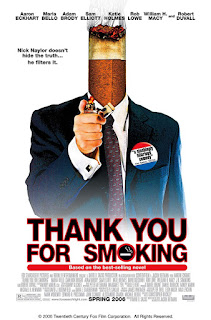 Lobbyists: paid smooth talkers, whose goal is to win influence for often unattractive industries. Not a popular profession. Thank You For Smoking follows a few weeks in the life of Nick Naylor (Aaron Eckhart), a lobbyist for the tobacco industry. With senate hearings underway to place a skull-and-crossbones picture on every pack of cigarettes sold, Naylor has a host of pressures to deal with, not least rebuilding a relationship with his young son (Cameron Bright).

Thank You For Smoking is a smart and amusing satire on a pretty simple target. It’s a great showpiece for the skills of Jason Reitman, who directs his sharply written script with wit and verve. Reitman crafts a satire that’s never too heavy-handed, a well-balanced film that’s about morality and freedom of choice, without banging the righteous drum to death. He’s also got a keen eye for the quick and effective gag, meaning the film moves swiftly from punchline to punchline.

It helps a great deal that Aaron Eckhart is terrific in the lead role: handsome, cocky, charming but with a strange vulnerability. Nick Naylor a fascinating character: while he does adjust his views on issues, he is never humbled by events, and there is no “road to Damascus” moment where he denounces his career. He’s totally confident in his skin, who has come to terms with his role and doesn’t care what people think of him. And you’ve got to respect a man so skilled that he gets a 20 year-old dying of cancer from smoking to shake his hand on live television.

Similarly, the film avoids an open condemnation of smoking (it doesn’t even feature a single character smoking). If anything, the real targets for its criticism are anti-smoking campaigners (William H Macy’s sanctimonious senator is skin-crawling and unbelievably smug and petty), and the opportunistic recipients of lobbying. The film makes clear smoking is a bad habit, but also pushes the right we have to choose – if we want to poison ourselves, we should do so! I’m not sure if Reitman is willing to admit an argument like this is partially an abuse of ill-informed free speech, but at least he hopes we are smart enough to make up our own minds. It's all part of the careful discussion of lobbying - what kind of person can be swayed by a professional counter-argument man?

There are several other terrific performances. Simmons is hilarious as Naylor’s aggressively vocal boss. Rob Lowe offers a brilliant self-parody as a smoothly empty Hollywood super-agent obsessed with Japanese culture. Maria Bello and David Koechner are both sharply witty as Naylor’s fellow lobbyists for alcohol and firearms respectively. The scenes between the three of these “Merchants of Death” (or “The MOD Squad” as they call themselves) offer a sharply funny commentary on the action throughout.

If the film has a problem though, it’s that it never feels like it develops into being much more than a framework for some good jokes. There is a thinly veiled morality tale here, but the film never really feels like it makes a point or a conclusion. Sure there are tonnes of excellent jokes and laugh-out-loud moments, but is it much more than a series of skilled sketches? Eckhart is of course brilliant in each of these, but there is often a sense of watching a series of misconnected events. Characters drop in and swiftly out of the movie. There is no overarching plot, as such.

The film largely dodges any real narrative conclusion. This is of course part of the smartness of its design – it’s not trying to make moral points, or hector us on health – but it also makes the film feel slightly empty, narratively adrift. Little changes for the characters from the start to the end of the story. Of course, the film is not so crude as to make its hero learn “a lesson”, but it also means Naylor is a more difficult character to sustain interest in over a period of time: complete lack of self-doubt does not tend to make great drama.

It’s very funny, smart, well written and acted. However, while brave enough to avoid predictability, it’s also inconsistent enough to not have a real shape. Some moments – in particular the relationship between Naylor and his son – lean heavily on cliché. Some of its more unusual moments – especially a sequence where Naylor is kidnapped by anti-smoking campaigners – fall the wrong side of surreal. But for all that it’s an imperfect film, it is certainly funny enough to justify itself and features a superb performance of alpha-male arrogance from Aaron Eckhart (I’ve asked this elsewhere, but how unlucky is this guy to not be a bigger star?). I guarantee you’ll laugh several times when you watch this – and if nothing else you’ll have a think about lobbying.
Email ThisBlogThis!Share to TwitterShare to FacebookShare to Pinterest
Labels: 2006, Aaron Eckhart, Corporate Satire, David Koechner, Hollywood satire, J.K. Simmons, Jason Reitman, Katie Holmes, Maria Bello, Rob Lowe, Robert Duvall, Sam Elliott, William H. Macy