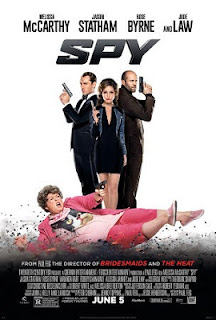 Comedy is an unusual thing to write about, I often find. Unlike any other film genre, you know immediately whether it works or not, ‘cos if you ain’t laughing it probably ain’t working. Well the good thing is that Spy does work, as I certainly laughed. It’s actually a fairly well structured comedy, a smart parody of Bondish action films matched with the foul-mouthed crudity you get in the films from the Feig/Apatow stable.

Susan Cooper (Melissa McCarthy) is the cheery deskbound analyst who provides real-time data and intel to would-be 007 Bradley Fine (Jude Law). But after disaster strikes, Susan volunteers to go into the field to find out as much as she can about Rayna Boyanov (Rose Byrne), the daughter of a rogue arms dealer who is taking over the family business. Despite the concerns of her boss – and super-macho fellow agent Rick Ford (Jason Statham) – Susan proves surprisingly adept at espionage, disguise and above all action.

What Spy does well is that it feels like it’s been written and shot with a bit of discipline, rather than the over-indulged and forced “improvisation” that so often blights these sort of comedies. It feels more controlled, and therefore easier to engage with – we are watching a group of good actors tell a story, rather than a gang of comedians showing off. I think this is helped by the fact that most of the cast are not natural comedians, but instead actors delivering gags with skill. Feig also shoots the film with zip and punch – most scenes don’t drag on indulging forced banter.

Melissa McCarthy is very  good as the rather sweet lead, torn between the role she has given herself in life, and her own desire to use her capabilities. Her character delivers many of the comic moments of the film, but she’s not the joke – instead she is shown to be brilliantly proficient both as the “eyes and ears” of Jude Law’s suave Bond-spoof role, and also as the woman in the field. McCarthy’s comic timing is matched with an affection for her character that makes her likeable and easy to empathise with. What she creates here is a genuine character who grows and develops as the film progresses.

The film’s real weapon is the strong cast of proper actors giving expert comic turns. Rose Byrne is hilarious as an imperiously bitchy, foul-mouthed villain who makes every line into a thinly veiled (and often not veiled at all) insult. Jason Statham gives probably a career-best performance as a ludicrously macho secret agent bragging incessantly about a string of unlikely sounding exploits, while being barely competent in the field. Who knew The Transporter could do such a neat line in self-parody? Allison Janney’s foul-mouthed, impatient CIA boss and Miranda Hart’s ditzy surveillance expert offer similarly rich comic roles. These actors know that the trick of real comedy is to deliver well prepared punchlines with controlled efficiency rather than crummy flights of fancy.

Spy also works because it has an actual story, and mixes this effectively with action and hi-jinks that feel like solid spoofs of Bondish films but are also genuinely entertaining in themselves. It’s a plot that stands (more or less) on its own, rather than feeling like a shoddy framework to hang rude jokes on. As such, the rude jokes complement by the plot (rather than crushing it) and most land with a genuine chuckle. It’s also lovely to have a film that places female characters so front-and-centre, not as props or as “sexy fighting women” (I’m looking at you Pride and Prejudice and Zombies) but as confident individuals who know who they are and are not defined by their relationship to a man. McCarthy is terrific, as are the rest of the cast. This is a film you will definitely enjoy.
Email ThisBlogThis!Share to TwitterShare to FacebookShare to Pinterest
Labels: 2015, Allison Janney, Bobby Cannavale, Comedy, Jason Statham, Jude Law, Melissa McCarthy, Miranda Hart, Morena Baccarin, Rose Byrne, Spoof film, Spy thrillers