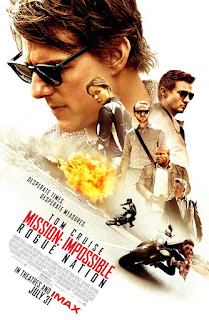 Tom Cruise may be getting on a bit now, but he still does his own stunts with reckless disregard for his own safety: part of the franchise’s appeal is seeing the latest insane thing the Crusier will do. In M:I RN he gets this out of the way early (pre-credits) with a madcap stunt involving holding onto a plane while it takes off. A clever little tease, if for no other reason that no-one can complain about it being a spoiler when said stunt was placed on the poster and all the trailers, when it’s literally the first thing he does in the film.

Anyway, the mission accepted this time is Ethan Hunt (Tom Cruise) going toe-to-toe with a shadowy organisation known as The Syndicate (a sort of evil IMF), run by the serenely sinister Solomon Lane (Sean Harris). Things are made more difficult by IMF being disbanded (again!) by CIA director Alan Hunley (Alec Baldwin). However, help is at hand from old friends Benji (Simon Pegg), Brandt (Jeremy Renner) and Luther (Ving Rhames) – and possibly from mysterious double (or is it triple?) agent Ilsa Faust (Rebecca Ferguson) who may or may not be playing for the angels.

This continues the rich vein of form for this series. It’s light, fast-paced and huge amounts of fun that bombs along with plenty of cool stuff happening all the time. Once again, the stunts are pretty stunning and the set-pieces feel like they offer fresh alternatives. In fact Mission: Impossible – Rogue Nation might be one of the most fun entries in what’s already a hugely enjoyable franchise.

It’s still very much the Cruise franchise though. There’s a fascinating documentary on the DVD. It’s called “Cruise Control”, which is a revealing pun while you watch Tom constantly stand over the shoulder of Chris McQuarrie during shooting. He sets the camera, he storyboards the scenes, he talks to the actors, he edits the film. To all intents and purposes, he’s at lease the co-director. Perhaps this is why Cruise is so overwhelmingly the focus of the film. He spends a good 15 minutes displaying his chiselled body topless. Alec Baldwin even has a ludicrous speech where he calls Hunt “the living manifestation of destiny”. Fun as the film is, make no mistake it’s a showpiece for Cruise.

Not that there is much wrong with that if the end result is such good fun. Simon Pegg does a good job of puncturing the pretentions. Every 15 minutes we also get some sort of gripping action set-piece: Tom fighting in the Vienna Opera House, Tom holding his breath in an underwater computer bank for an unfeasibly long period of time, Tom driving a car then a motorbike (no helmet!) through a series of crazily risky chases… Even when escaping from captivity early from the film, he springs his escape with a nifty upside-down acrobatic jump-climb from a pole. Sure it’s all Tom, but he does it all so well that you can’t not be entertained.

But away from Tom, there is actually a nice sense of family that keeps the story bubbling over. Benji and Hunt increasingly feel like heterosexual life partners (in a really nice touch, it’s Benji who fills the damsel in distress role at the end of the film). The other returning characters, Brandt and Luther, don’t have masses to do but immediately settle into the bickering dynamic that keeps the family ticking over. Ilsa Faust is thrown into this boys-only club partly as a femme fatale, partly as some sort of a potential surrogate stepmum, who the kids are working out whether to trust.

Ilsa Faust could be the best thing about the film, a sort of super-efficient female version of Ethan, bests him a couple of times, and can do all the running, punching, shooting and driving that Tom does almost as well. Sure the camera can’t quite resist a few tracking shots up her body in a nice dress or motorcycle gear, but all-in-all she’s pretty well presented. There is a curious semi-flirtatious, semi-siblingy relationship between Faust and Hunt, with the film eventually settling as a kinda sweet dance of “what might have been”. Ferguson is terrific in the role, not only matching Tom’s athleticism, but also giving Faust a sort of arch mysteriousness. Goodness only knows what Hunt really makes of the first female interest he’s had in the series who can match him.

McQuarrie may, I suspect, be as much Cruise’s collaborator as the director, but he does craft an exciting and confident piece of film making. The Syndicate plot line is suitably twisty and turny – and helped by Sean Harris’ softly spoken, arrogant menace as Lane. You’ll be kept guessing as to the true agenda of nearly everyone involved. Simon McBurney offers good smarm as a shady MI6 head (called, bizarrely, Chief Attlee at every turn hardly the title you’d expect). A spycraft action sequence at the Vienna Opera House is a brilliantly entertaining routine of misdirection, which feels close in tone to the original Mission: Impossible film in its old-school smarts behind new-school flash.

Rogue Nation is, quite simply, a damn entertaining thrill ride – and it doesn’t really have pretensions to be more than that. McQuarrie and Cruise keep the action churning along nicely, each of the thrilling set pieces is exactly that, and the core characters on this rollercoaster are engaging and interesting. McQuarrie is a skilled enough writer to rope together some memorable scenes among the mayhem. It’s charming and hugely entertaining – any doubt that this franchise isn’t here for the long term can be firmly dispelled.
Email ThisBlogThis!Share to TwitterShare to FacebookShare to Pinterest
Labels: 2015, Action Films, Alec Baldwin, Jeremy Renner, Mission Impossible, Rebecca Ferguson, Sean Harris, Simon McBurney, Simon Pegg, Spy thrillers, Tom Cruise, Tom Hollander, Ving Rhames