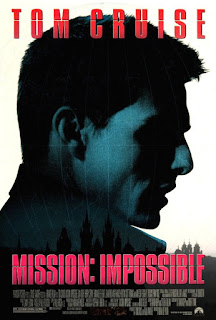 Ethan Hunt (Tom Cruise) is framed as a traitor after a disastrous mission in Prague. While trying to reclaim a list of agents’ cover names, Cruise and his team are betrayed by a mole within IMF. The rest of his team, including his mentor Jim Phelps (Jon Voight), are killed though Phelps’ wife Claire (Emmanuelle Béart) survives. On the run, he has to steal the real secret list himself to help discover the identity of the traitor.

Who would have thought over 20 years later Tom Cruise would still be heading out on Impossible Missions? The success of the franchise is rooted in this engaging spy thriller. How many times have I seen this film? Countless times. It’s inventive and playful. It’s got a decently intriguing plot that keeps you on your toes.  Above all it’s fun.

At the time of its release people talked about its impenetrable plot, but it’s basically a standard “double cross” film. Someone we think is a hero is basically a wrong ‘un, so our hero has to follow every means in his power to find out who it is – including pretending to be a wrong ‘un himself. Understand that, and the plot is pretty basic. The main reason people find it confusing is the film assumes you’re smart enough to follow what’s going on, without characters sitting down and spelling everything out. Isn’t clumsy exposition the sort of thing we criticise other films for? Isn’t it nice not to have a film that just assumes you can follow the whole thing? 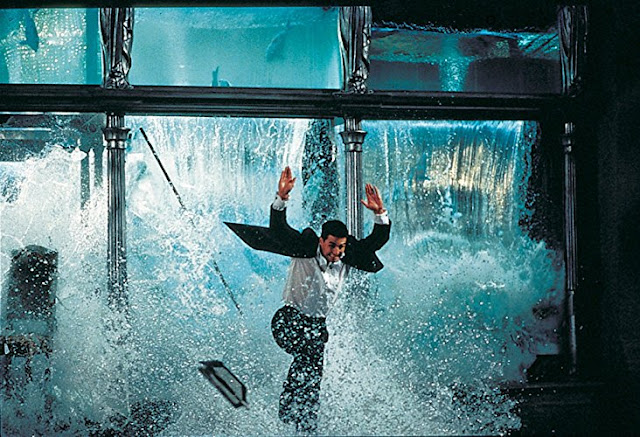 Anyway, the plot and characters are largely there to carry us from one spectacle to another. The film starts with a bang. Can you think of many films that kill off most of the cast (and the recognisable actors) in the opening 15 minutes? It’s such a daring opening it leaves a whiff of peril over everything else – even after we discover some people weren’t actually killed, and despite no other characters dying apart from the baddies.

Killing off the team does mean the film is a bit more “Tom Cruise with some back-up” rather than a team effort – but that doesn’t really matter does it? Wee Tom of course does all his own stunts and looks cracking. Acting wise, he’s “cruising” through his standard turn as a cocky protegee who goes through a steep learning curve. But it doesn’t really matter, because he looks great and everything he does is pretty damn cool. He even manages to mine some real emotional pain when he realise some of the people closest to him have betrayed him.

The film’s centre piece, that famous spiderlike descent from the roof to break into a sealed computer room in Langley, is probably most responsible for making this film a hit. How many times has that scene been spoofed? It carries more impact than the big top-of-the-train scene that ends the film, because we immediately understand the difficulty of what Hunt is trying to do. How many times have we had to balance, played a game where you couldn’t step on something, had to be as quiet as possible, or keep as calm as you can? I’ve never had to balance on top of a speeding train, but I’ve had to do all that stuff. Everyone watching it can relate to the tension of doing this stuff. It’s a little masterpiece scene that owes a fair deal to Riffi’s silent robbery scene.

The scene also shows what a triumph of style this is. De Palma directs with a breezy lightness and love for the business of spycraft (I suspect he was taking the money big time, as he injects very little of his personality into it, but it works and he has an eye for the memorable shot), Tom Cruise is pretty damn cool. The film understands the simplicity of iconic shots – Cruise jumping away from an exploding aquarium in a restaurant is a simple stunt, but it looks great. The film has a great range of small-scale spycraft as well – from Cruise cracking a bulb and sprinkling the glass outside a door as an early warning detector, to him carefully timing how long to stay on a phone call to allow a trace to go so far.

Of course, some things in the plot make very little sense. The traitor seems rather randomly motivated (he’s basically pissed off at the end of the Cold War, despite earning way more than the average joe and being married to an impossibly attractive younger wife) and his effectiveness and smartness fluctuates according to the demands of the plot (Bond villain-like, he inexplicably leaves Hunt alive at one point for no reason). The idea of a government organisation where missions can be chosen to be accepted or not is in itself rather silly. The use of the internet and e-mail in the film looks hilariously dated today (Hunt basically sends a series of random e-mails to made up addresses – Max@Job314 indeed…).

To be honest, its breakneck pace is probably why some people struggle to keep up with what’s going on, but generally I wouldn’t let it bother you. It helps as well that there is a terrific cast of interesting actors – one of the great strengths of this series has always been its unconventional casting decisions. Would anyone else have thought of Béart and Scott Thomas as secret agents? Each actor has the skill and confidence to invest often paper-thin characters with depth – Rhames plays Luther so well, he stuck around for the rest of the series, despite us learning very little about him here. Voight has a perfect world-weary fixedness as Phelps, Reno is great value as a sociopathic hired gun and Redgrave has a lot of a fun as a cut-glass arms dealer.

Mission: Impossible is, to be frank, tons of fun. It’s basically a simple film disguising itself as a complex one, but it’s rewarding enough that you enjoy working out the plot alongside Hunt. It treats the viewer with a certain rewarding confidence and it’s crammed with distinctive and iconic shots. Is it any wonder Cruise saddled up five more times (and counting) and chose to accept the mission again?
Email ThisBlogThis!Share to TwitterShare to FacebookShare to Pinterest
Labels: 1996, Action Films, Brian de Palma, Emmanuelle Béart, Henry Czerny, Jean Reno, Jon Voight, Kristin Scott Thomas, Mission Impossible, Spy thrillers, Tom Cruise, Vanessa Redgrave, Ving Rhames