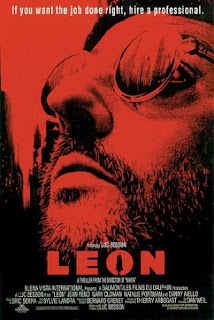 Luc Besson is an interesting film-maker, part visionary, part pulpy stylist. He has undeniable talent and visual flair, but far too often wastes this on trashy and juvenile comic book films, with a teenager’s preoccupations rather than a focus on story and character. One of the few exceptions to this is Leon, a film that marries his vibrancy with a heartfelt story.

Leon (Jean Reno) is a professional hitman working in New York, a dedicated professional with the stunted emotional maturity of a young teenager. One day the family of his next door neighbour is ruthlessly slaughtered by demented, drug-dealing cop Norman Stansfield (Gary Oldman), leaving only precocious 12-year Mathilda (Natalie Portman) alive. Despite his concerns about involving himself in the world, Leon takes Mathilda in – and these two outcasts develop a deep emotional bond, part mentor-pupil, part father-daughter, part celibately romantic.

In many ways, Leon should be an uncomfortable viewing experience. It’s a film that explores the growing emotional and sexual awakening of two characters, one of whom is a 12 year old girl, the other a hitman in his 40s. In fact it’s hard to imagine it even being made today by a Hollywood studio (it was controversial enough at the time). However, it works because the characters are so skilfully established. The 12 year old is precociously mature emotionally and sexually for her age, the man is so emotionally stunted and childlike in his outlook on the world he effectively feels like a 14 year old. The sexual interest is all from the girl, and is constantly batted gently aside (with a confused lack of understanding) by an adult who doesn’t understand the adult world and its feelings. As such, the film manages to side-step the creep factor and turn itself into a sort of touching fable.

It further works because our two leads give such terrific performances. Jean Reno perfectly understands Leon’s childish appreciation of the world, his touching faith in other people (his father-figure Tony is clearly swindling him), his simple delight in things (his wide-eyed appreciation of Singin’ in the Rain is very endearing). He’s naïve and has a child’s lack of understanding of violence and its impact. He’s focused so tightly on his narrow world, he’s clearly never developed any real emotional understanding of the wider world. Reno creates a character who is a seasoned killer who feels like a under developed teenager – emotionally and sexually he’s pretty close to being a 12 year old himself. His interest in Mathilda is rooted more in an elder brother/sister relationship. You get the feeling sex has never even really entered his mental equation. It’s a masterful performance, effortlessly cool but also stirringly real, sweet, vulnerable.

Equally brilliant is Natalie Portman’s enthralling performance as Mathilda. She creates a character who is sexually daring, seemingly far more adult and savvy than Leon in many ways, but is still recognisably a vulnerable child. She’s spiky and defiant, but this hides a deep rooted sensitivity and a desperation for love and affection. Her continued expression of sexual interest in Leon is as much rooted in a desire to feel part of a genuine caring family unit as it is some desire to initiate sexual contact. Her performance is perfectly nuanced and searingly real. Portman also feels both simultaneously adult and childish, so she never feels as out of place. 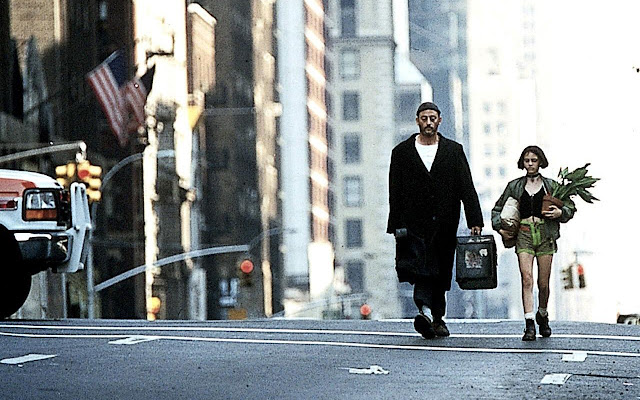 The film also works because it feels like a slightly unworldly drama. The rules of this world seem slightly fairy-tale like. It happens in a dreamy New York, with shady gangster chiefs, corrupt cops and hitmen moving serenely from location to location, with seemingly no intrusion of “real” people into this equation. The world seems oddly off-kilter, a self-contained fantasy where Leon is some sort of gentle ogre and Mathilda an Alice in Wonderland. While it’s set in a real place, Besson’s film feels like a sort of violent bedtime story. It becomes harder for sex in this context to seem threatening.

Instead, despite the killing and slaughter, this is a sweet and even slightly sentimental love story, about two souls who have an inherent understanding of each other. It’s a deep bond that transcends their ages and social conventions. Besson really understands this, and it’s what motivates and powers the film. They switch roles between child and adult smoothly: So one moment Leon is almost fatherly, teaching the basics of sniper work to Mathilda, the next she teaches him to read. There are undertones of sexuality, but the feeling is that neither of these characters really understands the complexities and realities of sex, because one is too young and the other is too emotionally immature.

Besson’s film making around this is sublime. The film is stylish beyond belief, the camera and editing fluid and dynamic. Action scenes hum with tension and excitement. The violent confrontations (of which there are many) are brilliantly done. Besson draws extraordinary, heartfelt performances from the two leads and creates a wonderfully moving fantasy-tinged world. His invention and pulp style brings a unique feel to what is a heartfelt, rather tender story. It’s a perfect marriage of style and content, where both complement each other. The story feels heartfelt, the execution gives it a swaggering extra dimension.

The tender reality of Reno’s and Portman’s performances – and the marvellous gentleness which Besson films this with – allows other parts of the film to go fully over-the-top. This is not least the case with Gary Oldman’s ramped-up-to-eleven Stansfield, a Grade A nutter. Oldman leaves nothing in the dressing room here, completely letting rip. In a way a performance of such utterly demented excessiveness should be absurd. But with the other performances feeling so genuine, and Besson’s fairy-tale styling, means Oldman feels a perfect part of this world, the dark monstrous heart of a corrupted land. In any other context it wouldn’t work, but here it really does.

Leon is a very tender, exciting and emotionally moving film – a great example of stylish film making married to a genuinely moving storyline between two people who feel like realistic, three dimensional characters. Both the style and the heart of the story complement each other perfectly. It’s a terrific piece of film making, with three performances at the heart each on their own way a stand-out. It must surely be Luc Besson’s finest ever film – and a height he’s very rarely ever reached again.
Email ThisBlogThis!Share to TwitterShare to FacebookShare to Pinterest
Labels: 1994, Crime drama, Danny Aiello, Gary Oldman, Jean Reno, Luc Besson, Michael Badalucco, Natalie Portman, Thrillers