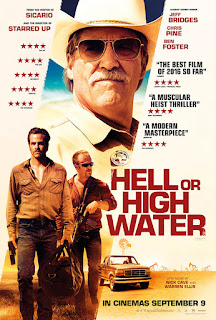 In West Texas, two brothers – divorced father Toby Howard (Chris Pine) and his ex-con brother Tanner (Ben Foster) – carry out a series of early morning raids on branches of the Texas Midlands Bank. Their robberies are investigated by Texas Ranger Marcus Hamilton (Jeff Bridges) working his last case before retirement, and his partner Alberto Parker (Gil Birmingham). The brothers however are motivated by more than just a desire for money – and these motivations drive them to ever more desperate and dangerous actions.

Hell or High Water is a fine piece of skilled professional film-making. The story is tightly scripted, and Mackenzie’s direction marries up a modern outlook with the style of a classic John Ford western. But, for me, it reaches for a thematic richness that isn’t quite there. It’s in the same territory as No Country for Old Men but it never achieves that film’s complexity. It creates characters we care about, and the story keeps us gripped, but it lacks that certain extra dimension that profoundly moves us. It tries to tell itself (and us) that it’s a profound exploration of themes around life and death, but it never really reaches these feelings – its grasp is less than its reach.

But it’s still a hugely enjoyable and impressive movie. Mackenzie’s direction is superb, detailed and smooth, and he is able to bring to life both the drama and the action. The story has an old school heist quality, with our gangsters sort of proto-Robin Hoods, naïve enough for us to invest in their actions, but dangerous enough for us to understand why events spin outside their control. Sheridan’s script is full of punchy lines and genuine emotional weight. The plot line gets a bit bogged down in the ins and outs of the reasons why our ‘heroes’ are doing what they are doing, but there is an emotional truth to it that really works.

The film also creates a wonderful sense of Texas as a land that seems to have only just moved on from the Wild West. Everyone in the film seems to be either packing heat or wearing a Stetson (or both). Genuine cowboys guide cattle across a road. The rangers have an old school gruffness about them, staking out banks from across the road in saloon bars that don’t seem to have moved on from the days of Wyatt Earp. At the slightest sign of danger, ordinary people reach for their guns and start shooting. Everything takes place in dusty countries, or rural feeling towns. I can barely remember seeing a computer or mobile phone. The whole film feels slightly out of step with the modern world.

It also draws some very fine performances from its actors. Chris Pine may never have been better than as reluctant bank robber Toby. Toby is a classic western outsider, a man who is working to protect his family and preserve their future – often by dangerous means – but accepts that this family life he is building has no place for him in it. Pine brings the part a finely judged sadness, a sense of a man without a place in the world. Ben Foster is equally good as his firecracker brother, a damaged anarchist at heart whose love of impulsive danger will have fatal consequences. 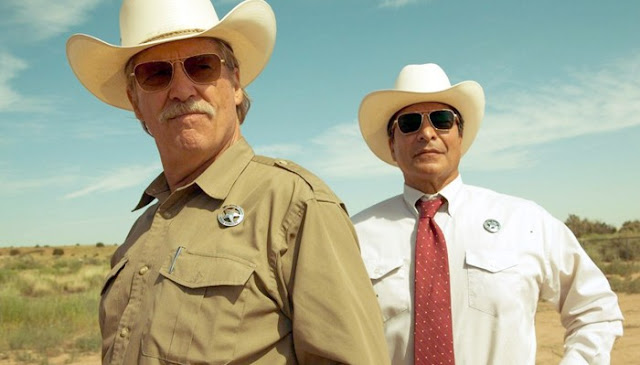 The heart of the movie though is Jeff Bridges’ ranger, a marvellous portrait of gruff-old school machismo. Bridges invests this role throughout with a humane decency, an anger at the distress and violence. His friendship with his partner Alberto (a touching Gil Birmingham) provides much of the affectionate heart of the movie, their good natured joshing and banter a continual source of humour. Bridges’ world-weary, out-of-time quality matches perfectly with the timeless mood of the movie. It's a beautifully judged, simple, unshowy performance.

It’s a beautifully judged combination of crime and family thriller, while its ability to balance the old-school feeling and aesthetic of West Texas with a punchy modern-feeling tale of the greed of bankers, works extremely well. It’s got a dark Butch Cassidy feeling to it, and the film’s focus is tightly kept on the four leads, allowing the audiences understanding of them to grow and develop. By the conclusion of the film, your loyalties will be firmly divided between both the law and robbers, summed up best by a beautifully played elegiac final scene, laced with regret, sadness and tension.

But despite all this, it never quite breaks out of its pulpy roots to become something else in the way that No Country for Old Men manages to do. Wonderful character study as it is, it feels like a film that wants to make a broader, spiritual comment about the American way and modern masculinity. It doesn’t quite manage to do this. I don’t feel that this film really succeeds in suggesting it is about much more than what’s on the surface.

But that doesn’t matter so much, when the surface is so strong and as well directed, acted and written as this. If Hell or High Water is, at the end of the day, just a smart cops-and-robbers story, it’s certainly one that’s full of freshness and intelligence and grips your interest from start to finish. In a world where Hollywood churns out over-promoted average films, it stands out as something far more heartfelt, expertly crafted and hugely enjoyable.
Email ThisBlogThis!Share to TwitterShare to FacebookShare to Pinterest
Labels: 2016, Ben Foster, Chris Pine, Crime drama, David Mackenzie, Jeff Bridges, Thrillers, Westerns