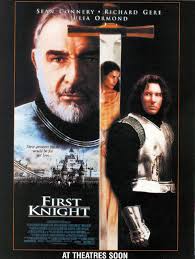 First Knight continues a proud tradition of Hollywood adaptations of British legends, with full-blown action and romance mixed with an anachronistic modern-ish vibe which clashes completely with the design of the rest of the film. Think anything from Ivanhoe to Robin Hood: Prince of Thieves. At heart these films are ridiculous, but to be a success they need to embrace this and create something with a bit of heart. First Knight is almost wholly absurd from start to finish – but it’s still remarkably good fun. Even when you laugh at the bizarre sequences that pepper the film, it’s still somehow entertaining. It doesn’t take itself seriously – so I feel people who lambast it are missing the point.

Anyway, it retreads the story of King Arthur (Sean Connery) with a modern mix. Here Arthur is an old man, marrying Guinevere (Julia Ormond) to seal a truce between Camelot and Guinevere’s home of Lyonesse. While being escorted to Camelot, an attempt is made by the villainous Malagant (Ben Cross) to kidnap Guinevere, but she is saved by charismatic chancer and expert swordsman Lancelot (Richard Gere). Returning to Camelot, she marries Arthur while Lancelot finds himself inducted into the Knights of Camelot. But their adventure together has led to a deep romantic bond between Lancelot and Guinevere – one that threatens to tear apart the harmony of Camelot. 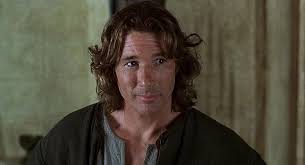 Something stupid or horrendously anachronistic happens in every scene of First Knight. Many of these moments are thanks to Richard Gere. Gere is at his most smirky here as Lancelot, an American Gigolo in King Arthur’s Court. There are few more modern actors than Gere – so seeing him in armour and cod-medieval garb jumps straight out as completely incongruous. Rather like Costner in Robin Hood, he makes no concessions to period whatsoever, and behaves more or less as he does in Pretty Woman. Every event in the film is met with his trademarked smirk-cum-grin and a twinkle in his eye. And while he clearly spent a lot of time on his sword work for this film, you literally never forget you are watching Julia Robert’s sugar daddy pretend to be a knight.

But then why should be really have made an effort to adjust his manner, accent or style for this film? After all this is a film where Lancelot takes part in a Total Wipeout competition – and on the basis of his performance in it is basically offered a spot at the round table. As a travelling entertainer, Lancelot woos the crowd with the sort of patter not out of place on a New York street corner. Later, the baddies hook up a boat with a pulley system that turns it into a super-fast speedboat. The baddies are all armed with pistol sized cross bows. It’s the sort of film where the lead villain rides into Camelot and shouts “Nobody move! Or Arthur DIES!”. Anyone watching this expecting a faithful exploration of Thomas Mallory seriously needs to change the channel.

So instead embrace the film for what it is. And enjoy the production values! The music score is swellingly impressive (now hugely familiar to any fans of Sky’s Ryder Cup coverage). The Camelot location looks brilliant. The costumes are wonderful – even if the knight’s armour (basically little more than a shield on the shoulder) looks horrendously inefficient. There is a very effective night-time battle excitingly filmed. The photography looks luscious. It’s shot with an old school, chocolate box, romance that makes everything look like a grand renaissance painting. The final battle between Malagrant and Lancelot is terrific.

I’ve also got to say that it offers an actually fairly interesting role to Sean Connery as Arthur. Considering that four years after this film he made Entrapment, a film in which he boffed Catherine Zeta-Jones, in a way it’s fairly daring for him to make a film that puts so much prominence on his age making him an unsuitable lover for Guinevere. His age is prominent in every scene (especially when counter poised with the modern vibrance of Gere). Half the time he’s with Guinevere he reminds her that he knew her as a child (yuck). He takes no part in any of the action – it’s Lancelot who (twice) rescue Guinevere, while Arthur commands from the rear. His relationship with Guinevere is almost devoid of sex and passion (they share only one remotely passionate snog). He even plays the poor cuckold, the man unable to excite his wife. Has Connery ever played such an unflattering part? 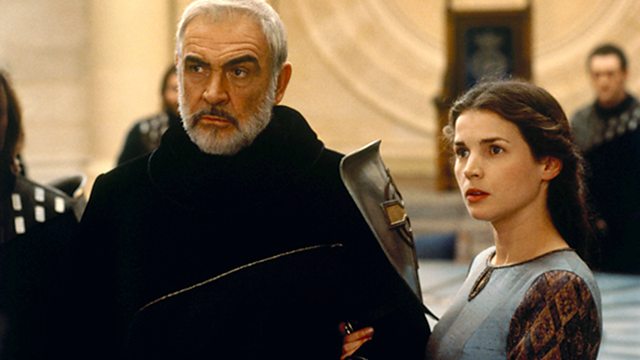 Julia Ormond – an actress who achieved a certain run of prominent roles in the 1990s – plays Guinevere. Despite the fact she seems to frequently find herself in distress, Ormond does manage to make Guinevere not feel like a damsel in distress. She’s proactive, she saves others, she’s defiant and (by and large) she knows what she wants and tries to get it. She also is an effective leader of her people. Ormond is also a fine, generous actress – she manages to convey a lot of chemistry with both Gere and Connery, two actors very different in style.

The film remains charged through with silliness. Ben Cross’ snarling villain has big speeches about how he wishes to escape from “the tyranny of Arthur’s Law”. The LAW is a major theme throughout the film – the characters bang on about it with an earnest insistence. Arthur falls back on it to make sense of his life. Lancelot struggles to understand and embrace the values it brings. Guinevere is determined to match law and duty together. Sure there are some silly grandstanding speeches about it – and the film runs with gleeful pride of Camelot as some sort of Socialist Utopia – but I suppose there’s a kernel of an idea at the centre here about justice and its importance in the world. It might mean we get a scene where Camelot is left totally undefended while everyone gathers for an open trial of Guinevere (guess what happens!), but at least it’s got an idea.

Of course that doesn’t get in the way of the silliness, the high blown acting, the silly events and the overblown dialogue. The heroes are all clean cut, and chiselled of jaw with perfect teeth, the villains all dressed in black, forever scowling and rugged of shave. It never for one minute feels remotely like it is happening in a truly medieval world. Richard Gere is, frankly, completely wrong as a medieval knight. But he’s strangely completely right for a film that is a chocolate box entertainment, a soufflé of a romance with swords and passion, that provides a few stirring moments and an interestingly different part for Connery. Gere is a perfect measure for the film – it’s a silly entertainment for those with an affection for Mills and Boon not Henry V. And there’s nothing wrong with that – it knows what it is, and knows what it wants to be taken as. Enjoy it. After all Camelot Lives!
Email ThisBlogThis!Share to TwitterShare to FacebookShare to Pinterest
Labels: 1995, Ben Cross, Fantasy, Jerry Zucker, John Gielgud, Julia Ormond, King Arthur, Liam Cunningham, Richard Gere, Sean Connery