SPOILERS: It’s pretty much impossible to discuss Blade Runner 2049 without revealing some of the workings of the plot. Since the film makers have gone out of the way to say “don’t reveal any of the plot” I thought it fair to say I’ll discuss some things fairly freely here. So you’ve been warned! 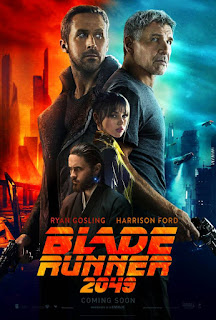 Making a sequel is a risky business at the best of times. Then imagine making a sequel to a film that is not just a cultural and artistic landmark film but one people genuinely love. The possibility of creating a massive disappointment? Pretty big. You need some guts to take that on – like announcing you are making Gone with the Wind: Blown Away or Casablanca: Everyone Back to Rick’s. That’s the sort of challenge for the makers of the long-awaited Blade Runner sequel. Could they make something that both complemented and expanded on the original?

The year is 2049 (of course!). K (Ryan Gosling) is a Blade Runner with the task of hunting down long-lived Nexus-8 replicants – the twist being (and its revealed in the opening minutes of the film!) that K himself is a replicant, a more obedient Nexus-9 model. After “retiring” aged replicant farmer Sapper Morton (a career best Dave Bautista), K locates the buried remains of a female replicant who died after an emergency caesarean section. Terrified that replicants may be developing the ability to reproduce, K’s superiors order him to “retire” the child and all who know of it. As K investigates, his loyalties become ever more divided – while sinister corporate genius Niander Wallace (Jared Leto) and his Nexus-9 hit-woman Luv (Sylvia Hoeks) have their own plans for the replicant child.

So the big question is, does Blade Runner 2049 succeed? The answer is a firm and reassuring yes. The big issue is, does the existence of this film affect (or even ruin) the previous film? Blade Runner 2049 not only complements the original, it builds on and expands its themes, and poses far more questions than answers. In some ways it’s even more profound and searching than the original – arguably it engages with ideas and concepts even more overtly (and richly). If your concern going into this film was it would end any discussion about whether Deckard is a replicant or not, then have no fears – the question remains as open as ever (and works either way for this story).

Even more than the original, this film tackles what it means to be human and how we define humanity by the ability to express emotions and empathy. It comes at this from a different stand-point from Blade Runner by removing any doubt about our hero’s nature. What is more, he is a replicant deliberately designed to be more obedient than earlier models. A cool, minimalist actor with a mastery of small expressions, Ryan Gosling is almost perfectly cast as the quiet K, developing deep yearnings to be more than what he is. The entire film revolves around this question of how capable K is not only of forming emotions, but of making his own choices. 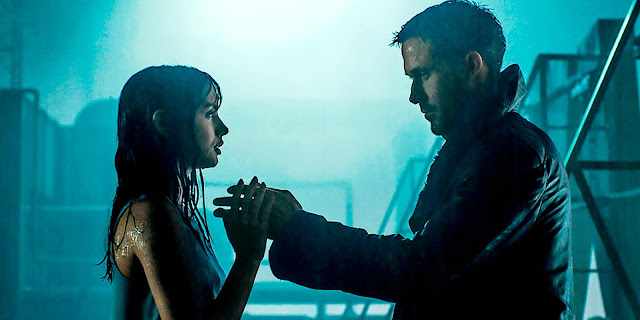 The ability to live freely and choose is at the heart of the conundrums for all our characters. To what extent are they able to do this? K goes about his work of dispatching fellow replicants with a quiet reluctance, but does his duty nevertheless. But he is a character yearning to be “more” – and what, in many ways, is more human than that? The film taps into this expertly with K’s belief that maybe he himself is replicant child. The film’s mantra is about choosing what we live and what we die for and, regardless of who or what we are, being able to do this is what makes us “more”.

In a film stuffed to the gills with replicants and other artificial characters, we are constantly asked to address and question how far each of them goes towards achieving “humanity”. Just as with Blade Runner, the only two definitely human characters (Niander Wallace and Lt Joshi) are strangely distant, hard to read or even cruel authoritarian figures, making a damn bad case for real humans.

Joi (brilliantly played by Ana de Armas), K’s girlfriend, is a warm, caring, loving woman – but she’s also a hologram, designed to be the perfect companion. K and she go to great lengths to protect and care for each other over the film – and her final fate is a deeply moving moment. But Joi is a computer programme – and a late sequence in the film where K interacts sadly with a looming holographic advert of another Joi that repeats many of her phrases in a disconnected style casts a sad light on all their previous interactions. Every time Joi said anything with love or affection to K, was this just a computer reflecting back what her owner wanted to hear?

It’s not a great surprise to say K does eventually learn to make his own choices and to decide his own fate. In many ways this is a fable of growing up – K accepting his limitations while forging his own destiny – but it makes a contrast with other replicants. While the older models form their own resistance, K’s counterpart Luv (an imposing Sylvia Huks) can’t or won’t break free of following Wallace’s commands. There are more than a few hints Luv is not always happy with the duties she is asked to perform (at one point she weeps quietly as a replicant is dispatched). But at others, she’s clearly striving as much as K to be “special” – she triumphantly repeats a mantra to herself about being the best, like a daughter trying to impress her father.

These new characters offer such diverse and exciting story-telling opportunities, you almost don’t notice that Deckard doesn’t appear in the film until nearly the third act. Harrison Ford may have been slightly uncomfortable in the original – but he fully understands the more assured, confident Deckard in this film, who has made his peace with leaving the world behind. Ford gives this new Deckard an almost Han Solo-ish shoot-first swagger, but mixes it with a world-weary sadness. I’d go so far as to say he’s actually better in this film than the first one.

Which is a further testament to the strength of this film. All the themes and ideas of the original are used as bouncing-off points for further exploration. This never feels like a retread, reboot or remake – it feels like a rich and rewarding piece of intelligent sci-fi by itself. I actually feel it could be watched independently of the first film, and still have plenty to offer. It’s not interesting in tying the first film up in a bow – instead it serves as a stimulus for future discussion. You could imagine a sequel to this film sustaining enough interest for 35 years. 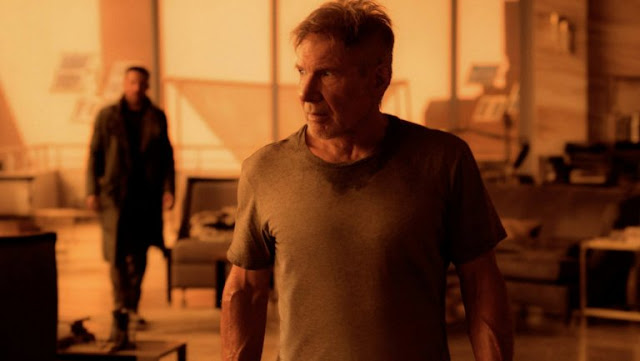 Technically of course the film is an absolute marvel. Roger Deakins’ photography is gorgeous, capturing every element of this dystopian nightmare world in a series of brilliant images, in turns drained, bleached and sun kissed. Every frame is artfully composed for maximum impact. The production design is similarly magnificent, Dennis Gassner’s work melding the world of the original, with its steam-punk look, with a mix of technological developments. The score by Hans Zimmer and Benjamin Wallfisch is similarly perfect, giving the film a brooding intensity.

But most of this artistry comes back to the film-making mastery of Denis Villeneuve, a director so gifted I think he may be more interesting than Ridley Scott. His control of the pace of the film is brilliant – despite being very long, it never drags – and he shoots every scene with a careful, intellectually engaged brilliance. He is able – possibly even more than the original – to mix emotion and elliptical theorising, and to draw a raft of brilliant performances from an outstanding cast. More than anything else, he treats the audience with respect, giving them a measured and thoughtful film that trusts we have patience. Villeneuve tops Arrival here, and does so with confident aplomb.

Blade Runner 2049 is a film that demands to be seen more than once. It’s a patient and intensely thoughtful piece of science fiction, that asks profound questions about humanity and the characters in it. I don’t really feel from one viewing I’ve got a grip on it – in fact the more I think about it, the more its haunting, elegiac quality starts cramming into my head. You need to be patient and go with it – you need to be in the right mindset for this slowburn concept film. But, get in that mindset and this film is constantly rewarding. If you want to criticise something, I will acknowledge that many of the female characters are a little more clichéd (most are prostitutes or similar) – but this world where many women seem to be in subservient roles to men is in many ways an extension of the world created in the original film (and now an expression of the dystopian future).

However this is a great film. A really great piece of adult science-fiction. I’ll go out on a limb and suggest it may even (with repeated viewings) have the legs to match the original.