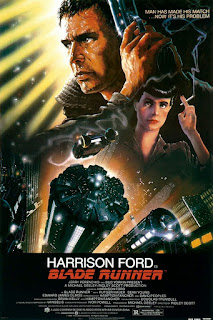 Everyone knows Blade Runner surely? And everyone has a viewpoint on its central mysteries. Why for a film largely ignored on release? Because as well as being tight and engaging, this is a rich thematic film, crammed with mystery and enigma. And there are few things more engaging than a film that succeeds in being as open to interpretation as possible.

In 2019 a dystopian, polluted Los Angeles is a launch pad for the wealthy to head out into the new colonies in the stars. Off-world, the unpleasant tasks are carried out by artificial humans known as replicants. Replicants are banned from returning to Earth – but a group of five led by soldier Roy Batty (Rutger Hauer) have come to Earth looking to extend their pre-programmed limited lifespans (no more than five years). On Earth, Rick Deckard (Harrison Ford) is reinstated as a Blade Runner, an agent whose job is to ‘retire’ (i.e. kill) replicants on Earth. Deckard is reluctant, having an increasing distaste for his work, but begins to hunt and eliminate the replicants.

Blade Runner may be one of the most influential science fiction films ever made. Its look and style influenced virtually every other dystopian future you’ve seen in any other film since. Tall, run-down buildings. Overbearing corporate advertising. Flashing neon lights. Terrible weather. Everything dark all the time. Poverty and degeneracy on every corner. You’ve seen it in every dystopian future since. Visually, the film is a landmark, a testament to Ridley Scott’s graphic artistry.

But that wouldn’t be enough for Blade Runner to last the course. When released it was perhaps too elliptical and hard to categorise – equal parts dystopian thriller, noir detective story, sci-fi morality tale, dark romance – for audiences to really understand. Certainly the studio didn’t. After disastrous test screenings, it was re-cut. So began a fable of slice and dice that made Blade Runner perhaps second only to Brazil in the annals of re-versioned films.

The release included an overtly “happy ending” (bizarre images of our heroes driving into a blissful countryside, totally at odds with the rest of the film) and a disengaged voiceover from Harrison Ford that eradicated all the film’s subtlety. This was the only version for 10 years until a “Director’s cut” was released. This removed these elements, retooled scenes and introduced the famous “unicorn dream” sequence (of which more later). Fifteen years after that, Scott finally found the time to work on a “Final cut” which presented the film as Scott had intended it – with all its mysteries and questions intact. Has there been any other film with so many different “official” versions?

Anyway, was it worth the struggle? Certainly. While you could argue it is predominantly a triumph of style, Scott laces the film with a sense of mystery and profundity that makes it a rich and rewarding viewing experience. It’s a trim detective thriller that also questions the nature of humanity. It is a perfectly formed elliptical mystery, an archetypal cult film that engrosses the viewers to such an extent that 30 years later there is still a healthy debate about what the film means.

Humanity is =the key issue. The human characters are functional, cold, distant and unengaging. The hunt for the replicants (who are basically slaves) is brutally and unremorsefully executed. The replicants have been designed to learn and grow but cruelly had their lives capped to stop them taking advantage of this. Their world is polluted, tawdry, soulless and lost.

Meanwhile, the replicants exhibit far more (whisper it) humanity than the aloof human characters, ]despite the fact we are repeatedly reminded they cannot feel empathy. Clearly this is not completely true. And, the film argues, if an artificial human can display loyalty, fear, love, anger and pain, what actually is the difference between that and a “real” person. If a replicant can only be identified after dozens of questions in a test, can they really be that different from a human being?

Questions about this coalesce around Deckard. If the film has remained such a part of cultural discussions, it’s partly because of the fun of theorising about his true nature. Is he a replicant? Scott’s insertion of Deckard’s unicorn dream (implying the origami unicorn left by Gaff at the film’s end shows Gaff knows Deckard’s dream, meaning the dream is an implant in an artificial mind) very much suggests so. There is a case to be made either way, both of which work.

Deckard’s ruthless replicant hunt is deliberately juxtaposed with their own warm feelings. Deckard grows in humanity and reluctance as the film progresses – is this him becoming more human, or is it is humanity emerging? His coldness and reserved hostility contrast with the vibrancy of Batty, Pris and the replicants. In many ways, he fits in as the quintessential human in this world – a vague discomfort with what he is doing, but no real hesitation about continuing. Thematically, it makes more sense if Deckard is human – that he represents dehumanisation (and gradually realising it) while the replicants become more human.

However, clues are sprinkled throughout that Deckard is not what he appears. His distance from other characters. The treatment he receives from his co-workers. The photographs that fill his apartment (replicants enjoy photos as it gives them a sense of a past). His bond with Rachael. His relentlessness – and the fact that he is clearly considered expendable by the police. Then there is the rich irony: the best way of hunting down replicants is to create a hunter replicant. Either way, it’s a debate and conversation that sustains the film – and allows multiple interpretations of every scene.

It’s a debate that feeds into the main theme of the film: humanity, free will and our God complex. Batty, the dying replicant searching for new life, confronts his maker – a distant, arrogant man with no interest in his creation. And kills him. But Batty feels more human than any other character. He shows more affection, frustration, anger and grief than anyone else. His last words (the famous “tears in rain” speech) had such cultural impact because it has such poetic joy and depth to it. They are lines enthused with a desire to live, a romantic vitality. It’s the most poetic moment in the film and it comes from someone who isn’t “real”. What more sign do we need that the replicants are human? If we can create poetry in a machine, does it stop being a machine?

Empathy is the quality the replicants are judged on – but as we see replicants dispatched with little sense of regret, and then witness Batty and Leon’s grief for their fallen comrades, or Pris’ ease with man-child Sebastian, the lack of empathy from humans is all the more clear. Deckard is a fascinating character as he falls between two stools – either a human who has buried empathy, or a replicant discovering empathy. Strange and disjointed as the relationship between Deckard and Rachel is (and there is an uncomfortable moment where Deckard gets too physically forceful) it fits into this – are these two artificial people discovering the ability to bond? Or is it an emotionally stunted human finding himself drawn towards someone who feels more real than the other humans?

What makes the film work is that it doesn’t hammer home, these issues. It allows us to make our own minds up. It frames the action within a noirish detective thriller, laced with mood and awesome visuals. It’s sharply and sparingly written, with real intelligence. For all its discussions about humanity, it does feel at times a cold film – but it’s so rich in suggestion and implication that it doesn’t really matter. Yes you could argue the implication and playful suggestion imply more depth than actually exists, – but the film gets away with it, because it works so well.

Rutger Hauer gives easily the finest performance as Batty (he allegedly wrote the famous speech on the day). Batty is the most vibrant and dominant force in the film, who goes on the most engaging emotional arc. For me the dark secret of the film is Harrison Ford is slightly miscast– he’s aiming for moody, Bogartish disillusionment, but he comes across more disengaged (he’s strikingly better in Blade Runner 2049). I think Ford struggled with the character – it’s a role better suited to a John Hurt or James Caan, rather than Ford’s more conventional (if world-weary) magnetism – he’s not a natural fit for a bitter cynic. Olmos, Cassidy, Walsh, Sanderson and James give strong support.

Blade Runner is a visual triumph and a rich experience. Its story is compelling, but the real richness is the thematic layers under its skin. Scott created a film open to interpretation, and that’s what really grabbed the imagination. It marries mystery with curiosity and avoids pretension, becoming intriguing and engrossing. Scott has rarely made a film with such intense ideas and poignant confusion before. You could argue the final cut leans too far one way in the central mystery, but there is more than enough eerie richness under that – helped by Vangelis’ unsettlingly grand score – to keep people viewing and talking about it for another 30 years.
Email ThisBlogThis!Share to TwitterShare to FacebookShare to Pinterest
Labels: 1982, Daryl Hannah, Dystopia, Edward James Olmos, Film noir, Harrison Ford, Joanna Cassidy, M. Emmett Walsh, Ridley Scott, Rutger Hauer, Science fiction, Sean Young, Thrillers