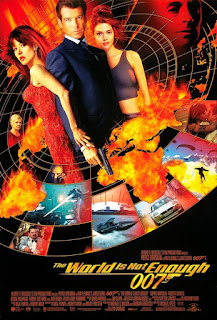 I’ve long been of the belief that Pierce Brosnan’s Bonds were each a decline from the last, no matter how much money and action were thrown at the screen. TWINE in no way shakes that opinion. It’s a film I remember when I saw it in the cinema twenty years ago being a little, well, disappointed by.

After the assassination of an oil tycoon in MI6 headquarters, James Bond (Pierce Brosnan) is assigned to protect his daughter Elektra (Sophie Marceau) as she vows to complete the pipeline her father started. MI6 believes her life is endangered by her former kidnapper Renard (Robert Carlyle). Heading to Eastern Europe, Bond soon finds himself in the middle of a complex game, with a mysterious string puller, that seems to revolve around the stealing of a nuclear warhead and the kidnap of M (Judi Dench), with only nuclear scientist Dr. Christmas Jones (Denise Richards) to help.

TWINE is all about its electrifying opening sequence. It’s possibly the biggest, most exciting introduction to a Bond movie yet. Not only does it have a truly compelling action sequence in the boat chase down the Thames, but there’s plenty of plot, tension, mystery, revelation and humour – Bond straightens his tie under water – to match the entire content of some Bond capers. Brosnan is deadly in the Bilbao sequence – you believe he’s a killer – he’s working out of the money trap is Bond at his most ingenious and the beautifully filmed and edited boat chase is an absolute wonder. It’s edge of the seat stuff and when it finishes, you can just imagine a cinema full of people letting out a sigh of relief and kicking back to enjoy the rest of the film.

In fact that’s part of the problem. As Anthony Lane said in his review of the film “It’s the best 15 minutes in film this year. Let’s pack up and go home”. The problem is literally nothing in the film that follows can even hope to live up to this – and by the end, it’s practically given up trying. How does a film that started so vibrantly end with such a hackneyed fight on a submarine, with our heroes squabbling over something so fiddily it looks like an ink cartridge?

In between the phenomenal start and the damp squib ending, the film pings off to a lot locations – Azerbaijan! Turkey! Bilbao! – but everywhere still has the same bland, identikit feel to it, for all the shots of the odd famous landmark. That’s not to mention the rather laborious plot that ties the film together. It’s a film that feels like it’s trying to make a series of big statements about our hidden selves, revenge, manipulation – but falls short each time. It’s wrapped inside the most elliptical villain scheme I can remember. I only watched it a few days ago and even I’m not sure why Elektra wanted to blow up that damn submarine in Turkey.

Increasingly it becomes bogged down in machinations that feel recycled from previous films in the series. Shady Russians, corrupt security guards, chases down the snowy mountains, fiddily endings in old style nuclear subs. The film’s second biggest set piece – the attack on a cavier factory – has a rather formulaic inevitability about it.

It has its moments of cool and charm, but in many ways it’s a blunt and crude film. What sort of eclectic film casting selects people as wildly diverse as Goldie and Ulrich Thomson as sidekicks? Robbie Coltrane returns as Zukovsky, but his character has been broadened from his first outing in GoldenEye into some sort of comic relief, a cane carrying buffoon a million miles from the ruthless ex-hitman in his first appearance. We even get a return of the “MI6 accidentally stumbles in on Bond doing the nasty” closing gag so beloved of the Roger Moore era. By the end of the film it really feels we’ve come a million miles from the ruthless efficiency and dynamic action it opened with.

The film’s most interesting beat, without a doubt, is Elektra King. It’s a stroke of inventiveness to turn the character established as the Bond girl, into the film’s villain.  Elektra uses many of the tropes of traditional Bond girls – vulnerability, sensuality, playfulness, a certain gutsiness – and repackages them as villainous tools, weapons of manipulation and deceit. Sophie Marceau is very good as possibly the most intriguing villain of the whole series, and the film neatly leaves open the question of how far her experiences twisted her, or whether her sociopathy was a deep lying trait. Her chemistry with Brosnan seems at times a little forced, but she gets most of the meaty content of the story and handles it with gusto. It’s especially neat to see how Marceau adjusts and adapts her performance for each person she encounters – with Reynard she’s playful and infatuated, with Bond she’s more aloofly sensual.

She certainly fares better than poor Denise Richards, playing a character who feels like she was written backwards from the film’s closing punchline (“I thought Christmas only comes once a year” indeed). As if the producers wanted to counterbalance the innovativeness of Elektra, Richards feels like she’s wandered in from a classic Moore film: nominally an expert in something grand sounding (nuclear physics – and you can have a £1 from me if you ever meet anyone who believes Denise Richards has a PhD in rocket science) but really a damsel in distress dressed in hot pants. I’d further add that Brosnan already looks far too old for her. 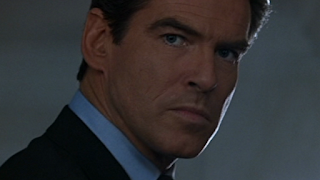 The film’s best asset though is Brosnan’s Bond. The more I rewatch Brosnan’s efforts, the more I feel sorry the guy didn’t get more of the sort of material Dalton and Craig received either side of him. He clearly has the acting chops to do something a bit more interesting with the character, but his Bond is always a bit tonally confused – one moment he will stare viciously at a fallen opponent, the next he’ll be wearing a shit-eating grin and perving over ladies’ underwear in a nightclub. Brosnan does both these things, I hasten to add, extremely well: this film is probably his peak action performance, and at several points (not least his first encounter with Reynard) his sense of physical danger is jaw dropping. TWINE is a kind of perfect embodiment of his era: 1/3rd Connery to 2/3rd Moore.

For all that the big picture of the film gets away from Apted, he does have a good eye for smaller moments that stick with you – the tie moment, Brosnan’s look into the camera after his first kill. Moments like this appear throughout the film: a cut back to Zukovsky’s grin when Bond’s car is destroyed, the pinpoint bullet shot that hits a plate of glass right in front of an unblinking Reynard. Moments like this get increasingly lost as the film pushes on and becomes more and more formulaic and traditional, but they are still there.

That’s what it all comes back to: the film is not the sum of its parts. Moments stand out, but the whole thing really doesn’t. Everything feels a little too pre-packaged. Even an actor as brilliant as Robert Carlyle (the sort of actor everyone said should play a Bond villain) is lost in the mix, his performance as forgettable as a million other “ruthless anarchist” types we’ve seen before. There are some neat homages – I like the painting of Bernard Lee in MI6 HQ – but too much of it feels like more of the same, told with a professionalism that crushes the life out of individualism. So while it has moments that excite and entertain, as well as elements (such as Elektra King) that feel unique and original, too much of it also feels like, well, any other Bond film. For all its energy, it feels like watching a world-class athlete run on the spot.

FINAL COMMENT: This film does get some credit however for how tastefully and wonderfully it handles the final scenes of Desmond Llewelyn as Q. Tragically Llewelyn died in a car crash shortly before the film was released, but his work here is possibly some of the best he contributed to the series. Never let them see you bleed and always have an escape route.
Email ThisBlogThis!Share to TwitterShare to FacebookShare to Pinterest
Labels: 1999, Action Films, Denise Richards, James Bond, John Cleese, Judi Dench, Pierce Brosnan, Robbie Coltrane, Robert Carlyle, Sophie Marceau, Spy thrillers, Ulrich Thomsen