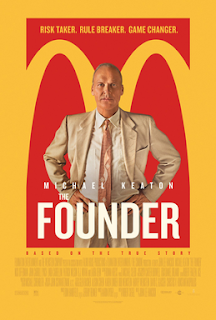 McDonalds. The Golden Arches are ubiquitous, not just in America but across the whole world. But how did this happen? How did a small business – just one stand in a small town in America – suddenly become a global monolith?

Ray Kroc (Michael Keaton) is a luckless travelling salesman, selling supplies to drive-in diners. In California he encounters a diner the likes of which he has never seen before: a walk-up restaurant serving high quality food in disposable packaging, instantly. The business is McDonalds, run by brothers Dick (Nick Offernan) and Maurice (John Carroll Lynch). Kroc instantly recognises the potential of the business, and strikes a deal to franchise the formula across America, although the McDonald brothers will maintain control over all changes. Kroc, however, has the drive and ambition the McDonald brothers lack – and he slowly begins to stretch and expand the deal, taking on more and more power. Eventually he will become “The Founder” of the business that bears his original partners’ names.

What’s interesting about The Founder is that it has a certain element of wanting to have its cake and eat it. It’s simultaneously a semi-celebration of American entrepreneurship and a condemnation of big business crushing the little guy. This sounds like it should make for a confusing film but actually it kinda works. It fits the complex world of major business successes – someone like Kroc had the skills and the ruthlessness to actually make McDonalds into a global super-company in a way the McDonald brothers never did. At the same time, Kroc is clearly incapable of creating anything himself (even most of his business-building ideas come from other people) and the McDonald brothers have the real “American” entrepreneurial invention to create something new.

So the film becomes an engaging story of how businesses grow and develop, which largely manages to remove Hollywood sentiment from the equation. Kroc isn’t exactly a hero – he’s selfish, ruthless and places himself first constantly – but he’s not exactly a villain either. He’s a downtrodden striver, who has too continually push to be accepted by those who look down on him. He has a sense of loyalty and love for his brand – even while he begins to shut the McDonald brothers out of their own business. Similarly the McDonald brothers have a homespun honesty to them, but they are also naïve and unrealistic in their demands and desires for the business.

The film relies a lot for its success on Keaton’s slightly tragic desperation in the lead role, his yearning to improve and better himself. The first half of the movie shows his charm but also demonstrates his business acumen, his genius in recognising that what the McDonald brothers have invented could work on a huge scale. He’s hard-working and initially luckless, and the snobbish knock-backs he receives from banks and investors when peddling an idea get us on his side – after all we know it’ll be worth billions. It’s a Capraesque spin: he’s the little guy bucking against the system who becomes the very monolithic monsterous system himself. We can’t even be certain where we see the flip.

What becomes clear is that Kroc himself is somehow empty, somehow slightly devoid of depth, a man able to move smoothly from concept to concept with no lingering sense of guilt. He discards the McDonald brothers (after copyrighting their name) with as much calmness as he drops his wife (Laura Dern, in a thankless part as The Loyal Wife). Despite this though, the film never brings itself to condemn Kroc. It's a little in love with the chutzpah of Kroc’s success and his persistent positivism, while seeing those he has had to drop on the way as tragic victims of the monolithic American business success Kroc has created.

We are invited to have similar sympathetic feelings about the hapless McDonald brothers: innocents in a world of business, able to create something that can change the world but hopelessly incapable of translating it into the type of scale that it could achieve. The film doesn’t forget that the McDonald brothers are the victims here, and Offerman and Lynch are both superb as two brothers with a deep personal bond and a love for their business and each other. But it also partly follows Kroc’s line – these two do not have the vision and ambition to take their idea to the next level. They are innovators but they are small-scale ones. The film daringly doesn’t just take their side as the little guys crushed by the system; it also allows itself to consider if they to a certain extent failed themselves. They never learn either, accepting Kroc’s handshake agreement for future royalties at the end of the film, an agreement we are all too aware even when it is happening will probably never be met.

The film has a certain love for the Americana of McDonalds and fast food joints, and it’s both an advert for the triumph of the business (the customers are all uniformly happy, and the ordinary employees in Kroc’s empire are all wonderfully warm) and a sad testament to the small businessman being swept aside by the big company. It’s quite a feat for the film to manage both at the same time and remain coherent. It’s both an advert for and attack on McDonalds, but it holds both these ideas simultaneously at the same time really well. Well worth a watch.
Email ThisBlogThis!Share to TwitterShare to FacebookShare to Pinterest
Labels: 2016, Biography, John Carroll Lynch, John Lee Hancock, Laura Dern, Linda Cardellini, Michael Keaton, Nick Offerman, Patrick Wilson