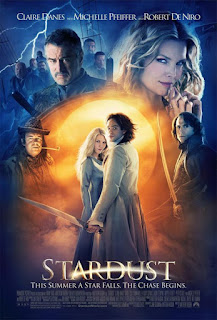 Stardust is loosely adapted from Neil Gaiman’s novel of the same name, an adult fairy tale refashioned into a crowd pleasing family film: a warm and genuine adventure story, stuffed with romance, excitement and drama.

Tristan (Charlie Cox) is a dreamy young man in the village of Wall, which neighbours the mystical and forbidden world of Stormhold. In love with the selfish Victoria (Sienna Miller), Tristan vows to travel to Stormhold and bring her back a fallen star. However, the star has landed in the form of a beautiful young woman, Yvaine (Claire Danes), and the two of them find themselves on a difficult journey to return to Wall. Along the way they must dodge the witch Lamia (Michelle Pfeiffer) who wishes to sacrifice Yvaine to regain her beauty, and the surviving sons of the late king of Stormhold, particularly the ruthless Septimus (Mark Strong), who need Yvaine’s necklace to claim the throne.

What works about Stardust is that it has an air of whimsy about it, without ever feeling whimsical or corny. It’s a grown-up fairy tale, in the sense that it has some black humour and acknowledgement of sex, but really it’s more of a charming adventure story in a fantasy setting, which manages to keep its tongue in its cheek and not take itself too seriously. Matthew Vaughn’s direction has a very light touch and never allows this soufflé of a film to either puff itself up too much, or to deflate. Instead it rolls along with a giddy charm, with a delightful odd-couple love story at the centre. It's a film that totally gets its tone spot-on, helped by confident direction and a wonderful score.

Charlie Cox plays romantic lead Tristan with a great deal of charm and really captures the romance at his centre. He also manages that extremely difficult task of being likeable – you can’t help but warm to him despite the fact that his self-awareness is completely off for a large chunk of the film. Claire Danes is equally good as the prickly Yvaine, hiding a great capacity for emotion and longing under a defensive exterior. Their romance is of course highly traditional – they bicker because they love each other! – but both actors carry it off with a great deal of style. You can't help but want them to get over their problems and get together.

The romantic plotline is also never overwhelmed by the faintly Pythonesque comedy that surrounds it, particularly from the ghostly chorus of deceased Princes of Stormhold. Vaughn produces a great cast of comic actors for this group, while entrusting Mark Strong with the lion’s share of the screentime as the dashing decoy antagonist. In fact, the construction of the film’s narrative is rather neatly done, as this plotline of the inheritance of Stormhold is largely kept separate narratively from the romantic Tristan/Yvaine storyline, with the intersections only occurring at key points.

The real antagonist of the film however is Michelle Pfeiffer’s witch Lamia, Pfeiffer offering a neat portrait of vanity intermixed with cruelty. It’s a very decent inversion of a “movie star” glamour performance, and Pfeiffer’s heartless ruthlessness is a very nice contrast with Tristan’s altruistic openness. In fact Pfeiffer is very good in this film: she gets the balance so right that Lamia constantly keeps you on your toes as to how villainous or not she may be. I’m not quite sure that the film quite manages to completely bring the two characters plot lines together to provide a really effective narrative drive to the film, but she certainly works as an effective antanogist.

The film’s structure is a combination shaggy dog story and classic quest structure, which allows each sequence to take on its tone and structure, from thriller to comedy, depending on the characters involved. What threads this together is the growing (and very sweetly structured) love story between Tristan and Yvain which keeps the momentum up as the film moves from location to location, with cameo roles sprinkled throughout, without the film losing momentum (though it is probably 15 minutes too long). The film’s comfort with letting it sequences expand is clear with Robert De Niro’s Captain Shakespeare, a feared cloud pirate whose secret desires are not so secret as he might think. The film delights in essentially extended jokes like this – but it gets away with it because these jokes manage to be quite funny (De Niro in particular turns in a very good comic performance).

It’s a film that manages to remain distinctive and original, while appealing to a wide audience, which is quite some trick to pull off. It also manages to do this without losing its distinctive rhythm, which is both endearing and enjoyable. The “rules” of its world are clearly established, and while many of the actors are slightly tongue in cheek, they never laugh at their characters but only gently tip the wink at the audience. This freedom largely comes from the conviction and honesty Danes and Cox endow the central characters with, to ground the film. It alsohas a great sense of emotional intelligence to it, and brings a lot of depth to the characters. It also helps that it’s brilliantly designed, looks ravishing and is full of several delightful performances.

There’s lots of terrific stuff in this film, with a very sweet story at its centre. In fact this sweetness is probably the secret of its success: it never takes itself very seriously, it dances lightly from scene to scene and never allows itself to become too overblown. It’s got a terrific cast and is well directed, with a snappy bounce. At moments it does feel a little long, and some sequences overstay their welcome a bit too much – but the central characters are so winningly played that you don’t really mind. Sure this is not a masterpiece, but it has a sort of magic about it, the charm, excitement, adventure and romance, all mixed together with such confidence that it’s a pleasure to watch.
Email ThisBlogThis!Share to TwitterShare to FacebookShare to Pinterest
Labels: 2007, British Films, Charlie Cox, Claire Danes, Fantasy, Henry Cavill, Ian McKellen, Mark Strong, Matthew Vaughan, Michelle Pfeiffer, Peter O'Toole, Robert De Niro, Rupert Everett, Sienna Miller