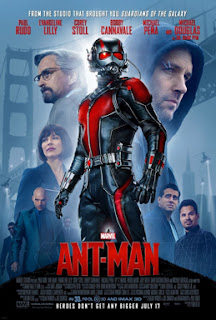 Back into Marvel’s Cinematic Universe, as yet another comic book hero comes to the big screen. Is there going to be anyone who has appeared in a Marvel comic at any point who isn’t going to find their way into a live action film at some point? It’s looking unlikely!

Hank Pym (Michael Douglas) was formerly Ant-Man, a super-hero who can shrink himself to the size of an ant, with superhuman strength. In the present, he has been forced out of his own company by his former protégé Darren Cross (Corey Stoll) and his estranged daughter Hope van Dyne (Evangeline Lilly). When newly released thief Scott Lang (Paul Rudd), desperate to provide for his daughter, steals Pym’s Ant-Man suit, Pym identifies him as the man who he can train up to take his place as Ant-Man and help to protect the shrinking technology from being misused by Cross.

Ant-Man was a project developed for many years by Edgar Wright, dynamic director of the Cornetto Trilogy with Simon Pegg and Nick Frost. But our old friend Creative Differences reared its head, and studio and director went their separate ways. Which is a real shame as you can’t shake the feeling a director with genuine invention and imagination might have been able to craft something truly original out of this, rather than the essentially solid piece of craftwork it is.

There’s nothing particularly wrong with Ant-Man. It’s just a rather average, forgettable film with moments of interest. It’s a jolly, inoffensive little caper, which goes through the motions of the origins story of a hero without offering anything that different from what we’ve seen dozens of times before now. It’s all very professionally done, and even witty in places, but it’s nothing special.

This is particularly a shame since there are genuine moments of originality. A battle between Lang and Cross, both shrunken, takes place in a child’s train set, with the film cutting between the different scales of events for some effective comic impact (so we see the train crash with seismic impact on small scale, then see the same event at normal scale where it seems laughably minor). Similarly, Michael Peña’s character tells a series of anecdotal stories in voiceover in a laid back, hipster patter, with his words and phrasing exactly lip-synched by the people in the story. It’s a neat little piece of cinematic invention.

The heist structure of the film is good fun, and the pseudo-science of shrinking is entertainingly (and consistently) explained. Even our hero’s ability to control ants doesn’t seem too silly (which is really saying something).

It’s just all pretty much what you would expect. Corey Stoll’s villain in particular seems a slightly contrived after-thought, an antagonist whose existence serves as a contrast to Lang and Pym rather than a character who seems to be organically developed. Their final confrontation is amusingly done – but it’s a familiar Marvel trope now: a hero and villain with the same powers facing off. We’ve seen it done many times since the first Iron Man film.

Saying that, Paul Rudd is a decent and engaging lead (even though he seems to be effectively playing himself) and he makes Lang into a character it’s easy to root for (even if we’ve seen the sort of “Dad wants to prove himself” narrative many, many times before). Michael Douglas could do his mentor role standing on his head, but brings the role a nice lightness of touch. Evangeline Lilly brings a nice mix of resentful and caring to a tricky role as Pym’s overlooked daughter.

The problem you always have is that everything in the film feels a little bit too straight-forward and easy. It’s not a bad thing that this is a film that simply sets out to entertain, but somehow, enjoyable as it is, you want something a little bit more rather than the rather safe concoction that we have here. It’s fun while it lasts but then it disappears from your mind almost completely once it’s finished. Is that a good thing? Well it makes good escapism. But plenty of these films have managed to be more than just something to enjoyably pass the time. Which is all Ant-Man really is.
Email ThisBlogThis!Share to TwitterShare to FacebookShare to Pinterest
Labels: 2015, Anthony Mackie, Bobby Cannavale, Comic books, Corey Stoll, Evangeline Lilly, Hayley Atwell, Marvel Franchise, Michael Douglas, Michael Peña, Paul Rudd, Peyton Reed