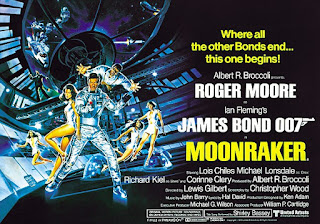 After The Spy Who Loved Me, the Bond producers had finally found a format that suited Roger Moore’s take on the role:  a comedic, tongue-in-cheek style, with Moore leaning on the fourth wall, winking at the audience. In fact, SWLM made so much money that this one feels almost like a remake rather than a new film – it’s got the same basic concept, the final sequence is pretty similar, the opening sequence again revolves around a daring parachute stunt, even Jaws pops up again. For a film that heads into truly unchartered physical territory for Bond (space!), it’s as familiar and derivative as Bond gets.

Bond (Roger Moore) investigates Hugo Drax (Michael Lonsdale), a shady businessman whose operations are expanding into space. After a string of exotic locales (a chateau in France! Venice! Mexico City! Brazil!) an evil scheme to destroy the world from space clicks into place. Bond has to take to the stars to take down Drax. Despite the criticism that will follow, this is probably near the end of Moore's high point in the role - and in none of his future films was he quite as debonair and dashing as he is here.

If you ever needed evidence that the James Bond franchise looked at whatever was popular in the cinema at that moment in time and then ripped it off as quickly as possible in their next film, then it’s Moonraker. Surely never in anyone’s lifetime would they expect to see a film that could be tagged “James Bond…in SPACE!” but after the success of Star Wars that is exactly what they were served up. The idea is so completely silly that people wonder if you’ve made it up.

But, sigh, that’s what we get here. And it is beyond silly. The film climaxes in a space battle between the NASA Marines (don’t ask) armed with laser cannons (yes you read that right), duking it out with Drax’s own personal guard also armed with cannons (it really is as silly as it sounds). All this against a backdrop of Drax’s own personal Death Star. Afterwards, Bond has to shoot down three deadly missiles that will wipe out the population of the Earth. Naturally, his targeting computer doesn’t work for the final one, so Bond has to basically “use the force” to target and shoot it down. Star Wars in all but name right? Had the producers no shame? 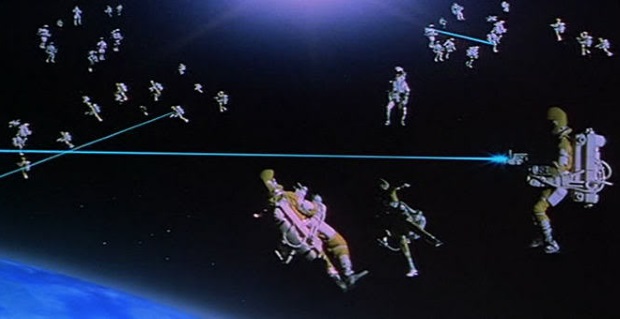 It doesn’t help that Moonraker amps up the already jokey tone of SWLM to an overbearing degree. At least it was a formula that works with Moore, but so little is treated seriously that when they do something violent it sticks out tonally like a sore thumb. This is probably the only film I can think of in which a woman is ripped apart (off screen) by a horde of hounds, followed shortly afterwards by a pigeon performing a comic double take after an amphibious gondola sails through the middle of St Mark’s Square (don’t even ask). It’s a film that has no discipline, no control and no real consistency. It dances all over the place with no logic at all. It gets the balance wrong and instead of being tongue-in-cheek often comes across as overblown, heavy-handed and ludicrous.

In fact the plot, such as it is, is hard to follow because it’s almost an afterthought. It’s effectively a reheat of SWLM (repopulate the planet with a chosen elite), while the space battles are similar to the slow motion fights of Thunderball. Bond moves from location to location with only the barest logical links. Drax identifies Bond as a threat early on – but then continues to pull out a series of bizarre and unreliable schemes to eliminate him. The action sequences feel like versions of previous films in the series – and don’t get me started on the fact Bond still hasn’t learned that punching Jaws in his metal mouth is a bad idea (he does it three or four times in this movie). Everything moves forward with a restless momentum that never allows us to connect with anything that happens.

There is some decent potential here. The fight on the ski lift is pretty good. Michael Lonsdale has a psychotic chill about him that, in a better film, might have made him a memorable villain. In fact, Lonsdale is so grounded as a villain he feels wrong for a film that’s so silly. And it’s all the more surprising he has such an outlandish scheme – or that he hangs around with such a pantomime villain as Jaws. Jaws clearly returns due to popularity – and has been thoroughly neutered as a threat here. Even before he falls in love with a girl with pigtails and switches sides, he’s already an almost comic buffoon – even bashful about knocking off a Bond aide in front of witnesses.

It’s a film that can’t decide if it’s a thriller or a comedy. It probably leans more towards comedy – which is a shame as it’s not that funny. The hideously overplayed gondola sequence tells you everything you need to know about the film’s lack of wit. Its comedy is as overplayed and heavy-handed as some of the action can be – more likely to get you rolling your eyes than holding your sides. Saying that, it does have possibly the best final punchline of any of the films (“I think he’s attempting re-entry sir”) – the sort of joke you probably didn’t get when you first watched the film aged about 10. Other than that it’s like a series of gags told by people who aren’t really that funny.

Moonraker is the sort of bizarre freak of nature that you almost can’t believe exists. Leaving aside its amping up of the tongue-in-cheek formula into the realms of the bizarre, it’s basically a bit too stupid and unbelievable for even this franchise to pull off. Lasers? Space-stations? Space marines? Bond in space? I mean really? As a rip off of Star Wars it leaves a lot to be desired – and so long as these films take place in a world that is even vaguely linked to our own, plots like this just have the stench of bullshit.
Email ThisBlogThis!Share to TwitterShare to FacebookShare to Pinterest
Labels: 1979, Action Films, Bernard Lee, James Bond, Lewis Gilbert, Lois Chiles, Michael Lonsdale, Richard Kiel, Roger Moore, Science fiction