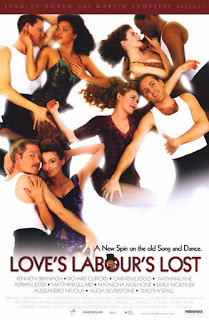 Love’s Labour’s Lost is one of Shakespeare’s lesser-known comedies. There is a reason for that – it’s simply not that good (it’s certainly the weakest Shakespeare play Branagh has brought to the screen). I’ve sat through some turgid, and terminally unfunny, stage productions of the play in the past – but this movie version presented something different, as Branagh plays fast and loose with the script and turns it into an all-singing, all-dancing musical, with only the barest sprinkling of Shakespeare dialogue.

LLL isn’t really about anything. The King of Navarre (Alessandro Nivola), invites his three best friends (Kenneth Branagh, Adrian Lester and Matthew Lillard) to join him in three years of academic study, during the course of which they will forsake all female company. Of course, no sooner than the deal is made but the Princess of France (Alicia Silverstone) and her three companions (Natascha McElhone, Emily Mortimer and Carmen Ejogo) arrive in Navarre. Will love blossom to prevent the plans of the King? You betcha.

It’s slight stuff. The play always feels a little bit unfinished – it ends with the lovers separated (or as the play puts it “Jack hath not Jill”) but with hints of hope. It’s oddly structured – more like the first part of a series of plays than a standalone (the lovers don’t get together until almost Act 4, and the men and women spend very little time together). There is a series of dull sub plots revolving around the academics of Navarre, with whole scenes made up of obscure Latin jokes. As the icing on the top, a clown and a foppish Spaniard form a bizarre love triangle with a busty country wench. None of these plots is really resolved at the end. It’s a play that focuses a lot more on floral dialogue and intricate poetry rather than narrative.

Branagh addresses a lot of these problems by simply trimming the play to the absolute bone. I would guess at least 65% of the dialogue has been cut – probably more. Although this means some roles are now so small they feel like sketches (in particular many of the more working-class characters and academics), it does mean that this has a bit more narrative thrust and energy than most productions. Moving the setting to 1939 also gives a good context to the play, and places the political issues into an understandable context. It also gives a tension to underlie the lightness of the rest of the play. Branagh manages to remove most of the cumbersome exposition dialogue by replacing it with a series of 1930s-style cine-news reels (spryly voiced by Branagh himself). He even resolves the “cliffhanger” ending of the play with a similar device (reflecting the tonal shift at the end of the original play), which helps to ground the otherwise lightweight play in a very real world, where war carries a cost.

Of course, the main invention was to replace the intricacy (and obscurity!) of some of the dialogue with song and dance routines. The songs are carefully chosen from the great musical composers of the 1930s and 40s, and are delicately interwoven with the dialogue. Now for the purist this could of course be a source of fury, but when the material is one of the weaker plays, getting this “greatest hits” version of the text alongside some excellent songs works really well.

The song and dance numbers also have a certain charm about them. Most of the cast are not especially talented singers and dancers – only Nathan Lane and Adrian Lester have song and dance experience (and it certainly shows when Branagh allows them to let rip). The actors went through an extensive “musicals boot camp”, which certainly taught them the steps, but the musical numbers still retain a charming amateurishness about them. Sure it helps a truly gifted dancer like Adrian Lester stand out, but it’s also quite sweet to see actors like Richard Briers tripping the light fantastic. (Check Lester out at around 3:10 in the video below).

The film is shot with Branagh’s usual ambition on a set that has a deliberate air of artificiality about it, evoking the classic 1930s studio musical. All exteriors deliberately feel like interiors, and there are homages aplenty, from Singin’ in the Rain to Ethel Merman. Each musical number has its own unique feel and the majority are shot with Branagh’s usual love of long-take. Some of the numbers stick in the head longer than others – but that’s just the nature of musicals. Particularly good are I Won’t Dance, I Get a Kick Out of You, I’ve Got a Crush on You, Cheek to Cheek and a steamy tango to Let’s Face the Music and Dance.

LLL doesn’t want to do anything more than entertain – and sometimes it probably tries a little too hard to be light and frothy, as if Branagh was consciously kicking back after the mammoth undertaking of his uncut Hamlet. Perhaps that is why LLL appealed to him – Shakespeare comedies don’t get less treasured or more inconsequential than this, so he had total creative freedom to do what he liked, in a way that a Twelfth Night or a Much Ado About Nothing wouldn’t allow him. It’s the sort of film you need to plug into the mindset of – and some aren’t going to be able to do that. It’s not a perfect film, but the lightness Branagh handles things with pretty much carries it through.

Perhaps that lightness however is slightly the problem: in Branagh’s previous films he found a perfect mixture between influential reimaginings (Henry V), wonderful crowd-pleasers (Much Ado) and reverential labours of love (Hamlet). People probably expected something else from him than a high-budget, lightly amateur musical with precious little Shakespeare in it. I think this partly explains the hesitant response this has received from the public and critics since: it’s just such an unlikely ideal that people didn’t seem to know how to respond to it.

Of course, as anyone who has sat through an average production of the play can tell them, they weren’t missing much from what has been cut – and this is still an infectiously funny, frothy concoction. It may have a slightly mixed acting bag – some of the leads are underpowered, while some strong actors like Timothy Spall are underused – but the actors do seem to be enjoying themselves, and this enjoyment basically communicates to the audience. It’s not a concept that could have worked with a long running time, but it sure works for the short term. It’s an odd concept – and it was a huge box office bomb – but it’s one that works.
Email ThisBlogThis!Share to TwitterShare to FacebookShare to Pinterest
Labels: 2000, Adrian Lester, Alessandro Nivola, Alicia Silverstone, Box office bombs, Carmen Ejogo, Emily Mortimer, Kenneth Branagh, Matthew Lillard, Musicals, Natascha McElhone, Nathan Lane, Shakespeare, Timothy Spall