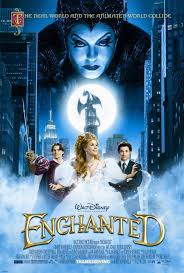 With Disney devoting themselves full-time to remaking their back catalogue of classics, replacing animation with live actors, it’s nice to be reminded how imaginative combining animation and live actors can actually be. Enchanted is an original story, packed with charm and feel-good warmth – and for my money it’s streets ahead of the production-line remakes churning out of Disney.

In the animated world of Andalasia, Giselle (Amy Adams) is the classic Disney heroine – singing joyfully, talking with animals, all the usual trappings. She falls (instantly, of course) in love with the dashing Prince Edward (James Marsden), but Edward’s cruel step-mother Queen Narissa (Susan Sarandon) is determined to thwart the match so she can retain the crown. On Giselle’s wedding day, Narissa pushes her through a magic well to a place where there are no happy endings: modern day New York. Stuck in the real world, Giselle meets quietly disillusioned family lawyer Robert (Patrick Dempsey) and his 6 year old daughter Morgan – can Giselle adjust to the modern world? Can Edward save her? And will she want to go back?

The star turn is Amy Adams, and she is terrific. This is one of those performances that looks easy, but is in fact extraordinarily difficult. She simultaneously plays a fairytale character in the real world, with a cartoon’s outlook and understanding, but also subtly deepens and enriches this character with real world traits, developing and growing her personality to become someone who feels “real”. She does this without jarring gear changes or sudden swings – and holds both these characterisations together simultaneously. So Giselle’s fundamental personality doesn’t change, while her outlook and understanding changes dramatically. She’s endearing, a wonderful light comedian, and her singing and dancing is terrific. It’s not too much of a jump to say she basically is the movie.

And an enchanting movie it certainly is, one part affectionate recreation of Disney, one part affectionate send-up. Relocating the conventions and style of a Disney movie to the real world allows a lot of fun, as Giselle musters the animals of New York to help her clean (pigeons, rats and flies) or recruits the people of Central Park into an extended song and dance routine while Robert looks on with bemused confusion. It helps that the songs are so well written – Alan Menken and Stephen Schwartz’s tunes are basically classic Disney tunes with a satirical bent, which means it’s perfectly possible to enjoy both for what they are and for the dry commentary they offer on Disney.

In fact that’s why the film works so well: it is so blinking affectionate. There is no cruelty about it and none of the tedious “smarter than thou” referencing of, say, Shrek. Instead it teases Disney, while simultaneously understanding the vast majority of us love these films: that if we had the chance, as Nancy does, we might well jack in the real world for a fairytale. We don’t want “gags for the grown-ups” or dumb film references: if a film concentrates on making itself sincere and engaging, it will engage both adults and children at the same time.

The film really successfully bowls along, full of entertaining charms and gags. In fact the appeal of the fish-out-of-water plotline with Giselle is so effective the sub-plot around the villainous Queen Narissa actually becomes less interesting. While the presence of a villain of this type is a pretty central part of the Disney structure, it never quite comes together here – it feels like something inserted due to the rules of the genre rather than an organic part of the story. Now it is essential there is some peril to propel the story forward, but Narissa just isn’t quite interesting enough (and the final battle with a CGI dragon, while a great recreation of similar moments isn’t really gripping). Fundamentally the emotional and dramatic culmination of the film is Giselle realising what she wants – and it’s this compelling human story that powers the film.

But this is a niggle in a charming and very funny film. Amy Adams is of course the star, but Patrick Dempsey very successfully adds warmth to the “stick-in-the-mud” straight man who flourishes as the film progresses (in a nice touch, he slowly takes on the very singing, dancing, cartooney traits he finds so bemusing in Giselle). James Marsden has huge fun as the gently egomaniacal Prince Edward, providing many of the film’s belly laughs with his unreconstructed fairy-tale hero view of the world.

Enchanted works so well because it’s both a subtle commentary on Disney fairytale films and also a marvellous fairytale itself. With a terrific performance from Amy Adams (how did she not get an Oscar nomination for this?) and some cracking songs, the film is wonderfully entertaining, making some gentle fun of its genre, while also celebrating it. It only wants to entertain and enchant you – and it certainly succeeds.
Email ThisBlogThis!Share to TwitterShare to FacebookShare to Pinterest
Labels: 2007, Amy Adams, Disney, Idina Menzel, James Marsden, Musicals, Patrick Dempsey, Susan Sarandon, Timothy Spall