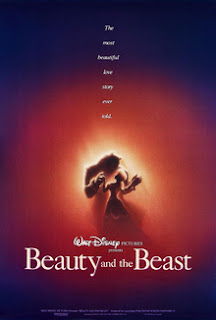 After decades of average or forgettable films, in the early 90s Disney had a sudden renaissance. From 1989 to 1998, the studio was a veritable hit factory, with films from The Little Mermaid to Mulan, via classics like The Lion King and new ideas like Hercules all being lapped up by audiences. Perhaps the most widely loved (and maybe even the best!) of this era was Beauty and the Beast.

Like all the best Disney films, the story is traditional with a modern twist. Belle (wonderfully voiced by Paige O’Hara) is a young woman in a small provincial town who wants so much more than spending her time dodging the unwanted attentions of handsome local hero Gaston. When her eccentric father Maurice is imprisoned in a mystical castle by a terrifying Beast (Robby Benson, who combines sensitivity and ferocity), she agrees to take his place, while the Beast (and his enchanted servants) all hope she might break the spell placed on them by falling in love with him.

This was the first animated film to ever be nominated for Best Picture, back in the days of only five nominees and it was hard to sneak onto the list if you weren’t a heavy-going “important” piece of film-making. If that’s not a testament to its greatness, I’m not sure what is. It’s one of the best mixes of Disney magic: charming, delightful, sweet, funny and exciting. It has a heroine who feels real, independent and relatable and a hero you empathise with, even while he behaves badly. It’s got a villain who first seems an arrogant blow-hard before his real brutishness is revealed. All this in a very romantic, engrossing storyline, with a host of supporting characters it’s impossible not to like.

So why does this work so well? It’s sweepingly, lusciously drawn and it drips romance and humanity. Everything stems from those central characters, and the amount of empathy we feel for them. Like all great films, this knows without characters we invest in, nothing else works – no matter how many great numbers and funny lines there are (and there are plenty of both!). 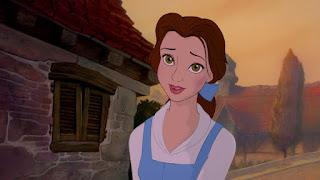 Belle could have easily been either a flighty romantic or an aloof autodidact, but the film crafts her into a grounded romantic, dreaming of more but knuckling down and dealing with the hand life has dealt her. Facing a life of captivity she resolves to do what she can to make her life bearable. She’s determined and independent and exhibits genuine intellectual curiosity alongside her empathy. She feels real, and you invest in her reactions to things because those reactions feel normal. 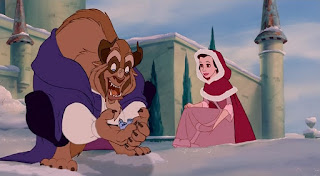 An even bigger challenge is the Beast, but it’s triumphant in the handling of this tricky character. He is ferocious, but the film quickly and efficiently makes clear his anger is based in pain and vulnerability, and intense isolation. Careful shots establish his self-loathing – his slashing of a painting of his pre-transformation face couldn’t be much clearer. Even at his most furious, we gets quiet moments of vulnerability. The animation of the Beast is perfect – his face is fierce, but his eyes are wonderfully expressive. His facial features at key moments relax and fold in to show someone far more gentle. He’s like everyone on a first date, scared to express his deeper feelings. The animators marvellously capture both his power and surprising delicacy. His boyish enthusiasm is infectious – his excitement in gifting Belle the library is heartwarming. In fact he’s so endearing and engaging a character, I think everyone feels a twinge of disappointment when he is replaced by a human being in the final scenes!

Revolving around these two is a wonderful cast of engaging characters. The primary servants in the plot – Lumière, Cogsworth and Mrs Potts – are all strong, unique and three-dimensional characters with more than enough depth to eschew their basic character traits (Cogsworth’s name even rhymes with jobsworth, Lumière is a charming rogue and Mrs Potts a motherly matron) to become characters we end up caring deeply for, that feel real. 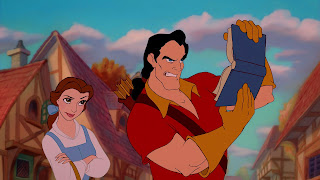 The film also borrows from Jean Cocteau’s La Belle et la Bete to create the character of Gaston, possibly one of the most interesting villains in Disney. Drawn with a certain conventional handsomeness (although he looks smug enough for you know he’s a wrong ‘un from the start), Gaston is a character who questions many of the assumptions made linking popularity and handsomeness with goodness. He’s also a character who grows measurably darker through the film due to his own choices, rather than being inherently villainous from the start.

It’s all part of the richness of the world the film creates – everything feels natural and all the characters real and understandable. Maybe that’s partly why it works so well – it’s a film that is animated, rather than a cartoon. With a tight plot, good pacing and a clear focus, it’s focus is on emotion and characterisation, and it avoids cheap laughs, with comedy growing organically. Because the characters themselves are so compelling, the events carry huge dramatic force – when Belle is threatened by wolves, we genuinely fear for her; when the heartbroken Beast can barely rouse himself to fight Gaston we are overwhelmed with pity and concern.

Of course it is also a cartoon, and much of the triumph of it is based in the animators’ successes. The imagery is gorgeous, the detail in each frame is wonderful, the design of the castle is fantastic (we’ve already talked about the influences of Cocteau’s film, but it’s clear again here). The famous ballroom scene is wonderful – the “camera work” marvellous, the creation of the ballroom awe inspiring (genuinely we all thought it was real at the time!). Time and again the filmmakers use inspired framing and composition that conveys the emotion. The performances they draw from their characters is exceptional – the expressiveness given to all of the characters, from Belle and the Beast to the faceless tankards in the castle, is brilliant. You can freeze-frame any single scene from the movie and be able to instantly identify how every character feels.

This is the true Disney magic: this world is real, because everyone in it feels so alive. It captures your heart, from its marvellous stained-glass opening telling the backstory, to the triumphant swelling score that meets the ending. I’ve barely mentioned the songs, but each one is brilliant, an instantly recognisable, pleasurable earworm – in fact, this film may have the best songs of any Disney film in the canon. Beauty and the Beast is so good that, never mind being nominated for best picture, it arguably would have won in many years (it lost to The Silence of the Lambs: it’s hard to imagine a film more tonally different!). Endlessly enchanting, charming, warm, funny, moving and exciting, this is a masterpiece and a landmark in Disney animation.
Email ThisBlogThis!Share to TwitterShare to FacebookShare to Pinterest
Labels: 1991, Angela Lansbury, Disney, Gary Trousdale, Jerry Orbach, Kirk Wise, Musicals