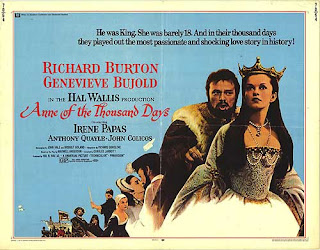 Anne of the Thousand Days fits neatly into Hollywood’s obsession of the 1960s: the grand British historical epic, crammed with costumes, old locations and leading Brit actors in beards mouthing “olde English” style dialogue. Some of these films are of course marvellous – A Man For All Seasons being possibly the best – some are merely competent. AotTD falls very much in the latter category. It’s a solid but dry and rather self-important piece of entertainment, more interested in wowing you with its pageantry than moving you with its emotion.

As the film opens, Henry VIII (Richard Burton) considers whether or not to sign Anne Boleyn’s (Genevieve Bujold) death warrant. The film then flashes back to tell us the story of Anne’s rise and fall. Along the way, the usual figures from Tudor history are wheeled out: Wolsey, Catherine, More, Cromwell and assorted Boleyns.  And of course, the whole thing ends with Anne proudly proclaiming her daughter will one day be the greatest queen of England, with quite exceptional clairvoyance given how unlikely that would’ve actually looked at the time.

The main problem is it isn’t sure what it wants to say about its central character. It wants to simultaneously position her as a strong, “modern” woman with her own ambitions but as a woman succumbing to passion. Essentially, it wants to have its cake and eat it: for Anne to understand Henry is far from love’s ideal vision, while not wanting to lose their “Great Romance”. So we have scenes where Anne questions why anyone would want to marry Henry or talks of her desire for peace, and later scenes where she demands the judicial murder of all who refuse to accept the marriage.

And it may want to show Anne as a modern woman, but – frustratingly – it’s only actually interested in her as a romance object. Her modernity is solely expressed in defying her family to try and marry someone other than Henry, and having spirited “I hate you/I love you” sparring matches so beloved of Hollywood. But the film has no interest in her intelligence, her involvement in the Reformation, or how this led into dangerous conflict with the increasingly powerful Thomas Cromwell (here her downfall is solely down to her inability to produce a son, and being jealous of love rival Jane Seymour, here playing the sort of minxy temptress Anne is often accused of being).

And even this simplified, Mills-and-Boon Anne is inconsistent– one minute she’s a sweet young girl bravely resisting her unwanted royal suitor. Then, she’s delighted with the power that comes with allowing the King to court her. Equally suddenly, she falls in love with him (though that scene is so confusingly written it’s initially unclear whether this is genuine or simply a ploy to win back the attention of Henry). Even away from the central “romantic” relationship, her character oscillates – she schemes revenge against Wolsey, but then is too nice to take Hampton Court from him.

Despite this, Genevieve Bujold delivers an excellent performance. The film successfully plays up her youth early on, and she brings the role a lot of passion, fire and intelligence. Her French-Canadian accent also makes perfect sense considering Anne was largely brought up at the French court. Bujold does her best to hold together an inconsistent character and delivers a real sense of Anne’s independence and intellectual strength. Not even she can completely sell the competing visions of Anne the film has, but she does a very good job with what she is given.

Richard Burton was allegedly fairly scornful of his performance, but he is terrific. One area where the film does succeed is repositioning Henry as a proto-tyrant, who literally cannot conceive he is wrong. In a memorable scene, Henry explains that, ruling as he does through God, any thoughts in his head must have been placed there by God, ergo he can never be wrong. If that isn’t a tyrant, I’m not sure what is. Burton’s charisma is perfect for a man who can flip on a sixpence from bonhomie to fury. While Anne’s intellectualism is overlooked, the film does a great job of demonstrating Henry’s intellectual fakery, via his bland and overbearing musical compositions (met with a rapturous response from the court). Lords literally breathe sighs of relief after they leave his presence. Burton may not be an ideal physical match, but embodies Henry’s ruthless selfishness and towering ego.

It’s a shame that, despite having strong performances, the film is not only so confused, but also so flat and dry. Charles Jarrott frames the film with a dull conventionality, carefully letting costumes and production design fill the screen like a dutiful workman. Has he got any really interesting ideas for shooting this stuff, or presenting a routine plot with any freshness? Not really. Instead we get spectacle, and inevitable rundown of events, but no real sense of novelty. It turns the whole thing into a rather slow, reverent slice of British history, dry and stodgy, ticking off events as it goes. 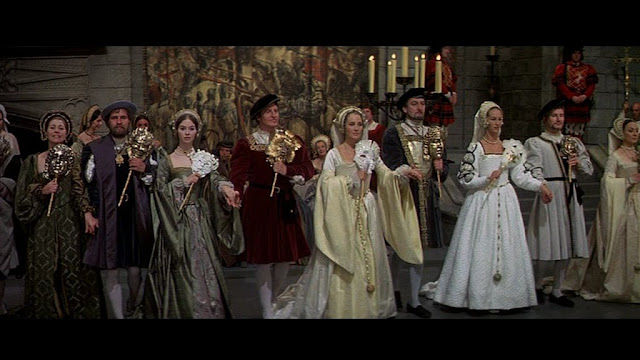 Those events come and go with a confused focus. The foundation of the Church of England is under explained. The fates of several characters are left unresolved – in particular Cardinal Wolsey (an otherwise excellent Anthony Quayle) simply disappears. The final condemnation of Anne is rushed and confused (you would be forgiven for not really understanding who she has been accused of sleeping with, and the alleged incest between her and brother is almost thrown away). Other characters are simplified (despite good performances from their actors):  so William Squire’s More is upstanding and honest, while John Colicos’ Cromwell is dastardly and scheming.

Anne of the Thousand Days is rather old fashioned and probably best watched now as a Sunday afternoon film. It tells a very, very familiar story (how many times have we seen Henry/Anne’s romance on screen before and since) without too much originality, and largely fudges putting together a clear sympathetic portrait of its central character. Having said that, it is well acted and looks wonderful. It’s just also rather dry and far too aware of having an “important” story to tell.
Email ThisBlogThis!Share to TwitterShare to FacebookShare to Pinterest
Labels: 1969, Anthony Quayle, British Films, Charles Jarrott, Geneviève Bujold, Historical epics, Irene Papas, John Colicos, Michael Hordern, Richard Burton, Tudor history