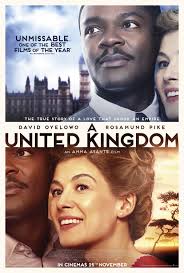 Some films just have a safe, crowd pleasing, “your whole family would like it” feel to them. A United Kingdom falls very neatly into this category. It’s a simple and straightforward story, told with a cosy safety that won’t challenge you or really stick in your memory.

Seretse Khama (David Oyelowo), heir to the throne of the Bamangwato tribe in what will become Botswana, is studying law in England in the late 1940s to prepare for his reign. He meets and falls in love with London girl Ruth Williams (Rosamund Pike) – and despite the protests of their families and their nations, they marry and resolve to build a life in his country working for the betterment of his people. But first they must overcome what seem insurmountable obstacles.

A United Kingdom is a very well-meaning film. It has an important story to tell about acceptance and prejudice. Many of the points it makes about the negative reactions to mixed race marriages and colonial politics are still painfully relevant today. It’s an earnest and good-hearted film. It’s just a real shame that it’s also not that special.

It’s well acted by the two leads, we can give it that. Sure they are presented as almost flawless individuals, but David Oyelowo and Rosamund Pike are engaging performers and give a lot of emotional weight to the story. Their courtship is sweetly hesitant and their relationship feels real and lived in. Oyelowo brings much of the magnetic charisma he has shown in a wide range of films to the part, and Pike’s neat mixture of prim Englishness, decency and stubborn self-determination work really well.

But the story it so simply done, the whole thing feels like a TV movie of the week. The film is flatly directed and conventionally shot: London is always dark, filmed through a blue lens, with rainwater or fog dripping off every shot. Africa by contrast is a vibrant, orange lensed place where every sunset and sunrise looks like a painting. Very few shots show much more imagination than that. There is no flair or originality to the cinematography, the composition of the shots, or even the musical score (which swells up stirringly at emotional moments and then fades instantly from memory). On every technical level, it can boast nothing more impressive than workman-like competence.

The narrative is equally simplistic: our heroes fall in love, deal with rejection, passionate speeches are made, allies are slowly won over and a deus ex machina finally makes everything fine. The stakes of what Seretse is putting at risk through his marriage are never made completely clear, despite all the talk of digging and diamonds. The final resolution of the entire problem is so simplified, contrived and rushed I almost had to double check the runtime to see if I missed anything. It’s all part of the same simplification in the story that sees sides change with confusing speed – Seretse’s sister goes from rejecting Ruth to treating her like a sister in a blink; Ruth’s father (distractingly played by Nicholas Lyndhurst, forever Rodney) is given one moment in a cinema to switch from prejudiced British working man to repentant father.

The characters themselves are very plainly drawn: they are either goodies or baddies with no attempt made to look at the deeper feelings or motivations behind them. For instance, Seretse’s uncle is shown as simply outraged by the marriage, with no attempt to explore why a marriage like this may not have been seen as ideal in a fragile community, or how it might have made holding a deal with the UK together difficult. Similarly, the Brit characters are almost to a man mustachio twirlers or bitchy mem-sahibs, callously sipping sherry as they thwart Seretse and Ruth’s plans. (Spare a thought for poor Tom Felton, yet again hired to play Draco Malfoy In A Different Historical Costume.)  Even Clement Attlee (so regularly beautified as the Prime Minister who oversaw the creation of the Welfare State and NHS) is portrayed here as a cold-hearted architect of realpolitik.

By making its lead characters so saintly and pure, and anyone who disagrees with them so cruel and sunk in villainy, the film weakens itself. Yes it has a sweet relationship at the middle, but it also manages to make this feel slightly lightweight, because the film itself is so flimsy. When their opponents are such cartoonish baddies, and their aims for their country so unclearly explained, it minimises the impact of the story. Instead of showing us the birth of a modern, democratic nation through the focal point of one couple’s struggle against prejudice and adversity, it makes both personal and national triumphs feel actually less impressive than they were – no more than a Sunday afternoon, Mills & Boon tale of a working class London girl and a handsome, “exotic” stranger.

A United Kingdom is an important story that has made itself into a slight one, a conventionally filmed and simplistically told tale that never carries the weight and impact it should do. Despite good performances from the leads, it’s really nothing special.
Email ThisBlogThis!Share to TwitterShare to FacebookShare to Pinterest
Labels: 2016, Amma Asante, Biography, David Oyelowo, Jack Davenport, Jack Lowden, Laura Carmichael, Rosamund Pike, Terry Pheto, Tom Felton