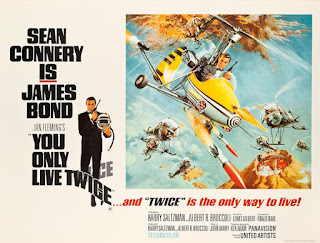 James Bond films: always fun, even when not that good. You Only Live Twice is probably the prime example. For many, many reasons, it isn’t actually very good but still remains strangely enjoyable just because, well hell, it’s Bond.

Anyway YOLT revolves around naughty super villains SPECTRE nabbing US and USSR space missions, hoping to provoke a nuclear war between the two superpowers. Apparently they will profit handsomely from this – but how they see that happening in a nuclear wasteland isn’t clear. Anyway, James Bond (Sean Connery) fakes his own death and heads to Japan to investigate. Events peddle around Japan for ages, giving filmgoers the chance for some vicarious sight-seeing, before culminating in an all-out attack by Bond and a gang of ninjas on the hollowed-out volcano base of SPECTRE chief Blofield (Donald Pleasance).

YOLT is the moment Bond started to head full tilt towards the Moore-era of overblown, fantasy silliness. The plot is total bobbins (despite being repeated in The Spy Who Loved Me, Moonraker etc.) with both Russians and the US naturally continuing to suspect each other, even when each side loses a spacecraft (though I did like the fact that the actual astronauts together in captivity are shown to have far more in common than not). There is no logical reason for them to behave like this, even at the heart of the Cold War.

There is plenty of other nonsense here. Bond’s death is faked early doors for no reason (only the hopeless SPECTRE is in any way fooled). Bond meanders around Japan with even less subtlety than usual, with a series of clashes, fights and chases that make little real narrative sense at all. Later, again for no reason, (and almost unbelievable to watch today) he disguises himself as a Japanese man (PC alert ahoy, as Bond cuts his hair with a bowl and tans his skin. At least he doesn’t tape his eyelids back…). He also finds a kindred spirit in Tiger Tanaka, both of them treating a host of female servants as a shopping list for rumpy-pumpy.

As per many Bond films, the franchise clambers on top of a current fashion to feel hip and cool (but actually manages to feel fusty and stuffy). This time it’s the samurai craze, as Bond joins a sword-swinging, ninja training school. Yes, you read that right. But of course Bond also needs to get married before the attack: again why? His wife is of course offed seconds later, and Connery just about manages to look put out at this coitus interruptus (more on Connery later…)

SPECTRE themselves are hilariously incompetent. They are hoodwinked like children by Bond’s ludicrous faked death. They practically signpost their location by bumping off anyone who gets within about five miles of the place. Later, poor Blofield not only carefully talks Bond through the self-destruct button for his rocket, he also lets Bond take back his clearly gadget-concealing smoking case, blows away two sidekicks (one right in front of Bond) rather than eliminate Bond himself, then caps it all with sending the base itself to kingdom come. SPECTRE’s agents are equally useless, with Brandt too attracted to Bond to finish him off (and then deciding to tie him up in a plane, detonate a grenade in it and then parachute out to leave the plane to crash with Bond in it – needless to say Bond lands the plane with ease).

The volcano base, however, is a triumph of production design – it’s staggering to think that everything you see on screen was built for real. It’s huge and iconic – and the battle scene between the aforementioned ninjas and SPECTRE goons that fills the final act of the film is hugely exciting, despite almost every single thing making virtually no sense. Incidentally the final battle’s structure is lifted almost completely for a similar sequence in The Spy Who Loved Me.

The problem is that everything else leading up to this feels like all involved are going through the motions – as if there wasn’t really anything fresh left to do or say in the Bond-verse. Need a glamourous location. Never been to Japan have we? Need some scuffles – not sure we‘ve done a roof top fight in long shot, let’s chuck that in. How about we kill Bond off for a few seconds – yeah never done that before. A super gadget needed? Bring on suitcase-assembled helicopter, Little Nellie. The final reveal of Blofeld is fun, but when you come back to watching the film you realise he’s as bland and identikit as Largo or Dr No – a pompous windbag who fucks everything up.

Stumbling through all this is a clearly bored Sean Connery. By this time, Connery was sick of the part (“I’ve always hated that damned James Bond, I’d like to kill him” he was to later say), and money was the only thing tempting him back. Connery coasts through the whole movie with the air of a man who would rather be anywhere else. There is no sparkle at all, just a weary going through the paces. He can barely raise a smirk, let alone a glimmer of interest in the events around him.

It’s the atmosphere of the whole film. Roald Dahl (yes that Roald Dahl) did the script – but he felt the book was pretty awful (one of Fleming’s duller efforts) so spiced it up with some new content. Problem was the suits basically demanded a certain quota of set pieces and a certain number of Bond girls. Trying to deviate from this template too much was far too difficult a challenge. Lewis Gilbert’s direction is professional but pretty uninspired: it sums up the whole movie.

Most of the acting is pretty non-descript. Donald Pleasance at least deserves some credit for making Blofield’s appearance iconic and for doing a nice line of whispering menace. Charles Gray is pretty good fun as a camp British contact (“That’s stirred, not shaken. Is that right?”) – though SPECTRE (true to form) confirm all his suspicions by knocking him off after less than minute or two on screen. Everyone else blends into one.

So, anyway, YOLT is really nothing special – a tired entry into a tired franchise, with an all too obviously disillusioned star and action beats that largely feel like retreads of things we’ve seen before (done better) in the series. But yet, but yet… Somehow enough of the old Bond magic keeps you watching. Sure Connery is indifferent and the action more a travelogue than a thriller – but the final sequence is exciting, Blofeld (for all his ineptitude) makes a decent enough villain, and while no-one really gets het-up about it, the stakes do feel fairly high. Stretches of the film are dull – but others work very well. You may only watch twice, but it will be fun enough.
Email ThisBlogThis!Share to TwitterShare to FacebookShare to Pinterest
Labels: 1967, Action Films, Akiko Wakabayashi, Bernard Lee, Charles Gray, Donald Pleasance, James Bond, Lewis Gilbert, Sean Connery, Spy thrillers, Tetsurō Tamba