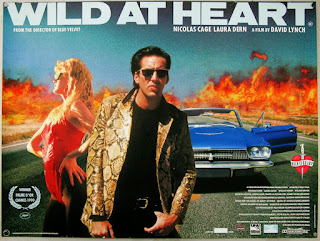 David Lynch is an eccentric film director. I think that is a fair comment. At his best, he combines his “view askew” look at the world with genuine comedy and pathos. At other times, his films disappear down a self-reverential rabbit-hole that seems designed to frustrate and alienate the viewer. Wild at Heart is the latter type of movie.

Sailor Ripley (Nicolas Cage) is released from prison after his self-defence response to a knife-wielding man at a party turns into a homicidal fury. The knifeman may (or may not) have been hired by Marietta (Diane Ladd), mother to Sailor’s “girl” Lula Pace Fortune (Laura Dern, Ladd’s real life daughter) a woman with a sexually troubled background of abuse, who is in the middle of a sexual awakening. Together they go on a road trip to – well just kinda to get away I guess.

I’ve got to confess I really hated this movie. I only stuck with it to the end, because (a) it wasn’t that long and (b) I wanted to have actually watched the whole thing before I laid into it in this review. This film is the absolute worst elements of Lynchian oddness and gore mixed with pop-culture references to the 1930s through to the 1950s.

In fact it’s a film that is so totally obsessed with these two things that there is literally no room in it for any real plot or emotion. Instead it’s full of pointless, smug and irritating visual and audio quotes from Elvis to The Wizard of Oz, and empty characters played by showboating actors giving massive performances under ostentatious make-up, all to hide the fact that the film (for all its bombast) is a shallow as a puddle. It’s a horrible piece of intellectual fakery, that pretends to be about deep profound themes about love and death but tells us nothing about them. In the end it gets more delight from Dafoe blowing his head off with a shotgun than it does from anything to do with its so-called themes.

Lynch piles on the violence for the sake of it, all in the name of parodying the aggression that lies under his apple-pie surface Americana. This worked in Blue Velvet because the contrast was so great, and the characters (for all their larger-than-life qualities) felt real. Here, everything feels artificial. A constant visual image of fire and flames runs through the story – it’s a reference back to the murder (it’s not a surprise to say) of Lula’s father (burnt alive on the orders of his wife it turns out). This adds nothing at all to our understanding of anything – particularly since Marietta is the most obviously corrupt and hypocritical character from the start, drawing attention in such a ham fisted way to her past misdeeds, and the impact of them, hardly seems necessary.

The film is full of signs of man’s inhumanity – the brutal shootings, the torture of Harry Dean Stanton’s luckless PI (toned down considerably from the original cut), Sailor’s brutal murder at the start, a road accident peopled with twisted bodies – but it’s all so bloody obvious. We get it David, the world is bad and people suck. Just because you’ve shot this with some tricky angles and carry it across with a tongue-in-cheek delight at your own naughtiness doesn’t make this a masterpiece. It just highlights the shallow emptiness you are peddling as art.

The rampant self-indulgence spreads to the actors. You’d think Cage would be perfect for Lynch right? Wrong. His hideously self-conscious performance of overt oddity here just makes his performance all the more unbearable. Diane Ladd gives the sort of performance many call brave, but is really just about shouting and smearing lipstick all over her face. By the time Willem Dafoe turns up with ludicrous teeth, ripping into the scenery, you’ve lost all patience. The only person who emerges with any credit is Laura Dern, who at least invests her characters with some level of humanity and sweetness. Everyone else (everyone!) is a stock cartoon drawing.

But even Dern is cursed with Lynch’s awful sexual abuse sub-plot, which is genuinely offensive in its trite shallowness and in its suggestion that having sex with your uncle as a young teenager will turn you into a real goer later in life. Did he really deal with the same themes with such sensitivity in Twin Peaks? As for the so-called romantic happy ending – it’s unearned in any way by the film, which has treated the subject with scorn. The film's dark wit isn't even particularly funny - everything is so dialed up to eleven, that all the comic beats get smothered in over acting or over stylised dialogue and action.

Wild at Heart won a flipping Palme d’Or (to be fair the announcement was booed). But don’t be fooled. This is a film pretending an intellectual depth it never gets anywhere near to achieving. It’s a horrible, pathetic, cruel and empty film that thinks it’s a satire on the dark heart that lies at America’s soul. It’s not. It’s just a cartooney, self-important lecture which mistakes oddity and eccentricity for heart. Lynch is a talent for sure, but here his talents are sorely misdirected into indulgent, childish emptiness and faux profundity. Don’t watch it.
Email ThisBlogThis!Share to TwitterShare to FacebookShare to Pinterest
Labels: 1990, David Lynch, Diane Ladd, Harry Dean Stanton, Laura Dern, Nicolas Cage, Palme D'or, Road movie, Sheryl Lee, Willem Dafoe