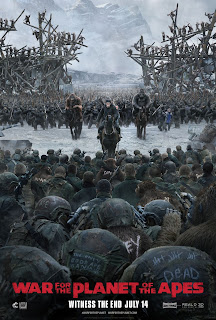 The Planet of the Apes trilogy of the past few years is so far superior to the original films (bar the first) that even decent efforts still stand tall over their forebears. War isn’t quite the classic you want, but it is a worthy companion to the two previous films, and sets a tough act to follow for (inevitable) sequels and remakes.

Caesar (Andy Serkis) is nearing the end of a long war with humanity, desperate for peace to allow the apes to set up their own home. But after a night attack by demagogue rogue soldier The Colonel (Woody Harrelson) leaves Caesar suffering a huge personal loss, he finally succumbs to his rage and anger and goes on a quest for vengeance, accompanied only by his oldest and closest companions. Along the way he discovers the doom of mankind has already begun, with a virus slowly robbing them of the power of speech and reason.

It’s a slight shame that the final film in an excellent trilogy isn’t quite the knock-out I hoped it would be. It’s a good film, but not a great one. It won’t exactly leave anyone disappointed, but it doesn’t quite send the entire trilogy out on as triumphant a high as hoped. Part of the problem is that I just found it a slightly more straightforward, less thematically rich than the other films. It’s more of a simple “revenge” story, married up with a host of film genre references from Apocalypse Now to Westerns to old-school Hollywood Biblical epics.

The title suggests a bit more action than the film actually offers. The war, such as it is, turns out to be almost a macguffin – a feud between rival groups of humans rather than an ape-human smackdown. It’s actually the most internalised conflict yet – the war to decide the sort of planet the apes will inherit is in the soul of the sort of leader Caesar will decide to be. Like all revenge dramas around sympathetic characters, the big question is will our hero decide to lay aside vengeance – to be the better man. It’s a tribute to the film that the answer is as difficult and unclear-cut as you expect the question would be.

As this film, more than any other, is ape-centric (there are at best three human characters), it rests even more than on the strength of Serkis’ acting. It feels unoriginal to say it now, but what Serkis has achieved is astonishing. He has turned a special effect with an actor behind it into a living, breathing character – someone you never doubt is real. His performance is a complex internalisation, as far away from flashy as you can get – it’s all about the eyes, and Serkis’ shine with life.

It’s lucky that Serkis is  here, as he elevates the entire film to a higher level, where otherwise it can occasionally  feel like a careful assembly of bits and pieces of other films. Caesar and gang’s journey through the snowy depths of North America looks and feels like a spaghetti western. By the end of the film, Caesar feels like a Moses figure leading his people to the promised land. The biggest influence by far however is Apocalypse Now. The soldiers all feel like angry Vietnamese war vets, the opening battles through the forest have a definite air of the jungle, while Woody Harrelson’s slightly underpowered villain is so reminiscent of Kurtz, he even does a Brando impersonation at points. The structure of the film even matches Heart of Darkness, Caesar on a trek “down river” to confront a rogue soldier turned cult leader.

It’s not exactly unique and recycles much of its content, but Reeves is still a damn fine director and not only shoots with dynamism, but also ensures there is heart and depth behind everything. There is a subtle understory of ape civil war, with the followers of Koba now serving the humans out of an “enemy of my enemy” mentality. Making the Colonel the leader of a maniacal cult also makes him a good contrast with Caesar’s standing with the apes. At least two characters develop in ways far different than you are led to expect, due to clever playing with the viewer’s expectations of how movies are “supposed” to pan out.

So why doesn’t it all quite work as well? If it’s so full of good stuff, why doesn’t it sing like the others? Well maybe it’s a little too long. Maybe the Colonel isn’t quite a good enough antagonist for Caesar. Maybe the grim mood and focus on the revenge arc mean some of the thematic richness of the previous films has been lost. Maybe there just isn’t quite enough “humanity” in this story of apes. It’s hard to put your finger on – but it’s just not quite as good as the others, not quite as memorable. It’s a strong well-made film, very well directed and superbly acted by Serkis and the other motion capture artists – but it’s not quite the classic it feels like it could be. You’ll be slightly unsatisfied but find it hard to work out exactly why.
Email ThisBlogThis!Share to TwitterShare to FacebookShare to Pinterest
Labels: 2017, Andy Serkis, Matt Reeves, Planet of the Apes, Science fiction, Steve Zahn, Toby Kebbell, Woody Harrelson