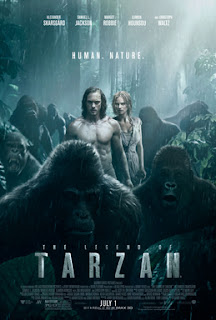 Every so often you seriously wonder what the point of a film was. Are movie studios so desperate for a franchise that literally anything that has any kind of name recognition is considered a money-spinning franchise in the waiting? Welcome to the latest feeble attempt to jumpstart an epic franchise: the first (and surely last entry) in the Tarzan-verse.

In the late 1880s, the Belgians are carrying out terrible acts in Africa, spearheaded by ruthless Captain Leon Rom (a painting-by-numbers Christoph Waltz). To get hold of diamonds held by an H Rider Haggard gang of natives, he needs to lure Lord John Clayton III (better known as the legendary Tarzan) back into the jungle. But John (Alexander Skarsgård) has tried to put his life as the King of the Jungle behind him (for reasons never really made clear) and only once his wife Jane (Margot Robbie) is put at risk does he begin to reclaim what he has lost.

Was there any real demand for a Tarzan movie? Perhaps even more to the point, was there any audience for one? Since, I imagine, today most people only  on-screen Tarzan viewing experience was watching the Disney animated version, it’s hard to understand who the makers of this film imagined was going to engage with a confused, clichéd movie part dull origins story, intercut with a “rediscovering your roots” plot. And that’s the first of the major errors the film makes.

So determined is the film not to jump straight in with the context of who Tarzan is, that it keeps dribbling away from the actual plot to cram in small (confusing) moments establishing who his parents were, how he met Jane, how they left Africa etc. etc. etc. This stuff is far more interesting than any of the tiresome diamonds / kidnapped wife / White Man Saving Africa nonsense in the main plot, making all the “main” action feel like a sidetrack; not to mention that you’re several flashbacks in before you have any idea how Tarzan has ended up as a stuffed-shirt sitting in a clichéd London, slurping tea with his little finger extended, rather than swinging from vines in the jungle.

The film assumes a level of Tarzan-legend knowledge in its audience I sincerely doubt most viewers had, and the lag while you wait to catch up through the flashbacks is frustrating. The final product is a confused mess with no clear vision about what film it actually wanted to be. If it film wants to deal with the legend, why not just do that – and if it wants to introduce the origins, why doesn’t it just do that? Instead it’s neither one thing nor the other.

Mixed in with some feeble, faux superhero heroics is some clumsy post-colonial criticism of the Belgians’ terrible Congo record, but it goes nowhere in particular. A week on from watching it, I can’t remember what it was about at all. Stuff sort of happens, and there is a vague idea Tarzan is trying to save the Congo, but the film never kicks into gear. Events happen without any real narrative thrust – our heroes and villains literally meander down a river towards no-where in particular. It doesn’t help that almost every narrative beat in the film is completely predictable – this is the epitome of safe, uninspired film-making and storytelling, as if everything has been carefully honed in focus groups and committees.

A large part of the problem is Skarsgård’s lifeless performance in the lead role. Clearly bulging muscles and decent features were all the part really required, because there’s nothing in the way of character. He’s supposed to be a man who has lost touch with his past, confused and ashamed about his background. The film is building towards his emotional acceptance that his gorilla mother was his true mother. It’s a viable, if not especially original, plot – but it falls flat, simply because Skarsgård just isn’t interesting enough. His stilted performance conveys no inner pain or turmoil. Who cares who his mother was? Skarsgård doesn’t seem to, and neither did I.

It doesn’t help that all the rest of the actors (I mean all of them) are more interesting, eye catching presences. Jackson and Waltz are such seasoned pros they invest their paper-thin characters with their own charisma, though each of them could do what they are asked to here standing on their heads. Margot Robbie is actually rather radiant as Jane – even though she is never much more than a (defiant) damsel-in-distress.

The Legend of Tarzan is, at best, okay. It’s desperate to turn Tarzan into some sort of all-action superman, a competitor for the Marvel universe. But it focuses so much on trying to fill out the backstory and beef up the action that it fails to make a film with any characters in it we really care about. Instead this is the blandest, B-movie cornpuff you are likely to see and so instantly forgettable you’ll barely remember each scene as you watch it. It's enjoyable enough but totally unsurprising, uninspired and fundamentally totally forgettable.
Email ThisBlogThis!Share to TwitterShare to FacebookShare to Pinterest
Labels: 2016, Action Films, Alexander Skarsgård, Christoph Waltz, David Yates, Djimon Hounsou, Jim Broadbent, Margot Robbie, Samuel L. Jackson, Simon Russell Beale